LJI 10 Week 5: Knots in the Unraveling of My Past

A note from Alyce: Since writing this entry, further research has led me to conclude that my family is not related to the Carter family from Virginia. In fact, my ancestor, George Carter, was an immigrant from Bucklebury, England, which is currently where my path ends for that line, exactly the same place it did for my grandmother. However, I am hoping that since he was Quaker, I will be able to get some assistance from some genealogical socities in England that focus on Quaker ancestry. When I make new discoveries on the Carters, I will post about them and link to them here.

I have also determined that my paternal great-grandfather was not Marvin Beard Eustler but his uncle, George W. Eutsler III, who was a co-owner of the Eutsler Brothers, a business that offered both building contractual work and a lumber mill. I will post about him in a separate entry and link to it here.

How fitting, I always thought, that my father's mother, a librarian and genealogist, bore the name Grandma Heritage. Thanks to her second husband, the only man I ever knew as my Grandpa, she'd gained a highly appropriate surname. For her, researching our family history meant uncovering gems, proud moments to share with us all.

Through my grandma, Miriam Marshall Wilson Heritage, I learned about our Quaker ancestors: on her side, the Marshalls, Pennocks and Mendenhalls, who attended the Longwood Meetinghouse near Philadelphia and, in the case of the Mendenhalls, ran a stop on the Underground Railroad.

Not only that, she'd said, we had family connections through our biological grandfather, John Omer Wilson, to James Wilson, a signer of the Declaration of Independence and one of the first Supreme Court justices, as well as to two presidents: Woodrow Wilson and James Buchanan.

Occasionally, Grandma acknowledged some information which made her slightly uncomfortable, though she preferred not to dwell on it. My Dad, like me, loves knowledge for its own sake and was therefore perversely proud of the fact that, on his side of the family, he'd had ancestors fighting on opposite sides of the Civil War. "Imagine if they had met each other in battle," he speculated with a twinkle in his eye. "We might not exist!"

Grandma Heritage, however, had little patience for such speculation. She wanted her research to make us proud, to inspire us to lives of altruistic service, of righting injustice, of being guided by an unfailing ethical compass. I'm almost certain that's why she left out some very important things, data points that might spoil the narrative.

Decades after Grandma's death, and shortly after the death of our mother, our father told us about his father's true lineage. We were not, in fact, direct descendants of the Wilson line, as John Omer Wilson had not been born until three years after his mother's husband. Even though William S. Wilson appeared on his birth certificate and on, indeed, all his legal paperwork, he was instead the illegitimate son of a local logger who would one day run a lumber company.

This year, in part to solve the mystery of my great-grandfather and in order to fill in our family history, I began using Ancestry.com. Before long, I tracked down my best guess for our biological great-grandfather, Marvin Beard Eutsler. I tried, with little success, to fill in more of that side of the family, but my searches on my great-grandmother, Fannie Weaver Wilson, came up empty.

Fortunately, my Dad possessed all of Grandma's genealogical papers, so this past Thanksgiving, exactly one year after I'd first been clued into our family's more complicated past, I asked him to bring me the box. Sorting through the folders, I eventually found Grandma's hand-written family tree for Fannie, and I filled the names into my own online chart.

Until Christmas, I focused just on filling in the branches across all the different lines, going back at least five generations, so that I could surprise my siblings with a framed family tree poster. I was only concerned, at that time, with filling out the tree and didn't get around to looking for other documents related to those individual ancestors until later.

For those unfamiliar with Ancestry.com, here's how it works. You can plug in information for individuals you know, such as a name or birth date, and then use that information to search for online documents which could tell you more. If the site locates documents that may relate to a given individual, you will see a green leaf in the corner of that individual's profile. Clicking on the green leaf shows you a listing of the documents, which you can open to determine whether to add it to that individual's profile.

One day, just before Christmas, after the family tree posters had been ordered, I was idly clicking on green leaves within Fannie Weaver Wilson's branch. They were, I discovered, the family who had fought for the Confederacy. In fact, her father -- my second great-grandfather -- John William Weaver (1827-1910), served as a private in Company D, Virginia's 5th Infantry Regiment, enlisting in 1863. Looking into their unit's history, I discovered they had fought in the Battle of Gettysburg. Fortunately, Grandma Heritage's direct ancestor, Milton Marshall, was fighting elsewhere at the time.

I even found a photograph that another user had uploaded of John and his wife, Sarah Catherine Buchanan, wearing the serious expressions required for photographic portraits in that time, clutching an even more serious-looking dog. John had, I felt, a bit of a twinkling about his eyes, nevertheless. I couldn't blame him, living in Augusta County, Virginia, for fighting on what I'd always been told was the wrong side of that conflict. 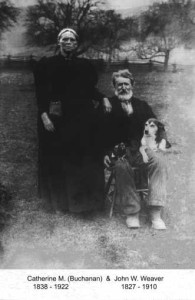 A plantation, huh? Maybe it was just a fancy name, I told myself. Maybe he was a farmer with grandiose ideas, and the term didn't mean that I thought it did. My sinking suspicions were soon proved dreadfully correct. 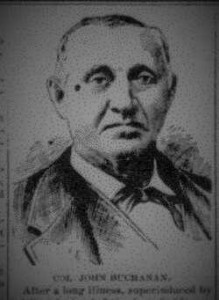 As I learned, Colonel John Buchanan was a leading figure in his county, serving as first a surveyor, then a sheriff, militia leader, judge and community leader, with the county's largest town eventually named after him. All of these represented achievements that would have made Grandma Heritage proud. But she would not like some of the other information I learned.

In 1860, there were separate census records termed "slave schedules," and Col. John was listed as the owner of a 27-year-old male, a 20-year-old female, and a 1-year-old male. A little family, perhaps? When Colonel John died, he bequeathed to his daughter Mary, wife of William Thompson, "one negro woman" along with some land. I inhaled sharply, feeling queasy. An ancestor of mine had owned slaves.

Colonel John's son, Captain James Patton Buchanan, inherited some property from his father, although indirectly, as most of it was initially left to his two older brothers, one of whom died fighting in the American Revolution and the other while fighting Native Americans. Upon his death in Kentucky in 1808, an inventory listing for James included, beneath the cows, mares, horses, and hogs, "a negro woman named Eve, a negro woman named Dinah, a negro boy named William, a negro boy named Hamon (?), a negro girl named Rise and a negro girl named Tamar (?)." I found myself wondering who these people were, where they had ended up, where were their descendants. Had they been family members? Did they stay together, or were they split up? I couldn't sleep that night.

Researching further, I learned the son of Captain James, John Buchanan (1785-1866) didn't seem to own slaves as a rule, although he might have inherited one from someone other than his direct line. In the 1810 census, when he was 25, the census records only five free white persons, which would be himself, his wife and his first three children, including my ancestor James Wilson Buchanan. In the 1830 census, his household contained 12 free white persons, reflecting his growing family. In 1840, the census records a John Buchanan with 12 household members, one of them a female slave between the ages of 55 and 99. I'm not sure how she joined the family, but it's possible that she was inherited from another family member or perhaps a neighbor. By 1860, John was living with his son John Alexander Buchanan and John's family, with no slaves in the household.

By the time that Fannie's father, James Wilson Buchanan, grew to adulthood, my direct line was completely out of the slave-holding business. In the 1840 census, which only listed the heads of households along with a breakdown of free people and slaves, his household contained only 7 free white persons.

Should I be surprised that Colonel John Buchanan, a contemporary of George Washington (also a colonel at the time), would own slaves? In fact, Washington visited Colonel John's plantation in 1756. If the colonel had lived longer, instead of succumbing to illness at age 45, he might have fought in the Revolution, alongside his son. Many of the Founding Fathers owned slaves, which were seen as being necessary for working large tracts of land (much like undocumented immigrants are today). But to me, this sort of justification feels like hypocrisy. I was raised differently.

At about the same time, I discovered, in Grandma Heritage's files, a copy of a letter she had sent to a cousin. He was doing research for a cook book he intended to write based on family recipes. Upon request, she related to him some reflections on her family and their relationship to food. She also mentioned a fact I had never heard before: that her mother had lost eight children in addition to the four who survived. Quickly, she urged him not to include that information in her book. "You should focus on positive things," she told him. Which is why, I suppose, she never told me any of this, if she had, indeed, discovered it.

Still, I believe that it's important to know the full truth if you expect to truly understand anything. As ugly as that truth may sometimes be, knowing it opens your eyes to the complex nature of life and human nature; of patriotism and hypocrisy; of mixed motives, the compartmentalizing of morality, and the tyranny of the status quo. To be proud of my family history, I must also accept the shameful parts. And as I educate myself on its complexity, I see the truth in a saying I will paraphrase here: You cannot choose your family, but you can choose what inspiration you will draw from it.

While this entry focuses on my Dad's side of the family, my Mom's family contains some people who would make Grandma Heritage proud, as well. About two months ago, I looked through a packet of genealogical information prepared by one of her cousins about the Hamptons, who were the family of my twice great-grandmother. An ancestor in that line, Ethan Hampton, helped write and signed a key Quaker document making an argument against slavery.