Taste of the Arts

The Gryphon and I decided to check out the Lansdowne Arts Festival on Saturday. We'd never attended it before, because it seems we're always out of town when it occurs. 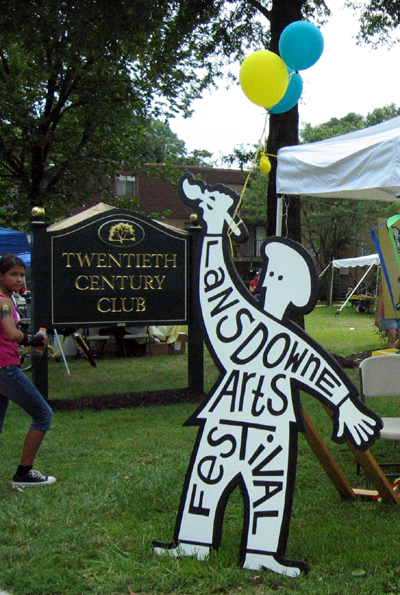 We had no trouble finding a parking place at the train station. First, we walked towards the municipal lot where they hold the farmer's market, because the information we'd found on their Web site said that all the musical performances would be at the "farmer's market stage." But there was nothing going on there, so we retraced our steps and headed for the tents at the 21st Century Club, where the Celebration Theater produces plays several times a year.

A friendly festival volunteer pointed us towards the main stage, which was kind of hard to miss: under the biggest tent.

We were hungry, so we got some burritos from Mission Burito, who had a stand outside on the front patio. Then we found seats at a table under the big tent, where the musical performances were being held. We ate while we listened to some music.

Jon Turk [site has music] was the first act we heard. He's an R&B singer, and we agreed that he has a good voice, although he seemed stiff and awkward on stage. If you closed your eyes and listened, he sounded really good during the first several songs, even filling in with patter about the songs he was performing. Watching him, though, he seemed like the shy guy at a party who happened to have a good voice. 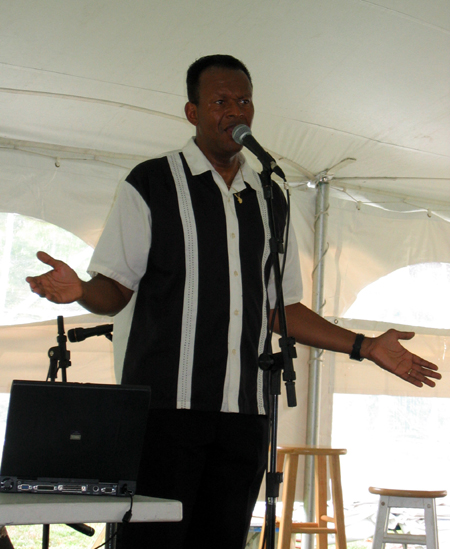 It didn't help that he was using prerecorded music as his accompaniment (probably from a karoke application), and between songs, he scrolled through selections on his laptop to click on the next song! Even stranger: he clearly had some support people with him, and you would think he would have asked one of them to sit on the side of the stage with the laptop, selecting his next song.

We agreed that Jon Turk should look for a couple backup musicians, since live accompaniment would make for a more interesting dynamic on stage and might help alleviate some of his awkwardness.

He also needs to be more careful with his song choices: while he started with '60s Motown songs that he sang very well, he then moved on to some songs that were too high for him, as well as some songs from the '70s that didn't seem to fit his style or his vocal abilities.

After he was done, we walked inside the building to check out the art. A lot of the artists were jewelery makers: much of it beaded jewelry that didn't excite me. There were a number of artists selling prints, oils and watercolors, as well as art photography and notecards.

One artist, Matt DeProspero, was even painting next to his stand. I talked to him for a little while. He was painting a portrait of a teenager who'd been a victim of violence, as part of a project where artists create these portraits for the victims' families. 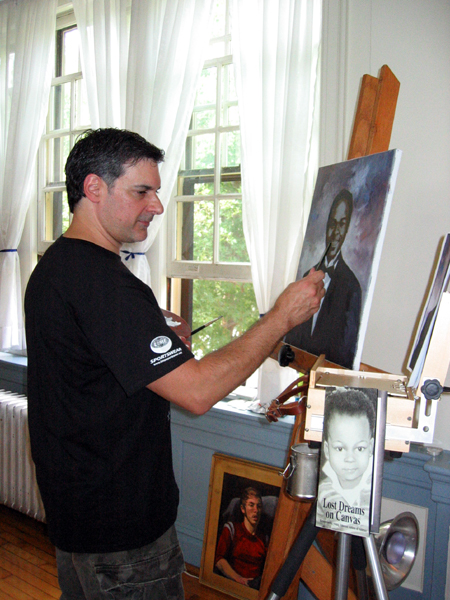 Then I found a booth that really interested me: Martha VonRosenstiel, who was selling beautiful jewelry made with a fused glass process. The colors were really vivid, and the abstract patterns looked chic, I thought. I got myself both a pair of earrings and a necklace with some of the birthday money my Dad had sent me.

Speaking of art, when I went downstairs to look for the restroom, I discovered that since I'd last been there, they had painted the walls of the basement to resemble a garden pathway. 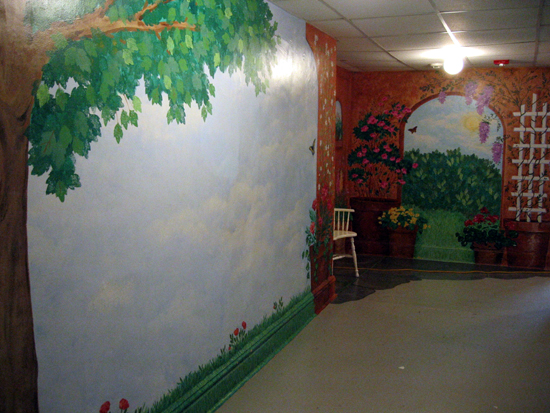 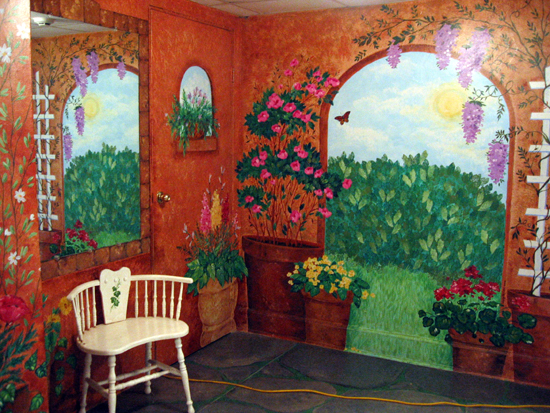 The Gryphon and I then shared a piece of Mexican chocolate cake that a bakery was selling in the lobby. It was delicious, with just a little spiciness that added some heat to it.

Back at the tent, another band was performing, this one a blues band, 2nd Chance Blues. They consisted of three guys: Randy Barnett on lead vocals and lead guitar, Ed Lindbergh on backup vocals, guitar and bass; and Jim Harris on percussion. 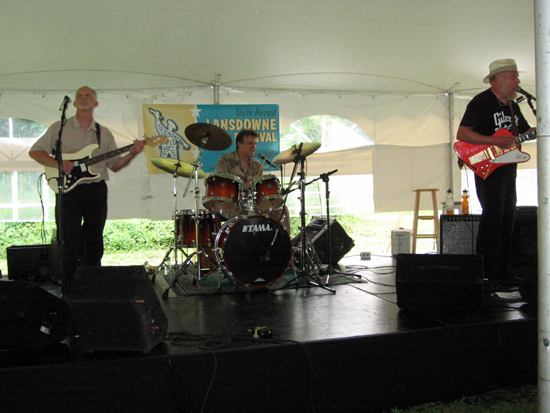 They performed a lot of blues and rock standards as well as some song original blues. By contrast to the first act we saw, they were much more comfortable on stage. Plus, Barnett had a nice, gravelly, bluesy voice and sometimes had fun with his solos. In a white Panama hat and a black T-shirt, he really looked the part. 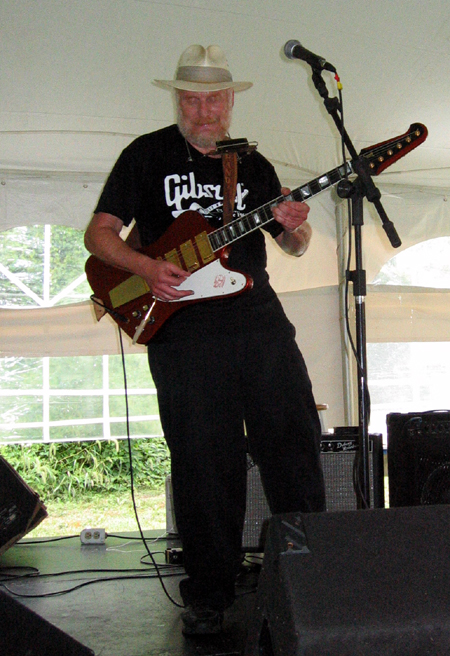 Then, since I wanted to finish the issue of Wild Violet, we headed out, stopping at the video store on the way home to trade in a mailed-in video for a new one. I usually pick most of the movies, so I told The Gryphon to pick. He selected 21, which we haven't yet gotten around to watching.

Back at home, I finished up the issue, which took a bit longer than I'd expected. Both The Gryphon and I were engrossed in what we were doing (he was playing a videogame on his laptop), so we didn't even realize how late it was getting.

Finally, we headed out to a restaurant for dinner about 7:30. We ate at Romarco's in Clinton Heights, an unassuming Italian place with good food and a welcoming atmosphere. This time, we were seated on the enclosed back porch, which like the rest of the restaurant, was decorated in a folky style with lots of reds. In the next room, some people were having a birthday celebration, and one woman laughed joyously, her high, bubbling laugh periodically piercing our conversation. I had the linguini with clams in red sauce. While I had to do a little work to get all the clams out of their shells, I enjoyed it and even had plenty to take home.

That evening, we watched the new Morgan Spurlock movie, Where in the World is Osama bin Laden? The movie was light-hearted, not at all a political diatribe. In it, Spurlock traveled throughout the Middle East, tracing bin Laden's history, talking to both people who might actually have information about bin Laden, as well as people on the street. He did this in a very entertaining way, and in his conversations with people often found common ground through laughter. The movie also included some animation, similar to Super Size Me.

Rather than just looking for bin Laden, Spurlock also sought people's opinions about the United States and about Islamic fundamentalism. While he did encounter some hardliners, most of the people he ran into were much more open-minded, which is probably the most valuable lesson from this movie.

Sunday, I sent out a notice to the Wild Violet mailing list about the new issue, as well as did a little work for money. Then The Gryphon and I watched the first disc of Das Boot, which I had added to our Blockbuster queue when I saw it on a list of 100 Top Movies, circulated amongst some friends on LiveJournal. Blockbuster listed it as two discs, but that often means there's a movie on one disc and extras on the other. I'd put them both on the list but hadn't moved the second one to the top of the queue yet. Of course, at the end of this disc, it said, "Continued on Disc 2," so I immediately moved the second disc to the top of the queue. We should get it in a couple days.

We wanted to go to dinner, then, and be done in time for The Gryphon to attend the PAGE (Philadelphia Area Gaming Enthusiasts) meeting. Our plans went awry. We decided to go to Mad Mex, one of our favorite places, a colorful, creative contemporary Mexican place in University City. But they were closed for rennovations, so we walked a short distance to the White Dog Cafe. In the entrance to the dining room, we were greeted by a portrait of Madame Helena P. Blavatsky, a well-known spiritualist and one-time resident of the home. The cafe was named after a miraculous cure Blavatsky enacted to save her leg, which was infected and doctors said might have to be amputated. She said she had a white dog sleep across her leg at night, which cured it in no time.

Unfortunately, we had no such miraculous experiences on Sunday. Long story short, there was a computer error, and our order got overlooked. Consequently, nobody realized, until we flagged our waitress down 40 minutes later, that our food hadn't been prepared. The manager explained the problem and offered to give us the entrees for free. She was very apologetic about it, and we told her not to worry.

When the food came, we agreed it was worth the wait. I had the Baked Flaky St. Peter's Fish, and The Gryphon had a steak dish. By this point, The Gryphon was way late for PAGE, but he'd already called to let somebody know, so we stayed and split a dessert of chocolate mousse on a cookie and peanut crust with homemade whipped cream.

It's a good thing the restaurant comped our entrees, though, because when we returned to the car, our meter had expired, and we had a $26 parking ticket!

I dropped The Gryphon at his meeting but had only gotten a few blocks away when he called me to ask me to pick him up. Turns out that The Dormouse had canceled the game that The Gryphon was supposed to be joining. So it wouldn't have mattered how late he'd arrived, he wouldn't have been able to play. I guess it all works out in the end.

Since I'd been planning on starting to write My Wedding, My Way: Real Women, Real Weddings, Real Budgets, The Gryphon told me to go ahead and work on it. I hammered out an introduction and let him read it. He had a few suggestions but liked it. I'm feeling really good now about having accomplished something.

Moral:
I find it easier to enjoy myself when I've accomplished some tasks first.