A note from Alyce: Since writing this entry, further research has led me to conclude that my family is not related to the Carter family from Virginia, who were descended in part from the Skipwith family. In fact, my ancestor, George Carter, was an immigrant from Bucklebury, England, which is currently where my path ends for that line, exactly the same place it did for my grandmother. However, I am hoping that since he was Quaker, I will be able to get some assistance from some genealogical socities in England that focus on Quaker ancestry. When I make new discoveries, I will post about them and list them here. But unless my George Carter had connectionns to the noble Carters, who didn't live terribly far away but travel was more difficiult back then, it's unlikely I'm actually related to President Carter.

therealljidol). The topic was "Salty." 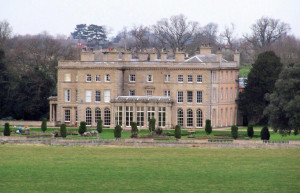 About to season her lamb, Lady Diana paused mid-movement, shaker in hand, when her brother Grey burst into the dining room. From the perspiration on his brow, she knew immediately something was dreadfully wrong.

"They've killed the King!" [1] he gasped, out of breath. "We must be on guard. Who knows what Cromwell will do next?"

Lady Diana glanced around the opulent dining room, taking in the heavy brocade curtains, the candelabra, the furniture made by skilled craftsmen. "Does father know?" she asked.

Grey grabbed her by the shoulders, and up close she could see how damp his curls were from running. "I will tell him when he returns, but while we discuss what to do, please stay here. Everyone knows our household is loyal to the king, and Cromwell believes he is God's right arm. Who knows what atrocities he could commit, driven by such a belief? We may need to flee." [2]

Lady Diana grew pale. The fork fell from her hand. "But where? How?"

"France? India?" he said, for the first time sounding uncertain. "Father and I will talk. Stay close, and watch out for Anne, John and George." Their younger siblings were under her care while their father, Henry, was taking care of business in Manchester. He was due to return that evening, hopefully with his neck intact.

The meal cooled on Lady Diana's plate, but she could only take a few bites, her stomach doing somersaults. She pushed away from the table, peering out the front windows onto the large expanse of grass. Her father loved to recount the story of her taking her first steps in the garden until, startled by a bee, she'd fallen solidly on her rump. How could she live any other place but Prestwold? [3] Sighing, she pressed her face against the cold glass until she heard the sound of her father's carriage, returned to the front gate.

In a relatively short time, Lady Diana could barely believe how much her life had changed. Her father had cut back on many of the staff at Prestwold, the serving folk who, in medieval times would have eaten at lower tables in the Great Hall, "below the salt," so to speak. [4] Due to the demands of his second wife, Blandina, and her children, the baronet's money had dwindled. Then, in a final injury, due to his loyalty to the deposed king, their father had suffered a penalty from Parliament, who had declared him a "delinquent" and fined him £1,114.

As she walked with her brother, Grey, he explained the dire situation. "I'm afraid, dear sister, the time we have been anticipating has finally arrived. Father is unable to pay the fine, and he will be forced to sell Prestwold." In the past year, her brother's finery had grown more restrained, as he'd been forced to adapt to the reality of these times. Still, despite it all, his curly hair shone with evidence of care. Her brother, she knew, was not one to give up entirely.

"What shall we do?" she asked. "Go to Chilham?" Her father owned a quarter of Chilham castle through their late mother, and their extended family would be obligated to take them in.

Grey scoffed. "Go to Kent, in arm's reach of Parliament? That would only guarantee they'd hound us further."

Lady Diana, who had been twirling a blue-violet chicory flower in her fingers, asked her brother, "Where, then?"

"Father has told me that he and Blandina plan to stay at the Winter Plantation in Machilipatnam for now. [5] For you and I, however, adventure awaits!" Peering into his eyes, Lady Diana could not tell whether he looked excited, frightened, or slightly mad.

"Adventure?" she asked, with trepidation. "Whatever do you mean?"

Lady Diana tucked a chicory flower behind her daughter Katherine's ear. The flower's burst of color stood out against the girl's chestnut waves. Lady Diana loved to tell her daughter stories about the girl's first steps on a rough-hewn floor, "when we were mere pioneers," as she liked to joke.

Truly, though, Lady Diana knew how lucky she had been. She'd heard the sad news of her father's passing, a pauper in India, through her husband, who in turn had received a letter from her brother, Grey, settled on the other side of the Rappahannock. Upon their arrival, she had marveled at the river's languid beauty, and pondered how odd it was to exchange Prestwold's green fields for this wet majesty. In the years since, she had become accustomed to the river's lulling sound, and even to the hiss of insects along the banks, so different from the stoic crickets of her childhood home.

Similarly, her place in life had changed. She had gone from the cosseted daughter of an English baronet -- who had always, truth be known, preferred penning verse to managing his estate -- to being the doting wife of a passionate man, so active in local politics it seemed a year didn't go by without him acquiring another position. Major Edward Dale, a royalist like her father and her brother, was ambitious, outspoken and hard-working, qualities she admired greatly. And if he sometimes treated their indentured servants harshly, he showed nothing but kindness to her and their children. [7]

Once more, she sat at a great table, although the room that encased it bore no room for servants to eat. Her ancestors would have been shocked, she knew, but perhaps proud, as well. Unlike her brother Grey, who had inherited the title of baronet, if not their ancestral home, she needn't concern herself with such trifles. In this moment she only watched the sun glint off her daughter's white cotton dress, as they skipped side-by-side through a Virginia meadow. [8]

The Rappahannock River in Virginia

1 King Charles I (1600-1649) was the monarch of England, Scotland and Ireland from 1625 until his execution in 1649, being usurped by Oliver Cromwell, an English military and political leader who led a civil war against Charles I. Charles I had enraged much of the country by fighting with Parliament to retain more power for the royal crown. Back to the story


2 The Cavaliers -- or royalist supporters of Charles I and, later, of his son Charles II -- were known as much for their fashions as for their politics. According to the court fashions of the period, they wore their long flowing hair in ringlets, sporting brightly colored clothing with elaborate trimmings, lace collars and cuffs, and plumed hats. After the beheading of King Charles I, many of them fled the country, heading either for continental Europe or elsewhere, such as the Virginia Colony in the United States. Back to the story


3 Prestwold was the home of the Skipwith family, which included Sir Grey and Lady Diana and their father, Henry, who was a baronet and, incidentally, also a poet. Back to the story


4 "Below the salt" refers to the practice, in the Middle Ages, of the precious seasoning only being placed on the table for the nobility, who sat at higher tables than their servants. By Lady Diana's time, the mid-1600s, natural rock salt had begun to be mined commercially and was less expensive than salt derived from sea water. Yet, she would likely be familiar with the term and its origin. Back to the story


5 Machilipatnam, India was a major trading port for the British, Dutch and French in the Seventeenth Century. Sir Henry Skipwith, whose Prestwold estate was seized by Parliament in 1653, died in Machilipatnam in 1658, having lost much of his money due to the spending of his step-children from his second wife, Blandina Pennen, widow of John Acton. Sir Henry lived out his last years at the Machilipatnam estate of his friend, Sir Edward Winter, a co-founder of the East India Company. Back to the story


6 No records exist as to the exact date that Lady Diana and Sir Grey Skipwith arrived in the Virginia Colony. However, it is believed they emigrated sometime between 1650 and 1652, as Lady Diana married Major Edward Dale in Virginia and gave birth to their first child in 1652. Back to the story


7 Major Edward Dale, like many royalists and English landed gentry who helped settle the Virginia Colony, relied on the work of indentured servants to work their lands and grow the tobacco which became a second form of currency. For poorer immigrants, this represented an opportunity to gain a foothold in the new world, as they were often promised a parcel of land once their time of service had been completed. A contemporary court case related how one of his servants threatened to beat Major Dale with a hoe if the Major attempted to strike him (or whip him). The court sentenced this servant to an extra year of service. Back to the story


8 Major Edward Dale and Lady Diana Skipwith Dale were my 9th great-grandparents. Katherine Skipwith Dale went on to marry Captain Thomas Carter, another early settler and friend to Sir Grey Skipwith. Ironically, their descendant, Ruth Carter, would marry my third great-grandfather, Milton Marshall, who was from a family of Quakers who opposed all forms of forced labor. Back to the story

Information for this creative non-fiction take on my ancestors' emigration to America came from these and many other genealogical resources and historical sites: