therealljidol). My topic was "Surrender Under Protest." 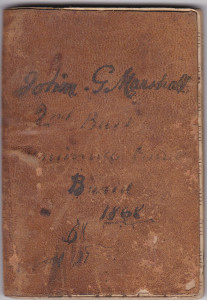 The front of a music book, reading John G. Marshall 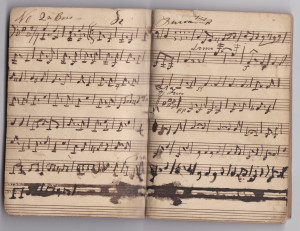 Through the violin, he spoke. A cadence at first in adagio, slow and plodding, then an allegro gallop of dissonance and counterpoint, followed by an elegy in harmony. His wife, sometimes, would accompany him on voice. His dark-haired granddaughter, toddling into the room, watched with wide eyes. She had inherited, he thought, his son's kind eyes. He met them with his own, conveying to her through music the things he could not -- would never -- tell her.

On the first day's march, the young men of the 15th Pennsylvania Cavalry marched from Nashville on the Nolansville Pike, feeling almost relaxed. To young John Graves Marshall, whose heart was light in the bright sunshine, the ride was quite enjoyable. Up on his trusted horse, he felt safe: after all, to a mounted man, foot soldiers posed little danger. Despite a few close shaves, his company was unhurt.

"It's like fox hunting," one of his friends told him, and he had to agree. So easy it seemed, but not for long.

As they neared the Confederate Army in Murfreesboro, the young men charged forward, yelling, as John would describe it later, "in the highest glee." They ran through the wood and up to a fence, where they encountered the Confederate infantry, and then came disaster.

The rifles belched fire, and John's brothers-in-arms fell. One was pierced with fourteen bullets. Others were met with volleys right in their faces. As John would later recall, "Men seemed to fade away like frost before the morning sun, and many empty saddles was the sad result." The worst moment was when he witnessed his dear friend, Sergeant Frederick Herring, shot through the head, riding right next to John at the time. "He lingered in the saddle a moment, then fell with a thud to the ground, and his blood saturated my shoulder." At that instant, John's gray horse was shot and fell on John's leg. The rest of the battle he witnessed, he saw from the cover of his steed as he fought to free himself.

If only that had been the worst suffering he would encounter. Wordless, his music told his granddaughter about his later capture, the long march to Andersonville. A muddy dirge, this part of the tale. Washing in a river, despite the winter cold. Coarse corn or uncooked food. Inadequate shelters. He and his fellow men survived by making tents out of their ponchos, three foot high and with no ground cover.

This musical slog put a look of concern on his granddaughter's face, so he was glad he would not have to explain to her in words how the men would draw straws for the dead animals who would sometimes float down the stream, devouring them raw.

He ended the piece with a flourish of celebration, a triumphant arrival home, free to enjoy Pennsylvania green.

His brothers never forgot him, and one day, after he had played his final note, his funeral procession was met by members of the 15th Cavalry, described by a newspaper reporter as "fine looking well preserved men." They would carry on his song. 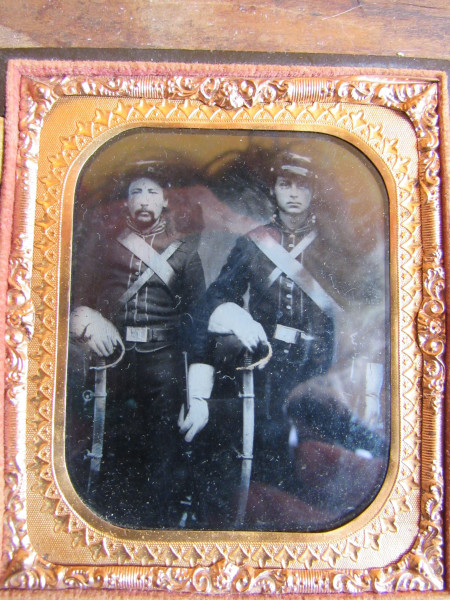 John Graves Marshall, at right, and an unidentified friend and fellow member of the 15th Cavalry


My great-great-grandfather, John Graves Marshall, died when my grandmother, Miriam Ivy Marshall Wilson Heritage, was only 2. She wrote that he loved to play the violin, and she preserved some of his violin music, written in his own passionate, strong hand, with the genealogical materials she collected and which I now possess.

John gave an account of the battle of Stone River, which I've paraphrased here, in "History of the Fifteenth Pennsylvania Volunteer Cavalry Which Was Recruited and Known as the Anderson Cavalry in the Rebellion of 1861-1865" by Charles H. Kirk. The details about life in Andersonville Prison Camp, where the Confederate soldiers kept captured Union soldiers, comes from a fellow soldier, in that same book.

You can click on the photos above to see larger versions.

The voting page is now online: http://therealljidol.livejournal.com/1012526.html. Remember: if you do not have a LiveJournal account, you can login in with Facebook or Twitter account in the upper right-hand corner of the page. Then refresh (or reopen) the link, and you'll be able to vote!