This is my entry for this week in LJ Idol, Season 10 (

therealljidol). The topic was "Invitation."

One week until they arrive, bouncing through our door carrying presents selected and wrapped by their parents. A cadre of energetic children, ready to celebrate my Kung Fu Panda's birthday. Hopefully, with my planning and experience, we can avoid another disaster.

This time, we're going old-school, holding a car-themed party at our place, with games and crafts. Ten six- to seven-year-olds running around a two-bedroom apartment, making car sounds. What could go wrong, right? Trust me. Things will go wrong. Even when you're certain they won't, things go wrong.

Kids' parties and I have a history.

Rather than reliving each "adventure" in excruciating detail, let me share a few of the lessons I've learned from my forays into planning kid fun over the years.

• If you're not paying in advance for ponies, don't count on them. I found this out at KFP's fourth birthday, where we told everyone to meet us at a local park for a picnic. In the invitations, we'd promised to pay for pony rides, which are indeed offered at the park every weekend in season. However, we didn't read the fine print on the park website revealing that the ponies are not offered on certain holidays. Apparently, Father's Day must be one of them.
• If your kid's birthday falls near Father's Day, and you want to have your party in a park, rent a pavilion. At the same park party mentioned above, we arrived too close to the start of the party to grab the tables we had hoped to claim. You know, the ones near the grill that we had to use to make our hot dogs and hamburgers? Lesson learned.
• If your kid's birthday falls in June, don't plan the party for a place that has no air conditioning. For KFP's first birthday party, we invited a few friends and family members to a party at my Dad's apartment. On the second floor of an old brick building. With no AC and very little air ventilation. Result: one very sweaty little birthday boy.
• On the subject of heat, if you order special cupcakes from the bakery, and they have light, sugary icing, don't leave them in a hot car trunk for very long. They melt. We discovered this at KFP's second birthday party, where we invited two of his buddies to a really cool playground but then discovered that we were not allowed to bring food past the front gates unless we were holding an officially-sanctioned party.
• If you plan to celebrate your birthday at a public site such as a really cool playground, without making reservations, check the public schedule for conflicting events. On the day we'd chosen, we were unaware that their annual fundraiser was planned for that evening, with the playground being closed early to prepare. We took the boys to a grassy area across from the parking lot, where they ate gooey cupcakes with melted icing.
• If you want to celebrate your birthday by inviting a couple friends to a public event, such as Spend a Day with Thomas the Tank Engine, don't count on your friends staying with you. Or, in fact, seeing them after you eat a picnic lunch together in the parking lot.
• Planning a pool party at the YMCA for summer splash fun? Make sure you read the fine print. Having attended a "gym party" at the YMCA, where a staff member led the kids in group games, I expected a little private pool time with a staffer leading them in water fun. What I got: the opportunity to crowd in with the rest of the swimmers during open swim, with one extra lifeguard provided for our protection, who stood quietly at poolside the entire time.
• If you want to have the easiest possible party, go for one of those all-inclusive places. Last year, we did a mini-golf party at Putt-Putt Golf. They provided pizza, cake, decorations, a staffer to lead activities, and tokens for video games. I just had to show up and take pictures.

Here's the biggest tip. Yes, things will go wrong, but the kids will enjoy themselves anyway. On his first birthday, KFP dripped sweat but still had a blast. On his second birthday, after we'd evacuated to the grass outside the playground, the boys ate their cupcakes and ran around in a spontaneous game of tag until they got tired from all the fun.

On his third birthday, KFP was so enchanted by Thomas the Tank Engine that he barely noticed that his friends had disappeared. On his fourth birthday, my husband spoke to the people who had rented the pavilion, which turned out to be a church group, and they let us use the grill to make our hot dogs and hamburgers. The kids didn't get pony rides, but they did enjoy the party games I led and had tons of fun playing on the nearby swings and slide.

At his fifth party, the kids enjoyed swimming in the crowded pool, smiles on all their faces as they splashed around with the help of their parents. Afterward, we had build-your-own-sandwiches and cake upstairs in the community room, which we got all to ourselves.

The truth is, I'm not really worried about this upcoming party, even though it's a week away and I still have to finalize plans for the cake, decorations and games. You see, I've learned it's almost impossible to truly ruin a kids' birthday party. Resilient, flexible, fun-loving and open-minded, kids will enjoy their time together, no matter what. 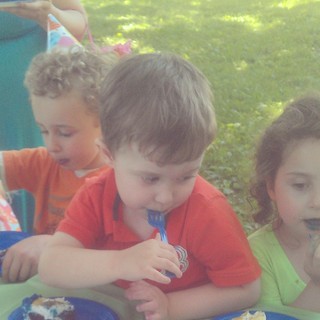 KFP enjoys cake with friends at the no-pony party