therealljidol), Season 10. We got to choose one of two topics. I chose "Trespassers William."

Kitty had learned to fly. She wasn't quite sure how it happened, but it was an exhilarating experience. In fact, she felt a bit like a fairy princess, and she heard sweet music streaming through the air around her as she flew.

Her friends -- Gunmachan, Bunny, Chief and Harry -- were amazed. After a while, however, it started to tire them, so they tried to get Kitty to come down and join them for a tea party.

Kitty said, "I'll be there in a minute. I'm not quite sure how this works." And she flew upwards instead of down. "Watch this!" she called, and swooped over the tea cups, making them all clatter.

Chief said, "All she has to do is reduce her velocity and aim her nose in a downward position. Then she will fly downwards."

In a sensible voice, Chief replied, "Velocity means speed. Everyone knows that, or at least everyone who knows anything." Chief was the oldest of the group, despite being a Huskie cub.

Kitty tried what Chief suggested but kept spinning around in the sky, with sweet music following her every move.

Gunmachan, the cutest horse you've ever seen, busied herself placing plates and directing the others in putting treats out for everyone. Harry and Bunny happily assisted, while Chief sat in a corner calling directions to Kitty.

"You need to increase your drag," Chief shouted. "Put your paws out wide and stretch out all the toes."

Widening her paws as much as possible, Kitty found herself spinning backwards instead of down. "I think I'll just stay up here for a minute," she said. "The clouds are so pretty." She tried to sound like she was doing it on purpose.

Gunmachan said cheerily, "Tea is served!" She sat at her place, and Harry and Bunny took their seats, as well. Chief was still calling out commands to Kitty.

At this point, Kitty had more or less given up. She nodded agreeably and pretended to know what an air foil was. "Yes, I'll try that," she said. She hoped that eventually, she would start to descend by accident, which was, after all, the way she had begun to fly.

Bunny said, "Chief, why aren't you sitting down with us?" Bunny shook his white ears in the direction of the table. He was wearing his favorite green shirt, which was also his only shirt.

Chief barked, "I'm directing Kitty. She is not listening!"

Harry, whose full name was Harry Elephante, munched on a chocolate chip cookie. She was a blue elephant with green feet and a very floppy body. But her short, stiff arms made eating anything rather challenging, so she had to focus.

Suddenly, Kitty plummeted out of the sky. "I'm coming down now, I think!" squealed Kitty. "I'm going to have a tea party, too!" She plunked into a wicker chair, and immediately found both a cookie on her stomach and a bottle of milk popped into her mouth. To herself, she thought, maybe I'm thinking too hard. I shall try to stop. She made her mind calm and quiet, but she still heard a small, sweet voice singing with her every move.

Gunmachan, who had already finished her tea and cookies, and put her plates away, announced, "Now it's time for music practice!" She led the way to a little grove containing all sorts of colorful toy instruments.

Everyone but Kitty put down their forks and followed, but Kitty called, "I'll be there momentarily. I'm still having a bottle, apparently." She tried to dislodge herself from the wicker chair, but found it as difficult as not flying.

Meanwhile, in the Music Grove, Bunny hummed on the kazoo, Gunmachan plinked the keyboard shaped like a cat, Chief bounced on the drum set, and Harry played three instruments at once, running back and forth between them.

All of a sudden, the bottle fell out of Kitty's mouth, and she felt herself speeding through the air again until she reached the Music Grove. There, she plopped down onto the blue keyboard. "I'll be playing this," she announced to no one in particular. The keyboard began playing recorded music automatically, and she rocked back and forth, hitting random keys with her nose and tail, trying not to think how odd it all was.

Together, the music of the five friends was both chaotic and beautiful. Then, while dashing between instruments, Harry accidentally tripped over Gunmachan's foot and crashed into the drum set. Chief grumbled, "Harry, why did you do that? You ruined my backbeat!"

Startled by Chief's angry voice, Harry ran over to a tree stump and shrunk into a small ball.

Gunmachan stopped playing the cat keyboard and comforted Harry. Bunny, who was still happily humming, noticed the others stopping and walked over to see what was going on.

Kitty, meanwhile, kept flopping back and forth on the blue keyboard. "I'll be there in a minute," she said. "I think." Then, a couple of flops later, she added. "It might be a while."

Having calmed Harry, Gunmachan suggested that everyone have some quiet time in the big purple hammock. She took Harry's hand and led her to the hammock, then lifted her in and gave Bunny a boost, too. Chief said he didn't need any help and leaped in, crashing into the other two. Gunmachan shook her head with disapproval and climbed in next, being careful not to bump anyone.

At the keyboard, Kitty sighed. "I shall join you after I finish this song," she said, hopefully. Then, just as she thought the music would never end, she felt herself shooting forward towards the hammock, where she landed on Gunmachan's head. "Sorry about that," she mumbled. "I'm having one of those days."

As the morning sun grew warmer, the friends drifted off into a relaxing sleep. Even Kitty felt renewed and more like herself.

For the past week, we have been on a family vacation, staying at my sister's house with her family, my brother's family, and my Dad. In this story, I have tried to capture the personalities of the five children, as embodied by my son's nighttime buddies along with Harry, his car buddy. The events of the story were loosely based on playtime between the cousins, where they did actually play with the plush friends and enacted many of the actions in this story.

Gunmachan represents my brother's daughter, an outgoing, bubbly, creative 10-year-old who loves art and silliness. She is also very nurturing, much like Kanga in the Winnie the Pooh tales.

Chief channeled my brother's son, a 12-year-old boy with a scientific mind whose personality reminded us of Owl from the Winnie the Pooh stories.

Bunny is my bouncy boy, KFP, whose relentless energy and good attitude brightens a room. He is most like Tigger.

Harry Elephante, while a boy in real life, in this story embodied the spirit of my sister's oldest, a 5-year-old girl who is soft-spoken and adventurous, but also very sensitive. She reminds us of Piglet.

Finally, Kitty has become the adored favorite of my littlest niece, my sister's youngest girl, who is 2. She wants you to know she is a big kid. A flaxen-haired whirlwind, she wants to be a princess and is in love with Kitty. In the story, Kitty evoked Winnie the Pooh. My youngest niece herself is a lot like Roo.

Many thanks to KFP (

kfp_rawr) for being my co-author for this entry. 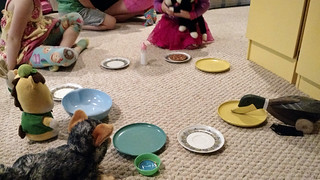 The animal friends having a tea party 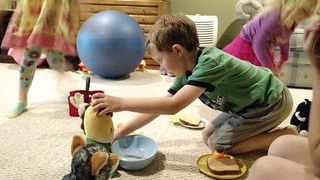 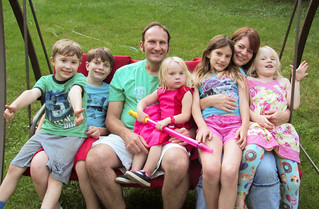 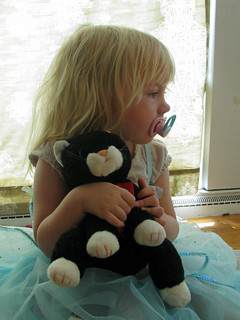 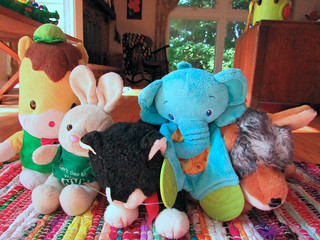 ETA: The poll is now open! Here's the link: http://therealljidol.livejournal.com/1027086.html. Remember, if you don't have a LiveJournal account, you can login with a Facebook or Twitter account at the top of the page. Then refresh (or reopen) the voting page, and you can vote!