My husband and I attended your show in Easton, Pennsylvania, this week. We dashed in late and were led to our seat in the dark, to be immediately surrounded by laughter. I had never seen "The Holy Grail" with such a large audience before, and it was wonderful to be part of such a communal experience, even if it did occasionally involve people shouting "Ni!"

The Q&A afterwards was entertaining and elucidating, by turns. But it was your answer to the final question that made me think of the letter I've been meaning to write you for seven years. The moderator asked you, out of everything you've done, what you hoped would be your legacy, and you wryly replied your cats. They are, after all, extraordinary Maine Coons.

As fabulously silky as your cats may be, I would humbly suggest your legacy extends well beyond the feline population. Indeed, beyond even parrots.

Perhaps I'm biased, as a former president of the Penn State Monty Python Society, but I happen to believe you've had a great deal of influence on many humans, as well. Using myself as an example, I firmly believe it was fate that led me to cast my gaze up during an Amnesty International club meeting to see the Monty Python Society flyer. (Fate likely also played a role in making the speaker that night so tediously boring.) As in an old movie, my undergraduate life converted in that moment from scratchy black and white to glorious Technicolor.

A montage of wacky meetings, skits, campus pranks and late-night writing and gab fests later, in my sophomore year, we hit an unexpectedly nasty bump. As the world mourned the loss of your friend and writing partner Graham Chapman, I wrote to you on behalf of the MPS. You stunned and touched us by taking the time to write back, in a hand-written card, about the memorial service. Even our famously garrulous group sat attentively and listened to every word of that letter, and for once, no one jumped up to try to upstage me.

Fast forward (mumble) years, and I moved to Philadelphia, in part, to be near some of my MPS friends. Through them, I would meet my husband, who reminded me a lot of the MPS crew, an important difference being that I hadn't known him long enough to consider him a brother. At our wedding in 2007, when a fellow MPS alum we called Attila the Pun stood up to give an unplanned speech, he made my husband an honorary Penn State alumnus. (He also surprised us all by giving a speech long on laughs and short on puns. You think you know a person...)

Our son, whose online nickname is Kung Fu Panda (or KFP) due to his extraordinary kung-fu action grip at birth, has a few years to go before he'll get the full Python experience, but he has been introduced to Mr. Gumby and to the Ministry of Silly Walks. One of our favorite things to do is to have silly walks competitions, and another is to tell composite stories, a favorite party game of the MPS crowd. He was a bit disappointed to learn we wouldn't be taking him to see you speak about "The Holy Grail," but I don't think he's quite ready to see the Black Knight scene or Castle Anthrax yet.

For the past seven years, when I had a free moment, I've been meaning to write a little letter to tell you how much your work has enriched my life. Then I would usually take a nap, while my son continued to bounce around the room, expending the endless energy he somehow leeches from me. But after attending your Q&A, I thought it was about time that I shared this little story with you and thanked you for all you've meant to our family, before my son is old enough to write it himself. 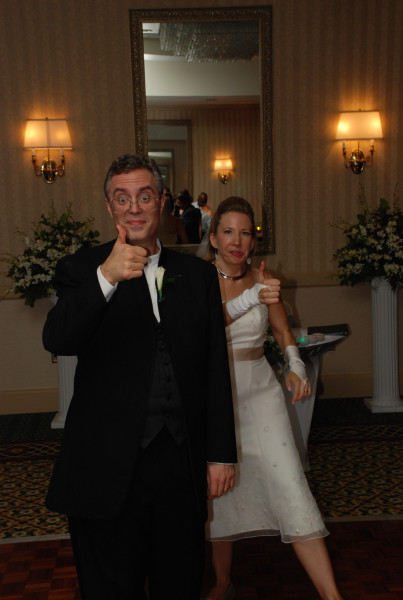 >
Mike and I give our wedding cake a thumbs-up 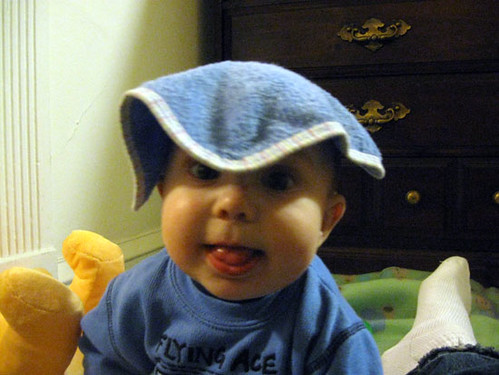 Evan as a baby, his brain hurt! 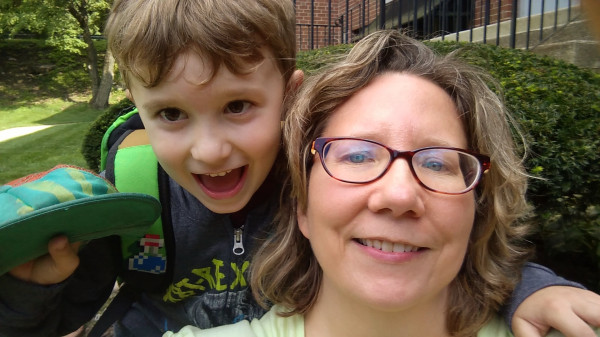 KFP and me a couple weeks ago, with his friend Mr. Hat

P.S. I have it on good authority that at least one MPS member will be in the audience to see you at the Tower Theater this Friday, so if you get a remarkably intelligent question from a guy named Joe, it's probably him.

And now for the silly version of KFP's naming: https://alycewilson.livejournal.com/274790.html