This is my LJ Idol (

therealljidol) entry for Week 0. The topic is Introduction. 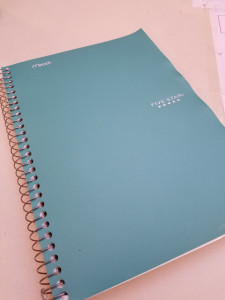 My Mead Five-Star notebook with the aqua vinyl cover could tell stories about me. Nearly as old as my fourth-grade son, my aqua companion has followed me anywhere a keyboard couldn't for the past nine years. Usually with a pen (black ballpoint preferred) tucked into its spiral, Mead is beat-up, heavy with ink and still open to new experiences.

Flipping through the first section of the two-subject notebook is like a Cliff's Notes of my life. The first entry, dated June 14, 2010, chronicles an odd dream I had shortly after my husband and I brought our son home. The handwriting is even worse than my usual cramped mess -- loose and light, the pen barely kissing the page. A sure indication of both sleep deprivation and, most likely, the painkillers I was still on to deal with postnatal pains. Next page contains a list of ingredients for the three dishes my Mom and sister had made and stuck in the freezer for me, to last me through the baby boot camp that is a newborn. This was after my son began to suffer from gas pains so severe that the pediatrician recommended I cut out foods that are known to produce gas. All the food had onions in it, which was forbidden, so my husband had to cook every meal for me, as I recovered on bed rest. We had no TV in the bedroom, and in those days, no streaming sites on the computer. I listened to the local public radio station all day long, wrote, nursed, napped, and watched the undulating leaves in the trees outside our rented rowhouse in suburban Philly.

Then, some pages of notes during Otakon 2010 (the annual convention celebrating East Asian culture, particularly anime), when I ran Press Relations while my sister served as a live-in nanny in our hotel room. After that year, I took a couple years off as the head of Press Relations, feeling guilty about all the attention it had taken away from my new baby.

A couple of pages of food tracking, before I moved to an app on my phone. I lost 20 pounds almost immediately, still above my pre-pregnancy weight, but I've since gained it all back plus 40 more. I blame age and stress.

Pages of notes from writing panels I attended at that year's Philcon (the annual science fiction convention where my husband and I are panelists) were followed by a handwritten LJ Idol entry, the first of many filling my buddy Mead in these past nine years of parenting. I often find myself writing on the sidelines of my son's activities, like today, in the library as he participates in LEGO Club.

Then, seven pages of poetry, with lines crossed out, but not so much you can't see them. I prefer to write poems by hand, so you can see what you cut out. Sometimes scrapped lines turn up in another work later.

A jump, then, to five years later, notes from a parent meeting before my son, whose online nickname is Kung Fu Panda or KFP, started kindergarten. Mead has chronicled many such events, and since I jump around between the sections in the two-subject notebook, Mead lacks chronological cohesion, flitting about like memories.

Next, a couple short personal narratives about my parenting experience. I don't remember now whether they were for LJ Idol or for the parenting book I shelved indefinitely because of what comes next. 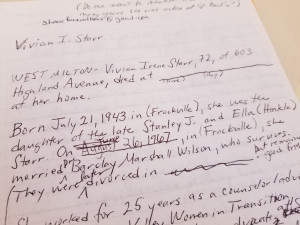 In extremely sober print -- the way I write when I need to make sure someone can read it, unlike my nearly indecipherable crazy-grandmother cursive handwriting -- is the first draft of the obituary for my mother, Vivian Starr, who died suddenly, just before Thanksgiving 2015. After that begin pages and pages of notes dealing with estate business: talking to my lawyer, a list of things to do, finances and expenses, the phone number for the pastor who would perform the funeral. So many people attended the service for my 72-year-old mom that I wished she could have seen how many people showed up to honor her.

More Philcon notes, because we attended it in 2015 anyway, between her death and the funeral. I simply needed something normal away from the misery. (But misery followed me.)

Three more pages of estate notes, an inventory of the valuables within her house. Then a letter to my Mom, and a poem inspired by her. At the bottom of that page, more estate notes.

A page of notes from the first-grade preview, where the school administrators spent more time talking about disciplinary programs than about academics. This marks the date I decided for sure to move us into a better school district. We found an apartment in a nearby suburb with a much better school by late summer, just in time for first grade.

A page of catalogue numbers corresponding to my Mom's hundreds of art pieces, listing the ones my Dad felt should make it into the retrospective art show we hosted a few years after her death, on what would have been my Mom's 75th birthday.  My parents had remained friends, and Dad's apartment above his osteopathic practice served as long-term storage of my Mom's artwork until the show, after which my siblings and I divided them up. Mom would have been a little irked by the way my Dad roamed the art show, talking to visitors about her work. But by then, her wife had taken her bitterness to the opposite end of the country, so there was no one present to object. As I watched him lauding the ethereal light of Mom's pastels and watercolors, I could tell my Dad had never stopped loving her.

That's the last page in the first section of the notebook, and a good place to stop. If I kept going, you'd discover more poetry, the catalogue of my mother's art, a few haphazard journal entries, and notes from my genealogical research. In the past four years, I've found comfort in unraveling the ever-fascinating tapestry of my family's past. Like an archeologist, delving into the details of the people who made me me, and the me that writes in Mead.
Tags: family, kfp, lj idol, lji
Subscribe