therealljidol). This week, the topic is "Impossible."

As a genealogist, I love a puzzle. Give me a family story with an iota of information, and I'll put on my deerstalker hat and track it down. I love to get Zen, let the thoughts stream in, until I figure out how to suss that information out.

My first customer, if you will, was my brother, who asked me to track down my grandmother's cousin, Merlin Hinkle. Our mother had told us, growing up, that he'd been a flying monkey in "The Wizard of Oz." We had a couple black and white photos of him, as a young man, in a clown costume, one marked "Merlan" by my Pop-Pop. But our mom wasn't around any more to answer questions, and my brother wanted details about Merlin's career so he could nominate him for a national clown hall of fame. Without making any promises, I eagerly took the case. 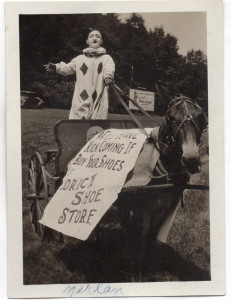 Merlin Hinkle as a young man in a clown suit, in a cart pulled by a pony

Painstakingly, I wove through the documents and family trees distant cousins had created on Ancestry.com, laboriously working out Merlin's exact connection to our family (son of my great-grandfather John Hinkle's brother, Joe). I did a little victory dance and dove back in to see what else I could determine.

By the time I'd finished, I had found a cousin who shared more than I'd ever hoped to know, including a story of how Merlin's older brother had rescued him from a fire when they were both children. That fire, tragically, claimed their mother's life. She also shared with me a slew of other newspaper articles about Merlin, who it turned out went by the stage name Shorty Hinkle, due to his diminutive size. Armed with that information, I found a plethora of photos on clown history sites, showing Shorty both in costume and even putting on his makeup, and I shared all of that with my grateful brother. 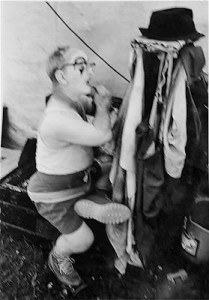 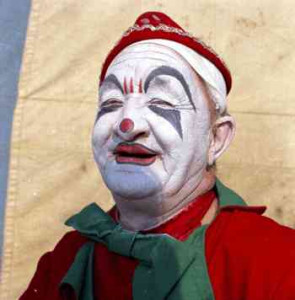 That first mystery got me hooked on genealogy, and humming the theme from "History Detectives," I entered my paternal grandmother's genealogical research into my online tree and started venturing down other blind passageways.

My Dad handed me the next mystery, admitting over wine at the first Thanksgiving after my Mom's death that, in fact, my paternal great-grandfather was not William Stuart Wilson, husband of my great-grandmother, Susan Frances Virginia "Fannie" (Weaver) Wilson. In fact, Dad confessed, my grandfather, John Omer Wilson, had been born three years after William's death. John's father, according to my grandmother (who had relayed the story John told her), was a logger named Eutsler who later owned a sawmill in my grandfather's hometown, Grottoes, Virginia. This mystery Eutsler had offered to marry Fannie, but for reasons left to history, she'd declined.

"A Eutsler who ran a sawmill in Grottoes, Virginia?" I declared over my wine. "That should be easy to crack. I'll take the case."

Thankfully, my intuition proved correct. The combination of a small town and unusual last name led me to the right family within a relatively short period of time, thanks to census records. Then, through newspaper archives, I narrowed down my search by looking into specific family members and their professions. After a red herring or two, I concluded with near certainty our ancestor was George W. Eutsler, co-owner of Eutsler Brothers, a lumber and contracting business. Importantly, he was unmarried at the time my grandfather was born, while his brother and business partner was not. I deduced it was far more likely that an unmarried man would propose to Fannie than a married one.

To confirm the results, my Dad and I took DNA tests. Sadly, George (possibly heartbroken?) never married or had other children (at least, none that history records). But his siblings did. One of our closest links turned out to be a descendant of one of George's brothers. She reached out to my Dad, and I told her about our family story and my research. I worried she might throw my magnifying glass back in my face, but she agreed that my theory sounded plausible. She sent me a photo containing George and all his siblings, the first image I'd ever seen of him. While she doesn't know exactly which one is him -- recognizing only her own ancestor -- I am awed to see a photo that definitely contains my great-grandfather George. A number of them, to my mind, definitely resemble my grandfather John. 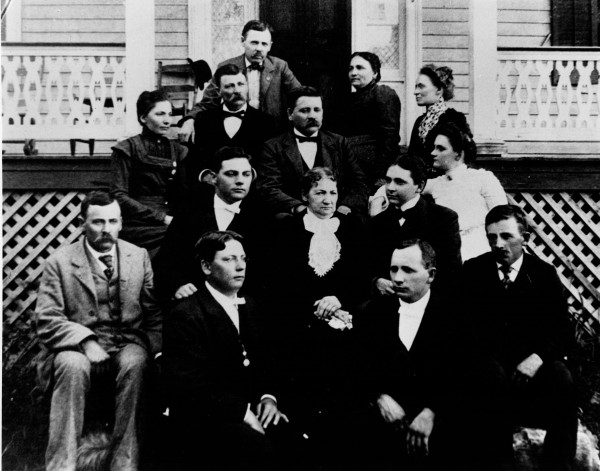 So far, my most challenging case came from my mother-in-law. The assignment: to track down her biological father's line. Her parents divorced when she was young, and because of ugliness associated with that divorce, her mother had not told her much after her father's family. My mother-in-law had been adopted by her stepfather, who came from a distinguished New England line I found easy to trace. After sharing that information with her, I asked her if she wanted to know more about her bio dad, and she said she did. All she knew about him, though, was her grandparents' names -- Susan Sterling Nash and William Anthony Miller Sr. -- and that they were born in Connecticut and New York City, respectively.

Unwinding this mystery seemed nearly insurmountable. "I'll see what I can do," I told her.

Susan Nash's side turned out to be easier, because I had a family story to start with. Reportedly, Susan's father had been a doctor in the small town of Bridgeport, Connecticut, and had delivered Charles Sherwood Stratton, a.k.a. General Tom Thumb, the little person who had helped make P.T. Barnum famous. Intriguing, I thought, and a perfect place to start.

After combing through records, and reading a biography of Stratton, I realized the timing had to be wrong. Stratton had been born more than a generation before Susan, so if there'd been a doctor in her family, it had to be Susan's grandfather or great-grandfather, not her father. After combing through online databases of records, I eventually determined that Dr. William Burr Nash was most likely the doctor in question, possibly assisted in Stratton's birth by his son, Dr. David Hull Nash. What's more, Dr. David Hull Nash had a son, Andrew, who had a daughter named Susan Sterling Nash.

Despite Susan's vain habit of perpetually making herself a year or two (or three or four) younger on official records, I was able to definitely link her to the Susan who married William A. Miller, thanks to an engagement announcement that also listed her father and hometown. At that point, it was just a matter of writing up all the copious information on the Nash family, who it turns out were original colonists to some key towns in Connecticut.

While I'd found a contemporary account to Stratton's time saying there was only one doctor in Bridgeport, "a Dr. Nash," it still bothered me that I couldn't definitively confirm the family story. I continued fleshing out my tree, filling in Nash descendants and hoping to eventually find someone alive whom I could contact. That work brought one of them to me, as one of the Nash cousins contacted me after seeing my family tree. She confirmed the story, telling me that her family has handed down a piece of custom-made furniture which reportedly had belonged to Tom Thumb himself.

William A. Miller Sr., however, remained elusive. As you can imagine, a lot of William Millers lived in New York City at the turn of the 20th Century. Fairly early, however, I lucked out and found a census record for the couple, living in Manhattan shortly before their only son was born. This Susan S. Miller was born in Connecticut, and the husband born in New York, and their birth years matched what I knew, in Susan's case, and surmised in William's case. From this record, I learned both his profession -- real estate broker -- and the approximate date they'd married (1899). Although newspaper searches turned up a lot about William's real estate career, nothing else emerged.

The Miller line became a nagging cold case for me: a dead end I was continually banging my fists against, trying to find a door. Whenever I had the inclination -- like sitting in the bleachers at my son's swimming class -- I'd search through hundreds of documents online, hoping I'd find a lead.

Branching out my search, I Googled various combinations of names, dates and other specifics, hoping for a clue. I got one: an online Miller family tree with a very familiar name and approximate birth date: William A. Miller, born in New York City in 1873. What's more, this William's father was named Anthony, which seemed a likely name for the father of a man whose middle name was Anthony. I contacted the man who had created the tree to ask him for his thoughts, and he said that he didn't know much about this William, being descended from another branch in the tree, but that he would do his best to help.

With renewed vigor, I plunged myself again into the newspaper archives, turning up a wedding announcement that appeared almost exactly a year after the engagement article, on Monday, January 30, 1899, in the "New York Journal," saying that the wedding of Miss Susan Sterling Nash and William A. Miller would take place Wednesday at the Protestant Episcopal Church of St. John, Bridgeport. That would make the date of the wedding February 1, 1899. With this information, I ordered a copy of the marriage license for Susan and William, which would finally reveal his parents' names: Anthony and Ruth (Hardwicke) Miller. It also revealed his birth date (6 July 1873) and birthplace, Bayside, New York.

Lo and behold, this was indeed the same Anthony as the one who appeared in that online tree, giving me the rest of the Miller line all the way back to Germany. I also learned that Anthony Miller was quite the colorful character. Known as the Smiling Alderman, he'd been involved in New York politics during the Tammany Hall days but had found his conscience and been instrumental in bringing down Boss Tweed. Afterwards, he'd run a hotel and bar on Long Island that became a popular social club for New York City politicians and other notables.

The Miller cousin confirmed for me that William Sr. had been buried in the family's Brooklyn cemetery plot, although his grave had never been marked.

The cold case officially closed, I made my final report to my mother-in-law, but my nine-page write-up on William included the questions that still remain unsolved. Why did Susan and William wait 11 years to have their only child, in 1910? Why did they separate by 1920 but remain officially married until Susan died in 1940, though she lived in Massachusetts by then and he still lived in New York?

Was he the William Miller, occupation "broker," living in Manhattan with a wife named Mary in 1930? And was it true that they had married in 1899, just like he and Susan had? Had he, in fact, been a bigamist who had been discovered? And why were this William and Mary childless? What did William do after 1924, when he left his real-estate firm and dropped out of the newspapers? Why did none of his surviving relatives, including his son, ever buy him a tombstone? These questions continue to nag at me, tantalizing me.

No matter how many facts I reveal, I often wonder, is there more to this story, more than I could ever imagine? However much you know the facts of a person's life, how much is it really possible to know?