therealljidol). This week is an Open Topic, meaning we can write about anything. 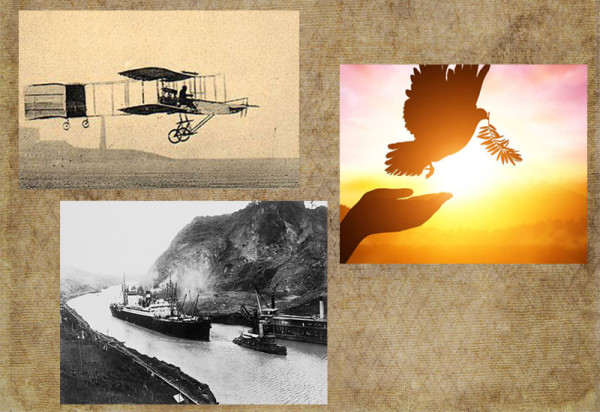 A collage including an early airplane, the opening
of the Panama Canal, and a dove representing peace

As a Christmas present for my father and my siblings, I put together a collection of poetry written by our ancestor, Dr. James Meredith Mathews (1817-1910). About 10 years ago, while I was working on my own poetry book, Picturebook of the Martyrs (2010), my father handed me a folder of my 3x great-grandfather's poetry. I instantly read through the contents of the battered pocket folder. Inside were several typed poems on onionskin paper, which I now believe were typed up by my grandmother, Miriam Marshall Wilson Heritage, copying them from yellowing slips of paper, which Dr. Mathews had had professionally printed, most likely by a small, independent printer. I once dated a guy whose father did similar work, so I know that, in the days before desktop publishing, many people who wanted to print leaflets, pamphlets, or chapbooks would go to a local printer to have them set and printed.

Dr. Mathews wrote his poems to be shared, or at least the poems in this collection of poetry, which almost exclusively comes from poems that he'd previously had a printer publish on slips of paper, or which appeared in the local newspaper in Reading (rhymes with "breading"), Pennsylvania. I happened to find the additional poems by searching an online newspaper database for his name. Excited to see poems by him that I'd never before seen, I included those in the collection, as well.

After adding a preface about his life, and an appendix that included genealogical information about his branch of the Mathews family, I published the collection as "Reading's Physician Poet" in December 2019 on Amazon.

Dr. Mathews wrote with strict rhyme and meter, much in keeping with his time. I particularly like the poems he wrote towards the end of his life, contemplating his own mortality. As I read "When I Would Die," written in December 1906, four years before his death, I found myself wanting to answer him, to give him the answers he wanted to learn. So, in my own style, I will answer him, thought by thought.

When I Would Die
By Dr. James Meredith Mathews

With Response by Alyce Wilson

I’m very old, yet would not die,
And have my bones in slumber lie,
Until I know some things are done
Whose doing is but just begun.

My middle years whip
through red-shifted space. Expanding
to take in all my hope, spun
into my son, playing spaceships on the floor.

I’d like to know our eastern sea
Had kissed her western majesty
At Panama and Colon’s gate,
And let our ships, both small and great,
Pass through Dame Nature’s narrow strait.
Would then I die? Not yet, not yet!
My heart on other themes is set.

Completed four years past your last
day, Grandfather, Panama's canal
has sped thousands ocean to ocean. Today's
expanded lanes carry Panamax ships,
gigantic for your time (and ours). Trade,
a bigger deal than ever. Understanding,
not always close behind.

I’d like to see the airships fly
Athwart the clear and cloudy sky.
With or against all winds that blow,
With or against all rains and snow;
Sailing through the angry clouds,
Bearing safely human crowds
From place to place, from town to town,
Now high aloft, now coming down,
Now taking on, now letting go
Its hurrying crowds bent to and fro.

20th Century pioneers at Kittyhawk
(and other hops) perfected aviation
in time for air-to-air combat
in the Great War (a devastation
only four years past your passing). Then
new aviators experimented on instruments,
perfecting flight in time for the Second
World War in 1939. Your great-granddaughter
Miriam lived to see the first commercial
aircraft, forged from all this bravery.

I tell you Cap, I must be there,
Some hours ahead of that slow poke
That belches forth its cinder smoke—
The iron horse whose murderous noise
Kills off the sick, the well annoys.
Some better is the trolley ride,
Ten times as good the airships glide.

You'll smile, grand Doctor, to learn
that soon after you departed Earth
gasoline ascended. Cargo
disappeared from smoky trains, moved
by truck instead. In the 1940s, Miriam glided
on a diesel electric locomotive
to work each day in Washington, D.C.

My eyes have seen millennium
dreams, more ordinary
than you'd think. No flying
cars, no robot friends (perhaps those thoughts
postdate you by a bit). But still, the truth:
Humanity has work to do.

Then heaven will be upon this earth
And every creature have new birth.
Then, sure, you’d willing die? But why
Would one in glory wish to die?
O wondrous, wondrous are to be
The achievements of futurity.

A pause, a breath to contemplate
what I should tell you
of our silver, gleaming, speed-bent world?
Not to disappoint your dreams of peace,
I'll stand here by your shoulder,
to look toward that brighter day.

A special thanks to

sorchawench for proofing the book for me, just before Christmas, on short notice. I am much indebted to her!