This is my entry for this week of LJ Idol ( 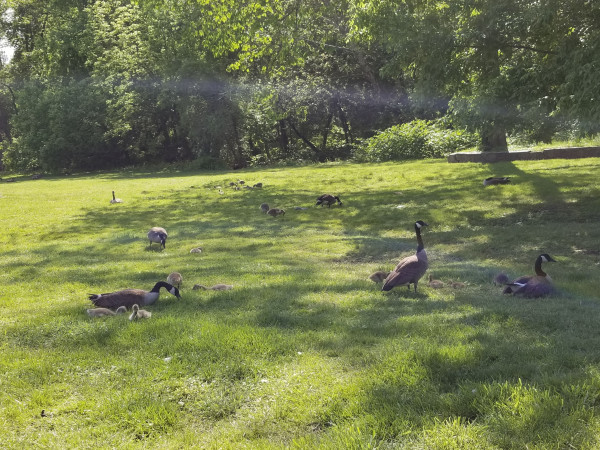 The babysitter goose, looking alert amongst the flock

Call me the Babysitter. You'll recognize me in an instant: the vigilant one, standing tall over the brood of fluffy gray goslings, only a couple of which are mine. I may seem calm, but don't be fooled. Always at the ready, I'll fly at you in an instant, a fierce ball of feathery rage. I could knock out a hawk in two seconds. Don't test me, buddy.

How'd I get this position, you might wonder? Could it be that I'm the most responsible one in the flock, the one that everyone trusts with their goslings? No, it's more like I can't stand to see the other parents slacking. Like Belle and Schuyler, the newest couple to mate. They're so new at parenting that I was babysitting them last year.

After their little guy hatched, they got so excited they honked right in his little face, almost blew all the fluff off his head. Afterward, they didn't have a clue what to do. They led him to an open plot of grass, then turned their back on him to eat. He would have been easy pickings for an enterprising predator.

I sauntered by. "Gus can join my nursery school," I told them. Without waiting for an answer, I gave the newest flock member a firm nod of the head, and he followed me back to the other goslings with what sounded like a relieved peep.

Belle called after me: "We hadn't named him yet, but I guess Gus is good enough. Thanks!"

While this job might seem tedious, let me reassure you that it is anything but. Not only do I have to watch for predators, but I also monitor the two-footers when they walk along the stone pathways near our creek. Although they are mostly harmless, they can be unpredictable and foolish. The two-footers' goslings like to feed bread to my brood, so I allow them to get close enough to toss it. But I make it clear through my constant vigilance not to step one foot too close. Never take your eyes off the two-footers, I say, even if it means turning your neck nearly 360 degrees to watch them go by.

As our goslings get older, they eat more and I have to hire some help. Usually, I ask Seneca and Amelia, who have lived almost as many summers as I have. They help me usher the goslings across the wide stretch of black rock to the upper green fields, the ones between the giant red homes of the two-footers. Fortunately, the two-footers know who runs the place. When we cross, they stop their big moving metal boxes to let us go by safely.

Woe to the two-footer who does not show me the proper respect. I have ways of getting what I want. Only the other day, a big, white metal box made a loud blaring sound at me as I was crossing. I turned my head to regard it quietly, and slowed my pace. Later that night, I sat on its cool, transparent front and gave it a whitewashing.

Under my care, our flock produces the finest goslings around, always tops in flying and navigation. When they grow old enough, I help run flying practice in the wild fields on the other side of the creek, where we can work with fewer distractions. I'm proud to say that we've taken home the top honors at the annual geese convention we attend every fall for a couple months. The goslings I raise find the best mates, who join our flock and fly back with us, as soon as we feel like it's time.

Truthfully, we don't really mind the snow. We like our quiet creek, where the winters tend towards mildness. Our two-footers, most of them, have been tamed. There are no surprises here. Until, one day, when there was.

Near the end of the summer, with our goslings now sleek and sporting their black and brown feathers, the water rained as much in one night as it usually did in 30 nights. We watched as the water rose up to the bank, and as it began to splash onto the grass, we knew we could not stay.

A few looked at me in confusion. "I thought we wouldn't go to the convention for another month or so."

"No time to argue," I said. "The time is now." With strong beats of my wings, I rose into the gray sky. Pelted with water, I honked encouragement to the flock. "We have to find safety," I told them.

Amelia and Seneca knew what to do. They each took a flank, honking at the youngsters, encouraging them to keep going until we could find someplace to roost. The other adults filled in the ranks between the youngsters, and soon we were flying in a clumsy "V."

Below us, as we flew along the creek, we saw its muddied waters spill over both sides, sweeping away the nests that had been there only moments before. Thick tree branches floated by in the wild, rough water.

"This way," I said. For once, I didn't know exactly where to go, but I couldn't let them know that.

I flew, and they followed, Seneca and Amelia honking all the way. "Don't worry," they said. "We'll be resting soon." The youngest geese were tiring, I knew. We had to stop somewhere, but where?

Below us stretched many block houses of two-footers, each with only a small patch of green. Not enough to support a flock. We kept flying, over stone pathways filled with rushing metal boxes, over open fields of prickly dry corn. Nothing looked right.

"I'm tired," Gus called. "I don't think I can fly much further." His parents, Belle and Schuyler, sounded worried as they honked at him to just keep flying a little more.

Then I saw it. A perfect spot. "We're landing there," I told them. Below us was a large rectangle of green, with an oblong lake surrounded by enough trees and brush for us to hide our nests. Relieved, the flock landed. Gus immediately began foraging for food while I spied out possible nesting locations.

The other adults helped, and we'd soon made ourselves a camp.

At first, our new home seemed perfect, but the two-footers who lived nearby had apparently never been trained. Every morning, several of them ran at high speed down the stone pathways, frightening the less fierce among us. I once sat sternly right in the path of one of them, to show my displeasure, and she made a shrieking sound and nearly crashed into me.

"These two-footers are dumber than most," I observed.

Amelia nodded in agreement. "I don't even know if we can train them."

For months, we tried, but one of the problems was that different two-footers kept showing up. For every kind two-footer gosling feeding us bread, there were half a dozen shrieking and running after us just to see us shake a tailfeather.

One of the two-footers even brought a metal flying thing that buzzed by us, swooping at us from every side, even from above. Gus saw the flying thing and ducked under a bush, a most un-gooselike way of behaving. If we stayed here, all my training would go to waste. It was time to leave.

"Stay here with the flock," I told Amelia and Seneca. "I'm going to go take a look at our usual nest site."

Flying back, I passed over green squares and block homes, over gray stone pathways and big black ones. Over loud metal machines, and finally, I glimpsed what I had hoped to see. Our creek, winding through green banks, next to the wild woods.

Descending, I flew triumphantly in a circle over the black rockway and the beautiful, green creek bank, honking to let everyone who could hear me know that the Babysitter was coming home, and that in a day or two, I'd bring the flock with me.

That's right, buddy. The boss is back.

This is fiction but based on my observations of the Canadian geese who live year-round behind our apartment complex.

Here's a video of them crossing our parking lot last summer.

They really did disappear for a few months after a flash flood in late August but came back recently. A couple years ago, after a similar flood and temporary disappearance, I was greeted in the parking lot one morning by seeing a goose flying triumphantly in circles over the parking lot, honking. Within a couple days, they had all returned.

My other entry for this week is a poem about our ever-flooding creek, home to the Babysitter and her flock: Another Flood.