therealljidol). The topic this week is "The Streisand Effect," which refers to the phenomenon where trying to draw attention away from something actually attracts more attention. 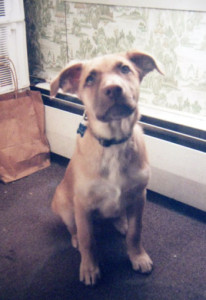 My parenting skills developed before my son had even been conceived, thanks to my late dog, Una. At the time, my silly, affectionate golden-colored pit bull and German Shephard mix with the pinkish nose, my little Boo-Boo, was my furry child. For all I knew at the time, she might have remained my only one, because I adopted her after my first marriage ended and wouldn't upgrade to a second, permanent husband for several years.

Puppy Una, compact ball of fur and energy, loved her brother, Murray, whom my Mom had adopted. Their sister, Emma, went to live with my sister. All of them came from a litter that my brother's dog, Pulsar, birthed while he was still living in Colorado. My sister and I had met the puppies when we went there to celebrate New Year's Eve 2000. We saw the new millennium in while standing around a bonfire in the snow, watching the neighbors' windows in case the Y2K bug crashed all known technology. (It didn't.)

Una's bounciness turned out to be good training for my bouncy boy, who at nearly 10 can get a workout even at the computer. He gets so excited about what he's doing that he'll stand up and bounce up and down on his toes, effectively doing calf raises as he types.

But Una needed an outlet for her exuberance, so I regularly took her to my Mom's house for play dates with her brother, who had inherited his dad's large, square head and Pulsar's dark coloring. Una and Murray had a unique bond, lying on the floor facing each other and talking in puppy language. Their "woo-woos" and playful "grrs" sounded for all the world like a real conversation. You could track them through the house by listening for it.

Now, they were puppies but they weren't fools, and they knew their happy noises drew my attention. At least, that's what I have to believe, because of what happened on the afternoon in question.

I'd been sitting in the front room, working on an article for the local newspaper, where I was a reporter and assistant editor. In those days, I didn't have a laptop, so I was tied to that work space in what used to be our formal living room. Like kids do, the pups were hanging out in the family room, the big room in the back of the house with the comfy couch and the television.

Working on the article, I looked out the window to think. Spring air whooshed through the open sash. Birds tweeted and chirruped. A beautiful, quiet spring afternoon. Too quiet. Knowing immediately that something was wrong, I dashed into the family room to find out what the puppies were doing.

They were eating the couch.

You know in the movies, when the parents go away for the weekend and the kids have a wild party? Then, after the party ends, the camera lingers over the devastation that's been wrought? It was like that. But with couch cushions. Or rather, I should say, with the stuffing that used to be inside the couch cushions.

They'd had a puppy party, all right. There was so much shredded foam lying on the floor, I wondered at first if they'd gotten into a bag of cotton balls. The cushions, spread across the carpet, looked like someone had been playing a game of "the floor is lava" and using them for stepping stones.

When they saw me, the two pups sat up and grinned, satisfied with their work.

Just then -- I am not making this up -- I heard my Mom's car pulling into the driveway. Frantically, I stuffed as much of the foam as I could into the mangled corner of the closest cushion, tossed the more intact pillows on the couch, and tried to think how I would explain this.

Of course, I forgot one important thing. Mom had raised three kids. When she came inside and I confessed that I'd let my attention wonder and allowed the puppies to have a wild couch-eating party, she simply nodded with a bemused smile. "Welcome to parenthood," she said.

In that instant, I realized that all those times that we kids had done something bad and tried to hide it, she must have known. The sheets stuffed in the laundry basket after a nighttime accident; the change I slipped into my pocket after buying her bread at the local corner store; the many Saturday mornings I snuck downstairs to watch cartoons at 6 a.m. She knew. Whether or not she ever confronted me about it, she knew about it all.

You can't hide anything from a Mom.