In this story, I'm the villain. If you'd seen me at the time, you wouldn't have guessed so, unless you picture trouble with wild, curly blonde hair, a crooked smile, and impish blue-gray eyes; a devil in a tie-dye and a silver peace-sign necklace. 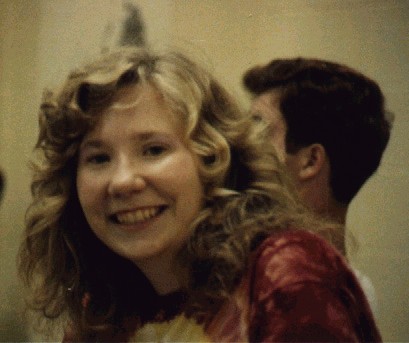 Me in my freshman year, grinning wildly

When I first arrived at Penn State, I immediately joined about a half dozen clubs, only a few of which would retain my membership by the end of the year. In addition to joining the radio station, WPSU, I also tried out for the campus newspaper, "The Daily Collegian."

Yes, I said try out. According to them, so many people wanted to participate in the paper that the editors needed to be selective. No problem, I thought. I took three years of high-school journalism and was the feature-page editor for the school newspaper. I showed up for the writing test, which was a breeze. Confident, I turned it in and then bounced into the basement of Carnegie Building in a couple days to read the results. No way would they turn me down.

Except that they did. And when I was 18, I wasn't used to failure. I'd been a straight-A student, first-chair clarinet in the band, yearbook co-editor, graduated third in my class. Practically anything I'd ever considered trying had worked out for me. And the things that didn't? They weren't really my jam anyway.

I groused about the rejection to one of my friends at the radio station, which was rapidly becoming my favorite place on campus. Even when I wasn't working on a show, I'd hang out in the oversized lobby, chatting with people, doing homework and previewing albums on the turntable with giant, noise-cancelling headphones.

"Did you tell them you worked at WPSU?" the friend asked me. He was a year older, a bespectacled guy with a babyface and the made-for-radio name of Pat Urban. After graduating, he'd become a fixture on a State College radio station. But even then, as a relative neophyte, he spoke with authority.

"There's your problem," he said. "They don't like it when you're involved in anything else that takes a time commitment. Blue Band, radio station, you name it. That's the short route to the rejection pile."

Hearing that, I bristled with righteous teenager fury. Those cads! Those scoundrels! (And yes, I probably thought something very much like that, being besotted in those days with archaic insults, the more British-sounding the better.) How dare they make a snap judgement about me?

You did not turn the 18-year-old Alyce down.

Fired with new purpose, I reviewed the red ink in the margins of my tryout story. "Who? What? Where? When?" I saw scribbled next to my lede. OK, I mused. I guess I made the mistake of trying to draw the reader in with a more creative sentence. Clearly, these fools didn't recognize feature writing when they saw it.

I pored over editions of the newspaper, analyzed the style. Cookie-cutter journalism, I assessed it. Start with a dry lede containing at least three of the five "W's" -- who, what, where, why, when -- and follow it up with an attribution to a source, i.e., "campus police said." Yawn. I could write that in my sleep.

Thus prepared, I showed up again the next time they held tryouts. On the sheet of personal information, I admitted to no other extracurricular activities. Given the data for a sample story, I hammered out cookie-cutter prose so dry it could make your eyeballs wither. Every other sentence, an attribution: "said the fire department," "said so-and-so." Said your mamma.

This time, waiting for the results, I felt smugly complacent. Sure enough, checking the list in Carnegie Hades, I spotted my name where it belonged: in the list of accepted reporters. Ha! Take that, "Daily Collegian"!

Except I didn't really want the job. So now came the uncomfortable part. I requested a meeting with the faculty advisor, whose name I forget. But I remember her dark, curly shoulder-length hair, and the look of consternation on her face when I told her I was going to give up my spot.

"You realize that your dropping out means that somebody else doesn't get in," she scolded.

I nodded contritely, leaving the office with my head bowed, all the while thinking, "Well, it serves you right." Seriously, not my problem they couldn't just call in a runner-up.

For years, that became my party story, about how "The Daily Collegian" rejected me, so I took the test again and, when they told me I was accepted, I turned them down. My friends would laugh uncomfortably and change the subject. Eventually, I dropped it from my repertoire.

I'd like to say I learned my lesson, that I've been haunted for years by the way I squandered someone else's chances. Except that I wasn't. Not right away, not for decades. When I think about it now, I hope that maybe someone on that rejection list became similarly fired up. Not for comeuppance, but for success. Maybe it made them a better writer, perhaps even, eventually, a prize-winning journalist.

And maybe, if I'm completely honest with myself, I didn't belong at "The Daily Collegian" after all. Not in the straight news department, anyway. The freewheeling radio station, where I got to spread my wings, explore ideas, dabble in broadcast news, as well as in script writing and comedy, was destined to become my college home.

But deep down, I secretly feel like, with their rigid policies, "The Collegian" had it coming.

I told you, I'm the villain of this story. 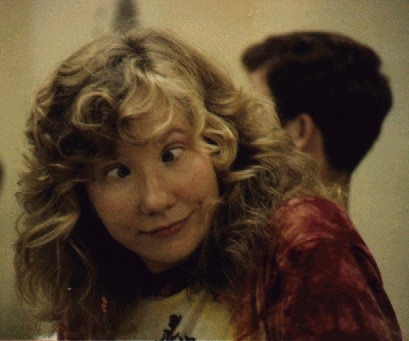 Me with crossed eyes in my freshman year