My poem for NaPoWriMo today again comes from the prompt I posted on Wild Violet yesterday: Literary Inspiration. I used the random sort function at Project Gutenberg and chose the a science-fiction book from 1961. After reading the opening pages, about an astronaut meeting a strange-looking alien and immediately befriending him, I chose to write from the alien's perspective. 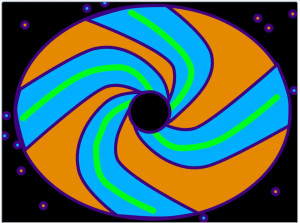 With odd, oval eyes, the yellow-orange being
froze. Hand on a crystal tube, it watched
the white-suited stranger, whose round head
peered through a glass bowl. How strange,
Ulkay thought. The fishbowl man slipped
a metal weapon into a pocket, held up
oversized hands in greeting. Ulkay grinned,
and the stranger did something resembling
a smile, with his puffy pink mouth.
They clumsily clasped appendages.
Ulkay had met his first alien.