NaPoWriMo 22: We Are Hugh

My poem today is a poem in praise of a friend whom I knew through Philcon. Sadly, he passed away early yesterday after a long battle with both cancer and, more recently, a stroke. He knew so many people, but he didn't just know their names. He remembered things about you, and actually cared. I'll never forget how he showed up for a poetry reading I did about a decade ago, one of only two friends who did so, and it meant so much for me to see some friendly faces in the audience. The last time I saw him was at Philcon 2019, passing through to get our badges. Even with everything he'd been battling, he was as cheerful and helpful as ever, always going the extra mile to make everyone around him feel important. 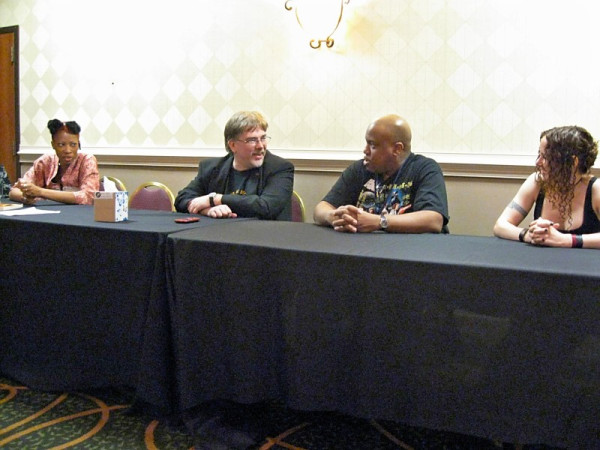 Hugh (second from left) at a panel at Philcon 2010

We Are Hugh
(in memory of Hugh Casey)

In the pull of his orbit, unlikely bodies
revolved in loose ellipse. Celestial sea
that we were, lucky to cross
his sharp eye, to be drawn in
for a laugh, a conversation. Or,
in better days, a hug. That light,
that voice, a safe mooring spot
despite a world that cast
so many of us out. His power --
to see you through all the posing.
To show up for you
when you least
expected it. To make the day
better, just by passing through it.

To some, good Sir, to others
friend, or helper, or just
that friendly face. A glue
holding the universe together.
Keep saying it, over and over.
We are Hugh, and better for it.