therealljidol), where the topic is "Hiraeth," which is a Welsh word that means homesickness, yearning, and longing, or "a longing to be where your spirit lives." 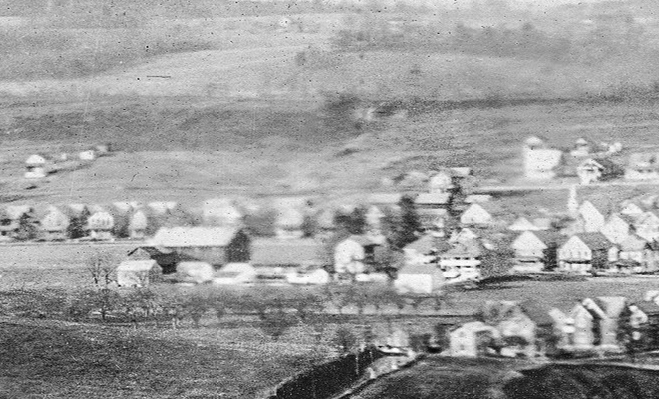 West Milton in 1919. A somewhat blurry collection of little white houses
with some larger boarding houses in the foreground. In approximately the center of the photo
is a blurry indentation where my house would later stand.

Recently, I came across a panoramic photograph of my hometown in 1919 (Milton, Pennsylvania, panoramic view, 1919). With trembling hands, I used the controls to sweep west, across the Susquehanna River, to the little village where I grew up, West Milton. Spotting the simple slanted roof and modest steeple of the church I attended, St. Paul's U.C.C., my eyes swept up the little road we used to walk down every Sunday, and then westward along Highland Avenue to the middle of the street.

My childhood home did not yet exist. I saw merely a slightly blurry indent of fields. Nor did the homes that flanked us on either side, that filled up a full street of evenly-spaced little bungalows.

No hint, either, of the trees we called "the woods," which were really a sort of large fencerow between the homes and the fields beyond. The woods we explored, memorized on internal maps to find the most fascinating locations, like the little creek where we tried to fish with corn on a stick, or the abandoned 1930s car in an indentation, pockmarked with bullet holes that gave us a frisson when we played nearby.

None of it (except presumably the creek) yet existed. And for some reason, I exhaled.

To wind backwards, past the freshly-renovated house I visit in dreams (though even there, I'm aware our family no longer owns it). Back through the muddled despair as my siblings and I struggled to weed out the clutter we'd suddenly inherited from our mother. Back through the time we stopped visiting, when her dog began to frighten us with his sudden attacks at the door as anyone arrived.

Further back, to chats on the porch swing, her taking me to my old bedroom, now her art studio, to show me her most recent works. The dismal days I stayed on her pullout couch, after my first marriage broke up, sneaking drinks of Jaegermeister I kept next to the stereo in the built-in cabinet, and listening to a John Lennon album each night, just to get to sleep.

Then further, to the three weeks my first husband and I stayed in my childhood room, after a misguided vision quest for the first month of our marriage. And then, a short time after, after we'd moved out, to the weekly meals at her house, where she always welcomed us, whether expecting us or not.

Back to college and grad school, when I no longer lived there but still used it as a home address. Mom would pile up mail on the wooden mantlepiece for me, mostly things I didn't care about, anyway. How odd it felt, cramping myself into my old room with the double canopy bed, too big for the space, the white glossy dressers with a painted rose pattern; the matching kid-sized desk. My father still can't understand why I didn't take all that furniture after her death. I merely have one dresser, which I'd claimed years ago and taken from place to place for more than a decade.

I tried to tell him, I don't have space for it all. Only for what really matters: the family photographs, the tubs full of her artwork, things like that.

I don't have space for the old box fan that sat in my bedroom window on summer nights, because my part of the house had no air conditioning. I'd wake up in the wee hours to turn it off when it grew too cold. I could hear the far-off train, passing through with a mournful cry that, to me, was comforting.

The dreams I had, looking through those lacy pink-trimmed white curtains, over the rolling foothills to the south (now festooned with oversized McMansions). I have room for those memories, but not everything. Not for those curtains, even if they were still in good condition.

To keep every item that held a memory in that house, I'd have to rent out several storage spaces. To fill them with bicycles, ridden successively at different ages, still stored in the garage. Or even my most painful denial: the upright grand Leonard & Co. piano, made in 1881, rescued by my grandfather from a curbside trash pickup. But now, after years of neglect (and cats), it was no longer worth saving. I can only hold onto the memory of all the nights I played that piano, after dinner, alone in the dining room with the stained glass chandelier, the china cupboard full of glassware, and the family Bible (which I did keep).

I want to unburden myself of guilt. To slip backwards even further, to my childhood playing Barbie dolls with my friend on the gold velvet loveseats in our more formal "living room," to be differentiated from the "family room" in the back of the house, with the giant cabinet TV and the wall lined with inset shelves, crammed full of books.

Backwards, to afternoons spent with my brother in that family room, using wooden blocks to create the outlines of a neighborhood on top of the heavy dark wood coffee table, where we'd place Fisher Price plastic furniture and play out stories with Fisher Price people.

My little sister, my favorite toy at the time, a red-faced bundle in a faded green pram that might have been an antique. I remember worrying that Mom would accidentally let go of her on our walks down our quiet street, and she'd go bouncing down the steep hill to the more trafficked streets below. I think I even asked her what would happen if she did so.

Or back even further, to my parents showing us the house, trying to interest us in it. I was initially unimpressed. "It doesn't have a stage," I told them, referring to the landing that connected the front rooms with the living room in our apartment above my Dad's medical office. On that wide, flat stage, I would perform to a captive audience of parents or their friends who'd come to visit.

My dad showed me the landing at the bottom of the steps, but it was much too small, with no seating area. Then he showed me my room, upstairs. It had violet walls, with an accent wall in a purple and white floral wallpaper that I adored. Immediately, I wanted to move, announcing that would be my room. (It had no heat, either, so I had to keep my door open in winter so that heat from my brother's radiator would come through the door.) My room became the only room my parents did not redecorate, because I would not give up my purple walls.

You could go back further, to the time when the previous family lived there, the Youngs. Back to the time when their three boys pressed their palm prints into the fresh cement on the sidewalk next to the porch, carving their names with a stick. My brother and I used to press our hands against those hand prints: at first, much bigger, then eventually, ridiculously small.

Or back even more, to the previous owner, an old woman by the time she passed away, I believe in what would become my brother's room. (At night, sometimes, he felt a presence. I never liked being in there in the dark. He would sleep with his blanket over his head, a form of protection.)

Was she the woman who called to me once, from the upstairs hallway in the middle of a bright afternoon? Just my name, spoken once, as if trying to get my attention. The voice sounded like a young woman. How long did she live there? Or did the voice, instead, pass through a seam in time, from when my sister called me from down the hall, as we both worked to salvage what we felt was most important? Or from some other, forgotten time? Or from myself, traveling back in memory to burst through reality with my own name?

Back, much further than that. Past the time when the simple wood-frame house was built, sometime in the 1920s. To a family perhaps standing on that little indent of land, making plans. Imagining it all, taking form inside their brains.

That blank slate, a green, blurry place of potential.