therealljidol, which is an open topic. I had no idea this morning what I wanted to write about, and then the idea found me. 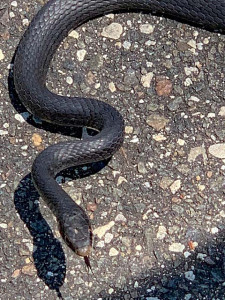 Sometimes you find the snake, and sometimes the snake finds you. Groggy, the gray day compounding my morning disillusions, I aimlessly scroll through my social media feed when, bam! A brutal S-curve fangs a grin at me from a friend's feed. My friend spotted the harmless Black Racer snake scrawling across her sidewalk, so she snapped its picture and skedaddled. Most people probably wince and keep scrolling, but in my poor brain, the snake stays.

A figurative snake. A memory snake. Snuggled in my brain crevices for 23 years, only to swirl back up with a moment I'd rather not write about. But sometimes, as I said, the snake finds you.

On a sweltering summer afternoon in the late '90s, my ex-husband and I have driven to a little shop along the Susquehanna River, near Harrisburg. I've parked in the empty gravel parking lot, which should have been an indication the specialty food store (Book store? New Age art shop?) is closed.

This rarely happens, even in dreams, but I see myself from outside my body, my hair long and wavy with frizzled split ends, wearing the faded burgundy peasant shirt with the loose elastic wrists from continually pushing it up to the elbows, a breezy drawstring skirt and Teva sandals on my dusty feet, walking across the lot.

As the figure that is me returns to my red Ford Ranger pick-up with the white cap, christened Red Arrow, my husband crouches down to look at something in the gravel. Skinny and tall, his dark hair hanging down past his shoulders, he is wearing the threadbare purple madras shorts I gave him when they no longer fit me, and some sort of an oversized white T-shirt (they always hung from his shoulders to billow like a flag over his impossibly petite waist).

"What are you doing?" I ask, knowing better. Too often, his actions make no sense to me. Compulsions, I believe. A spiritual sort of OCD, which more and more often has become disruptive.

I finally focus on the shape in front of him: a pure black snake. No expert, I have no idea what kind it is, only that it's not a rattlesnake, the most common venous snake in Pennsylvania, which any hiker or nature lover should be able to identify. I'm also certain it's not the second most common venomous snake, a copperhead, which I saw once, beheaded by a shovel by a friend's father.

"Back away and it will go its own way," I tell him, repeating the advice given to me by my father about the harmless garter snakes that would sometimes surprise us by darting across the sleepy country road on which I grew up.

In the middle of a muggy Susquehanna summer, my blood chills. "No," I tell him. "We can't."

He gestures to the empty truck bed, which we had slept in, with way too much gear, while traveling up the Mississippi after marrying, just a few months ago. But now, it is like a giant, red empty box. All our gear has been offloaded into the odd second-floor apartment with the sinewy hall that we rented near my hometown when I insisted in getting off the road before we ran out of money. I've taken a job as a pizza delivery driver, quick money while I look for something better.

The truck bed is empty, yes, but not a snake crate. I imagine him scooping the snake up, the animal flailing in fear, perhaps lashing out. And if not, slithering in a panic, all over the bumpy black rubber mat, as we drive back home. Then what? How do you get a terrified snake out of a giant empty metal box without one of you getting hurt?

"Absolutely not," I tell him. By this point in our relationship, I've accepted a lot. His nightly compulsion to sing a song outside about our love: endearing at first, but now inconvenient, to say the least. The way he has to retrace his steps to wherever he had a bad thought, to exorcise it. The food offerings, laid beneath trees, even when we were on the road and only had a small meal to share. Other offerings: the silver forks my grandfather gave me, diminishing in the drawer as I keep finding them outside, gifts to the nature gods.

My disassociation wants to cloud this memory over, pull me back from the moment. That excruciating neverland, our mental battle. He pleads with me, as if he knows that the snake is his spiritual savior, as if it can cure him. So certain. Me, I only know that I will not consent to making bad outcomes possible.

I climb into the driver's side, and the slamming door makes the snake skittle away as my husband wails. Futilely, he chases it, but it escapes into the long grass. Finally, he climbs dejectedly into Red Arrow, and we drive home.

Between us, a chill so palpable I feel goosebumps. It will not be the last, or most dramatic, such battle, but it is the moment both of us know how our marriage will end. At least I saved the snake.