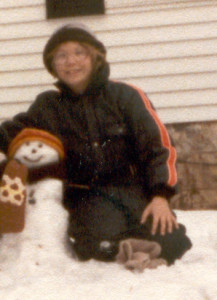 Me with a much smaller snowman at about age 10

When my brother and I were about the age my son is now, we vowed to build the biggest snowman ever. Surrounded by perfect packing snow -- wet and dense -- we took turns rolling a ball of snow around the hilly empty lot next to our house, once surveyed as a road but never paved, and now the perfect sledding place for us and the other neighborhood kids.

The ball grew larger and larger until, in one spot, we hit grass, and a few blades clung to our snow boulder, which came up to my brother's chest. He selected a place to roll it, safely over our property line, behind one of the bushes, where it would be protected from sleds and sleighs of all varieties -- plastic, wooden and those impossible-to-steer plastic disks.

Next came the middle section, and we put our tired arms back to work. This portion, we knew, should be a bit smaller than the bottom, but still huge. As we worked, our mittens grew wet and chilled. We had to move to a new location on the hill, where we hadn't decimated the snow.

Our middle section, completed, came up to my brother's waist and, to our chagrin, was too heavy to lift. Not to be deterred, my brother knocked on the next-door neighbor's brick-red door until the teenage son answered and agreed, reluctantly, to lift the icy rock onto its base.

Not the most athletic of guys, our neighbor grunted and cussed under his breath as he lifted the ice ball. Struggling to lift it high enough, he didn't want his effort wasted, so he commanded us to be ready with handfuls of snow to pack into place where the two balls met, and hold them tight. Eagerly, we did so, and as he slid the ball onto its place, holding it still with some effort, we made with the frozen mortar, fixing the middle section in place.

Pleased with the results, we asked our neighbor to stick around until we finished a head. Rapidly rubbing his gloveless hands together, he told us, "Not today, guys. I've got to get inside."

Disappointed, we nevertheless had to admit we wanted to go inside, as well. Golden afternoon light had turned to bluing twilight, and we were cold and exhausted. We left our naked, near-compete colossus and pulled open the front door, to shed our snow-covered boots, gloves and hats in the front hallway.

Our momentum broken, the project lay fallow. A day later, we stood studying it and agreed that, even without a head, it was still our biggest ever snow creation. But since it didn't really resemble a snowman, more of a bumpy solid column, we didn't bother to affix the traditional rock buttons, stick arms, carrot nose, and scarf.

My brother, whose idea the snow giant had been, was the first to discern its new use. Using the snow halfling's waist as a foothold, you could heave yourself up on top of the creation and sit on its empty neck. He flattened and compacted the snow up there to make a better seat. The view, he told me, was amazing.

I was skeptical until I climbed up myself. Turning my gaze downhill, I could see past our house's white siding, the neighbor's mint-green trailer across the street, and downhill all the way to the state highway at the bottom, the white fields beyond, and the rising slopes of Kling's Hill, the biggest sledding challenge in our neighborhood. Covered with a fringe of leafless trees, Kling's Hill looked like a wintry oasis, with little black dots climbing up and whooshing back down.

After a few minutes, my brother demanded another turn, so I climbed down.

Always a fan of quiet spaces, that winter I often sought the respite of our snowy throne, to sit and contemplate our neighborhood in a way I never had before, from lofty adult heights.

The half-built snowman lasted longer than the snow on the surrounding slope, acquiring a grimy translucency, both from our feet and from the melting process that condensed it further and further. We continued to climb it as long as it lasted, finally stepping onto it like a stool as its height shrunk with warmer days.

Considerate makers, we let it slough naturally into the hillside, respecting it even as a grayed lump, though lesser children would have stomped it flat. By the time sleds had given way to bicycles, the snow throne had returned into the spongy earth, where wild violets grew.

Existing in a pre-Instagram childhood, we never photographed our creation. If our parents noticed the ice sculpture, they didn't say. Our snow throne, born of imagination, therefore still exists. Sometimes, I send my mind there, to cool off, in wordless peace, to hear the wind shuffle through pine trees, the far-away traffic, the chuckling of winter-brave birds.