You always knew what role I would play in our family's history. Finally, I'm doing what you asked me to do, so long ago in the nursing home. "Maybe you could write about our family," you'd said. I'd shrugged with the indifference of youth. Though it took me decades to get to this point, you always trusted I would become our griot, our troubadour-historian, turning your genealogical notes, documents and scribblings into a tangible narrative. As I relax in this overstuffed, ivory chair, surrounded by shelves of carefully-curated porcelain cups and glassware, I wait for you to arrive, again, the way you used to.

For years after you died, Grandma Heritage, I visited your dream apartment often. We would sip tea from fragile cups, as I updated you on on our family. Dad is doing well, I'd reassure you, and you would exhale with relief. But then again, you should have known that he would, after you spent so many years teaching him how to function in the world. You understood his strengths and weaknesses: how well he grasped the factual world and how poorly he fathomed emotions. I can see how much you taught him, by rote, in those days before the spectrum was anything besides the term for a rainbow.

So much has become clearer to me, these thirty years. I finally understand why you always deferred when I asked how much you'd found about the Wilson line. At the Virginia Scottish Games, when I asked you which tartan was our family's, you pointed me towards the Buchanan tartan's bright interlocking lines of yellow, red, green and blue; not to the orange, green and blue Wilson pattern. At the time, I thought the Wilsons didn't have a tartan of their own.

I understand now why Dad always cautioned me that if I met anyone named Wilson, there was a high probability I was not related to them. Here, I just thought he said that because Wilson was a common surname.

Do you know that Dad didn't tell me about his father's true paternity until my Mom died six years ago? It's true. Mom never knew, writing "William Stuart Wilson" on my baby book's truncated family tree, in her loopy, beautiful handwriting.

I didn't know until that Thanksgiving, the first without Mom, when Dad delivered the news, all of us a glass or two into the holiday wine. "Technically," he said, "we're not actually Wilsons."

"Oh?" I responded, with an eyebrow raise, imagining he was going to tell us the name had been changed in primitive days from something more Gaelic.

"No, we're Eutslers," he said simply.

You can imagine, Grandma, how surprised my siblings and I were. Of course, you wouldn't be surprised at all, because you were the one who'd told Dad the truth.

Dad relayed the story of how he'd been tasked with a family history project in college, and how he'd wanted to talk about his father's family. That's when you set him straight, told him about the impossibility of him carrying any Wilson blood, his father having been born three years after his nominal father, William S. Wilson, had died.

No, Dad told us, his father's actual father had been a logger named Eutsler, who went on to run a mill in Grottoes, Virginia, where my grandfather grew up. This mysterious Eutsler had offered to marry my great-grandmother, but she had declined, saying she was "not worthy."

My brother, full of Thanksgiving mirth and the sort of ironic good humor that arises when you find out juicy family dirt, quipped, "Maybe she just didn't want to be a Eutsler."

Meantime, I nodded sagely, full of wine and myself. "A distinctive surname in a very small town, with a specific profession? I can find him," I mused.

By now, you know, Grandma, that I did. As our family historian, I know you must have found ways to network in the afterlife, as well, and keep tabs on all of us. You know that I've identified the logger as George W. Eutsler, co-founder of Eutsler Brothers, who never married and died of liver disease shortly before my grandfather, John Omer Wilson, moved away from town, to Washington, D.C. That was where my grandfather met you, fell in love with you, married you, and, at some point, told you his story.

For more than a year, I thought that I'd done something you couldn't have done, having only found one folder of yours labeled "Eutsler," which contained a page from a 1940s Grottoes phone directory, the Eutslers all circled, as well as a few cribbed notes from census records. I patted myself on the back for my research skills, my ability to use modern methods, including DNA, to narrow down the possibilities and arrive with near 100 percent certainty at my conclusion.

And then, this past February, my Dad gave me a manila envelope he'd discovered amongst your papers. Somehow, it had escaped being placed in the large box of your genealogical materials I'd already taken home with me, in the years since Mom died, to assist with my family research.

Inside that envelope was a photograph of George's uncle, along with a copy of a deed George himself signed when he left the Eutsler Brothers business to his brother. On a sheet of familiar-looking yellow legal paper, you had summed it all up in pencil, with a tiny little chart, so much smaller than the others you'd developed but one of the most important. "George W. Eutsler" at the top, with a line leading downwards to his only descendant, "John O. Wilson."

Oh, Grandma, I've been waiting patiently for you. I've wanted so much to talk to you, to sip tea like we used to, amongst your bird-covered teacups. Around us, pristine shelves of delicate china bells (now gathering dust in Dad's living room). I got your notes, all of them. I'm following through on your unfinished business, checking out the question marks you left in your charts. As you long ago predicted, I'm carrying on your work: making sense of what you've left behind, putting all these stories into words, even the connections long unspoken.

Grandma Heritage is my paternal grandmother, Miriam Marshall Wilson Heritage. Her very appropriate surname came from marrying my step-grandfather, David Heritage, when I was a very little girl.

Our connection to the Buchanan line came from my great-grandmother, Fannie V. (Weaver) Wilson, who was John O. Wilson's mother. Fannie's mother was a Buchanan. 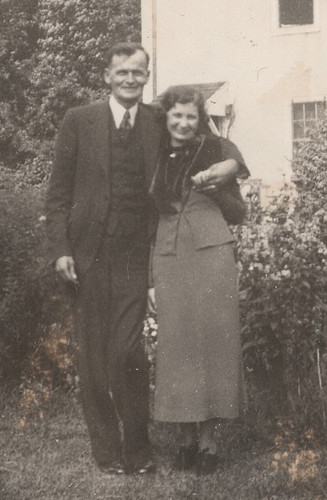 My grandfather and grandmother on their honeymoon in 1935 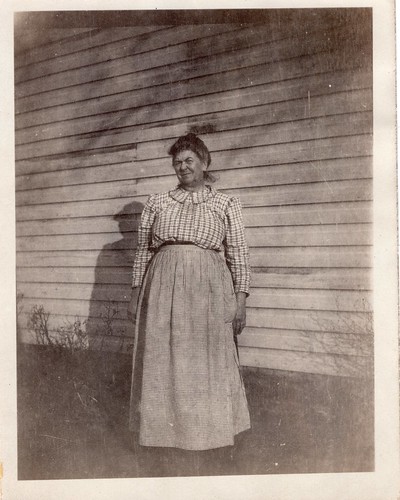 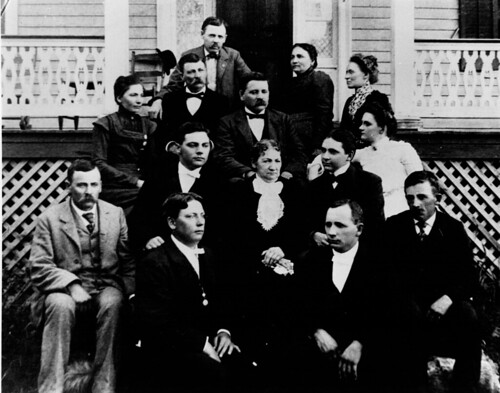 Family photo of George Washington Eutsler's children, with mother Sarah (Byerly) Eutsler in the center. Eugene is to her left, but the other siblings, including George W. Eutsler, are not identified in this photo obtained from a Eutsler cousin.