This is my entry for LJ Idol Survivor,. This week's topic is "Touchy Subjects."

In my hometown, you learn what not to say, especially when you're a chubby, glasses-wearing girl geek. I had enough going against me. No need to voice an unpopular opinion; make myself a more prominent target.

So I stayed quiet when I was the only one who voted for Jimmy Carter over Ronald Reagan in the mock presidential election. On the playground, they took their aggression out on the class scapegoat instead: the small kid with out-of-date clothes. I knew I should speak out, or tell a teacher, but I was afraid they'd turn on me next.

I stayed quiet when I witnessed behavior I knew would make my Sunday School teacher frown. I should have ratted out the bullies, but I worried. I should have spoken up when people told off-color jokes with racial slurs, or homosexual insults, for punchlines. Instead, I stopped hanging around such people. I walked away from the haters before "cancel culture" had been invented.

Even being quiet didn't always work. Some perceived my silence as arrogance. If I stuck my nose in a book between classes, it must be because I looked down on everyone. But that's not true. In those days, like any kid, even from behind an Emily Dickinson book, I wanted to belong. One day in junior high school, I learned that would not be my destiny.

In the mid-Eighties, when Day-Glo colors reigned, I talked my mom into buying me a bright orange sweatshirt, which I paired with electric blue faux parachute pants, in a cotton material with zippers on the thighs.

All day long, my classmates let me know how ridiculous they thought I looked, though my outfit was tame compared to the eye-bruising color combinations routinely seen in our halls. That's when I realized I'd never fit in by trying to do what was popular. So, I figured, I might as well be myself.

When most of the other girls went with big hairstyles, I asked my hair stylist to give me the shortest look possible, then had him add a "tail" in the back. (For those born after 1985, that was a hunk of hair that hung down lower than the rest of the haircut and was typically worn in a little braid. Honest, it was kind of a trend.) My favorite shirt was a mint-green one-sleeved top that looked exactly like a normal shirt with one sleeve removed. I loved how wrong it was.

In high school, I wore a man's knit fedora all winter long, Boy George style, and practically wore out a blue flannel shirt long before the grunge movement made flannel cool. I wore a giant silver peace sign necklace, the heavy weight of it making me feel grounded, so often that when I graduated, the "Remember when" page included the snarky remark, "Alice Wilson's peace movement." (They managed to hide it from me, even though I was yearbook co-editor.)

Fashion became my superficial shield: a distraction from the differences that mattered. In those days, I didn't always speak up when I should. I didn't call out prejudices, or defend the weak. I did, however, try to be kind. And when the class scapegoat, hiding behind his own shield of long bangs, discovered Prince's music, I talked to him before class about our favorite songs. I raved over the artwork he produced for his art electives, and I took proud photos of him for the school paper.

At the newspaper, I finally found a niche. Our phenomenal high school journalism teacher taught us more than how to write articles and design pages. She taught us how to use our voices, and how to listen to the voices of others. I'd write my questions, steel my nerve, and approach the people who had cowed me for years. Through telling their stories, I learned more about them. I learned who they wanted to be, how they wanted to be seen. And I helped convey that to the rest of the school.

Turns out we all have insecurities. For many of us, it's taken years to admit to things we'd never have confessed in school, from who we love to what we believe. I'm proud to say that the people I shyly approached back then, so many of them, have turned out to be greater and braver than I ever could have imagined.

One of them, our class president, spoke out during the 2020 presidential election. As former chairman of the county Republican Party, he spoke out in several newspaper editorials as well as on local talk radio, urging his fellow Republicans to take a stand against the unprincipled, dangerous, autocratic-leaning incumbent president. That could not have been easy. Among his supporters: my beloved journalism teacher, along with two of my fellow high school newspaper alumni.

The artist formerly known as the class scapegoat has publicly expressed support for his gay son, not long after his son revealed his truth. I told him how wonderful that was of him to do, since my own mother struggled with being out in an area that, while there is a strong gay community, also harbors a lot of small-mindedness.

Another classmate speaks out forcefully against racial injustice and corruption, going toe-to-toe with her own family members when they try to trot out conspiracy theories or rave against mask wearing to prevent COVID-19. I cheer her on, even if I still choose my battles and walk away from those who are hopelessly brainwashed.

Who would have thought, all those years ago, that my thoughts were not so different from many of my classmates? Imagine what would happen if we all spoke up? 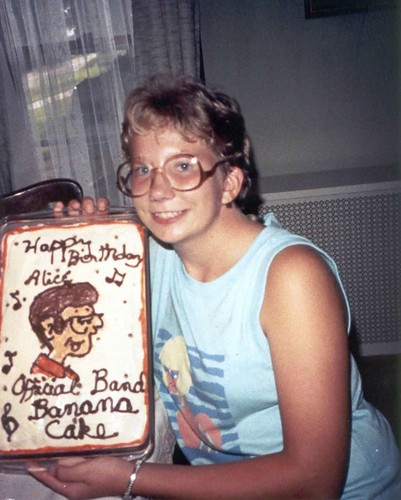 Me in the one-sleeved shirt; sadly the one sleeve is hidden by the cake 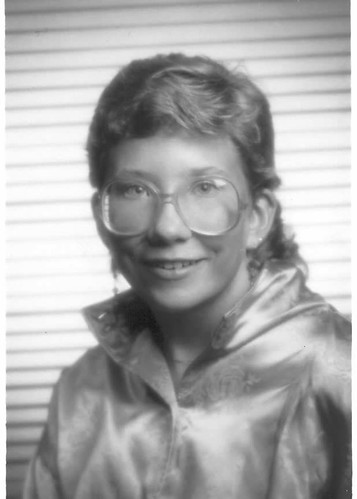