This is my entry for

therealljidol. This week is an open topic, so I chose to write about something I've been thinking about a lot, ever since publishing a piece by actor Raymond J. Barry in Wild Violet where he mentioned his mother was also gay.

Wait a minute. Did she just say
my son looked gay? In his Navy blue
pea coat, his red and black tassled hat.
His chosen winter get-up at age 5.

An elderly acquaintance observed, If I'd
put that on my sons, they would have told me,
'That looks gay, Mom.' Stunned, I wonder:
Should I mention that my Mom
was gay? I just answered, They shouldn't
talk like that. Marked her down
in my book of who not to trust.

My mom, the artist, the gardener, was deliberately
nondescript. Blending into small-town
life, with the female "friend," who just happened
to live with her. Living like
a fugitive, hiding in plain sight.

In the 1960s, she'd wanted a family, impossible
for a single woman, let alone
a lesbian. She chose the simplest answer:
to pair up with her cheerful fellow clarinetist
that she did love, for a time, if her own
hand-written diary entries can be believed.
My dad: optimistic, gentle and supportive.
She didn't lie to him. He just thought
he could change her.

As a kid, I demanded traditional holidays.
Carols and hot chocolate at Christmas.
Santa, cookies and milk. Trying
to fill a gap I couldn't articulate. Hoping
if we behaved like a storybook, the pieces
would fall into place.

When I was in high school and my parents
separated, I felt strange relief. Tension
evaporated, my parents becoming
friends, as perhaps predestined.

I remembered Mom telling me about Uncle Harry.
He'd been gay but married her mother's sister anyway.
She'd always taken glee in this story. Always
seemed sneaky to me. Fine for Harry,
but what about his wife?

My siblings and I took note of a new friend
who acted furtive around us. Took off
suddenly when I came downstairs for water
and an aspirin, to find them sitting in the dark.

One bright autumn day, Mom and I
zipped down country roads in her hatchback.
I have something to tell you, she said,
eyes welling with tears. Her face flushed red.
I'm gay, she near whispered.

It's all right, Mom. I've known for years. And your daughter
wears Army boots, I said, propping my feet on the dashboard,
clad in Vietnam issue swamp boots. This scene
became one of her favorite stories.

Raised in a world where shame and scandal
followed truth, my Mom did what she could
to secure the life she wanted. We kids,
her enduring loves. Not exactly her fault
her rescuer kept hoping the maiden would
finally fall for him.

Happily ever after can be
complicated. No black-and-white endings
in a full-color world. 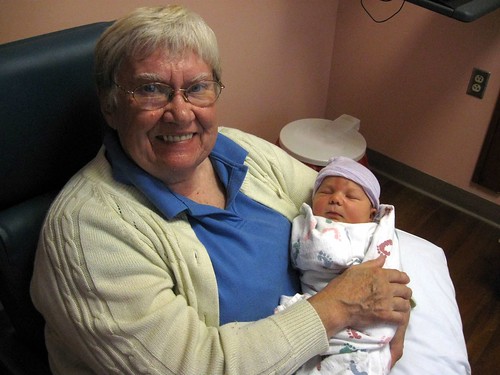 My mother, Vivian Starr, holds my son soon after his birth.