This is an entry for LJ Idol Minor Plus. This week's topic is "Thanks for Giving," and you can read the other entries here: https://therealljidol.dreamwidth.org/1108602.html. I've had a rather busy week, so instead of writing something new, I'm going to share a previously unpublished piece from 2013. 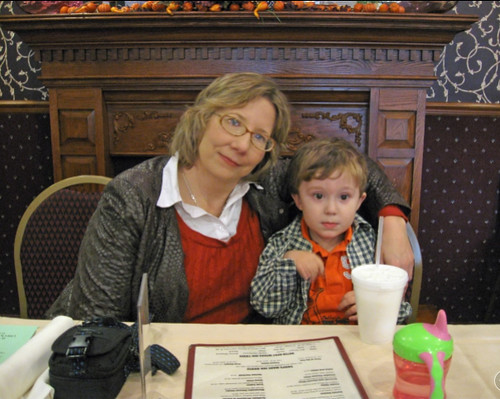 Me and KFP at Thanksgiving dinner in 2013.
(I'm wearing an orange V-neck sweater with white blouse
and brown faux leather jacket. He's a plump-faced little dude
in an orange polo with a blue and white checked button-down long-sleeved shirt
as an extra layer. I've got my arm comfortingly around him and am inclining
my head down towards his little dark-blonde head.)

My attitude towards possessions has changed drastically since becoming a mom. In the three years since giving birth to my son, I've lost an iPod, two voice recorders, and my wallet. I've even had dreams about misplacing my car, but so far that, mercifully, hasn't happened. I suspect that's largely because my son tends to be inside. After all, my increasingly feeble mind still manages to remember him, if nothing else.

Ask any mom: if faced with the choice of dropping her squirming baby and dropping her phone, she'll let the phone hit pavement. (At this point, I'd like to nudge all parents-to-be to invest in an extremely durable phone case; you'll need it.)

While I was never terribly materialistic -- during my extended "hippie" phase, I didn't even own a television -- these days, absolutely nothing matters as much as my little boy. I rarely buy books or CDs anymore, unless they feature dinosaurs and trains. I'm embarrassingly overdue to go bra shopping, and my shorts are falling off, now that I'm finally losing my baby weight. Still, about 99% of my clothing purchases over the past several years have been for my son.

Of course, he's changed in size more rapidly than I have; until this past January, I was stuck in my postpartum squishy state. Admittedly, it's also more fun buying clothes featuring cool cartoon characters than trying to figure out what works on my new, "improved" body.

As a work-at-home mom, my contribution to the family finances has decreased rather than grown. Now that we have three people to feed, clothe and keep happy, I'm fine giving my son the majority of new (or slightly used) things. I feel like I owe it to him, since he's new here.

Of course, if advertisers had their way, I'd be spending far more. The minute you get pregnant in the U.S., you start receiving messages -- both subtle and overt -- about all the things you must acquire in order to make sure your baby is happy and safe. Sign up for one parenting or pre-natal site, and your inbox is flooded with advertisements for the latest baby gear: from necessary items like onesies and car seats to frivolous ones like video baby monitors and motion-sensitive crib mobiles. When you sign up for a baby registry, you guarantee not only that your friends and family will know exactly what you'd like to receive but also that the store knows exactly which items you'd most like to receive coupons and promotions about, and which related items you might be talked into purchasing, alongside them.

Not that there's anything wrong with that: I mean, unless you're planning on hand-knitting all your child's clothing, toys and bedding, you're probably going to want to buy a few new items. Don't let me talk you out of that. In fact, just the opposite: indulge on a few really cute items you can't resist; but don't forget that your little bundle of love will only be able to wear that adorable outfit for a couple months. Then follow my brother's sage advice: take a picture of your kid wearing your favorite outfits, because they'll outgrow them faster than a sports car zips through a one-light town.

This is why so many kids' wardrobes consist primarily of classic staple items bought from the local used clothing store -- T-shirts, sweaters, exercise pants for boys, leggings and cotton skirts for girls -- and a handful of current clothes, provided by giddy grandparents and other family members.

The same goes for books. If your family is composed of book lovers, as mine is, you can look forward to receiving a library full of beautiful children's books. A helpful note: any books you want to keep in good condition should be placed on an upper shelf, because the rest of them will soon be gummed, chewed, torn and ripped. Experienced parents know to keep a roll of clear packaging tape handy in order to "fix" beloved books. While I'll admit that, as a book lover, it used to bother me to see my son wreak such havoc on his books, I now have an easy way to gauge how much he loves a certain story: by how much I've had to tape it back together.

Before I became a parent, I remember visiting friend's houses both before and after the advent of children. While none of my friends ever lived in houses worthy of "Architectural Digest," I noticed a similar trend with all those who had kids. The rustic farmhouse of one family went from quaint to quixotic, while the modern ranch home of another couple went from understated to cluttered. Rugs darkened, walls acquired smudges, and toys took over. In one case, a father of three rummaged through a pile of children's things to dig out his guitar case. And then, this longtime musician -- who's been in more bands than I've worn clothing sizes -- placed the acoustic guitar flat on the floor for my toddler son to investigate. I wonder if he'd ever have considered being so laissez-faire about his instrument when we met in grad school?

And right there is the marvelous revelation brought by parenthood: material things don't matter. They're fun, yes, and some of them are even necessary. But books are made to be loved, clothes are made to be outgrown (or in my case, hopefully, shrunk out of), and toys and games are made to be used. Children seem to sense, instinctively, what so many of us have forgotten: memories come from living, not from hanging back. And when he moves away some day, ready for his own life, I won't think about how much we spent on his clothes and other items. I won't mourn a broken toy truck or lament a torn book. No, I'll reflect on all the memories we formed together. Enthusiastically, fearlessly, with joy in our hearts.