On Fridays I often share some found items, usually notes or other materials I find while walking my dog, Una. I've actually got a folder full of them, which I pull out when needed.

Today, for the sake of time, I'll share just one found item, a note I found this week. It appears to be a communication between coworkers, written in red marker.


It reads, "Saturday was your Monday, no one showed up Saturday? No work today for every one. Wednesday will be the next day of work if you don't show up Wednesday I'll under stand. But no Wednesday menes no work for the week. I'm sleeping in. Do not bother me B." 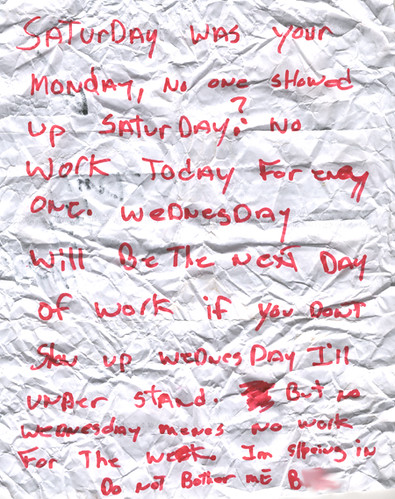 I reread it a couple times, and it makes a fractured sort of sense. I'm guessing these were contractors, since I found it crumpled up near a house where lot of work has been taking place. I'm guessing whoever left it was something of a foreman, grousing about his coworkers not showing up for work on Saturday, although it seems like he himself doesn't have much of a work ethic ("I'm sleeping in. Do not bother me.") No wonder I found it crumpled up.

"He doesn't even know what day it is," I can hear his coworkers muttering.

It was written on the back of a notice of cancellation sent by an insurance company, saying that the note-sender's insurance policy would be canceled due to late payment. I guess it's the only paper he had available for the note, but it's a poor choice, since it contains his full address and policy number.

Someone has drawn an arrow in black marker, pointing to the date on which the policy was supposed to expire, writing beneath, "Don't let it lapse." The handwriting is different than that on the other side, so I'm guessing it was a business partner.

Don't bother B. about it, though. He's sleeping in.

Moral:
Clueless bosses can be found in every profession.