Let me just start out by saying my husband, The Gryphon, was right. I didn't believe you could freeze wedding cake for a year and, upon defrosting it, taste cake as delicious as on your wedding day. He believed, and he was right. 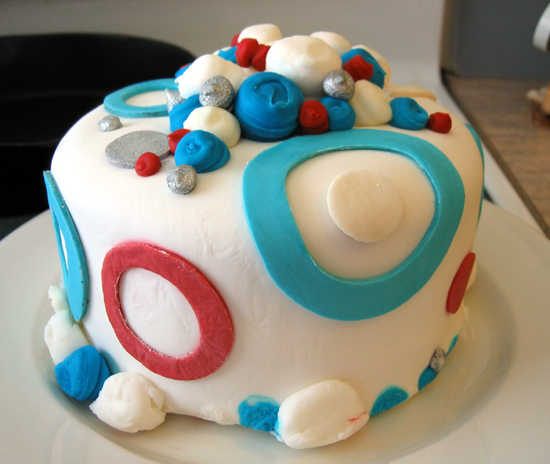 Now granted, the first time I got married, more than 10 years ago, we had a cake baked by an amateur, and we didn't store it well. I know we didn't wrap it in two layers of aluminum foil: just some plastic wrap inside a bent-up cardboard box.

In that instance, our marriage went south almost immediately after eating that stale cake, which I saw as symbolic. So I didn't have high expectations for frozen wedding cake, and I made my feelings known. I suggested we forget about saving the cake and take advantage of the letter sent to us by our bakery, who'd offered to give us a free anniversary cake after we sent them pictures of the wedding. But, though I thought he was overly optimistic, The Gryphon insisted our original wedding cake would be delicious.

After dethawing the cake in our turned-off oven (safe from our curious cat), The Gryphon uncorked some champagne and cut us a slice. Much to my surprise, it was not just palatable but actually good. It didn't even smell like freezer burn.

Of course, this time we'd bought it from a professional baker and had a friend double wrap it in aluminum foil, keeping it safe in her freezer while we enjoyed our honeymoon. Besides transferring it from her place to ours, it had remained safe and secure in our freezer. We were careful not to place anything on top of the box, for fear of damaging the integrity. The result: our cake was just as fresh-tasting as a year ago.

Maybe this wedding cake truly is symbolic. Our marriage is just as fresh (and delicious) today as when we got married. We do, however, still plan to order that free cake.

We celebrated this weekend, since our anniversary falls on a weekday. The Gryphon had made reservations for us months ago at Morimoto [SITE HAS MUSIC], run by the famous Iron Chef Morimoto. We'd walked past it many times and had always wanted to eat there, especially since we're Iron Chef fans.

Our reservations were at 7, so we had time for a matinee. We saw the new Coen Brothers movie, Burn After Reading, which we'd both been looking forward to seeing. I love just about everything the Coen Brothers do, and this film had a fantastic cast: Frances McDormand, Brad Pitt, John Malkovich. The audience laughed out loud quite a bit, but there aren't a lot of traditional jokes. Rather, most of it is situational humor, like George Clooney's character continually remarking on people's flooring.

Burn After Reading is the spy flick that wasn't. Two hapless gym employees (Brad Pitt and Frances McDormand) discover a computer disk they think contains classified information. As it turns out, it contains financial records and notes for a memoir by an ex-CIA analyst (John Malkovich). Of course, this kicks off a series of events I won't describe, since you ought to experience it for yourself. I definitely recommend it for anyone who enjoys dark comedies.

Since we were close enough, we walked to Morimoto. It was only about five blocks through Old City. On the way, we kept getting accosted by people trying to sell us ghost tours and carriage rides. Either we looked like tourists (dressed nicely, as we were) or they do that to everyone on the weekends.

When you enter Morimoto you're greeted by a lighted wall with an image of a woman. As you walk by her, she nods. A large black sculpture sits at the end of the entrance foyer, looking very much like an ancient sea formation, sculpted by the waves. The restaurant itself looks like the inside of a wave: the ceiling is wavy. The backs of the seats glow with an unearthly light, thanks to lights at the base that radiate through the white plastic. When we entered, the color was green, but it changed to red, blue, purple, and yellow about every 10 minutes. Space-age lamps on the tables resemble underwater plants.

We asked our server for suggestions of wine pairings for our meals, and we shared an appetizer of sashimi, which was among the best we've ever tasted. We ate each piece slowly, savoring the tastes and discussing them.

For our main entrees, The Gryphon ordered Ishi Yoki Buri Bop and I had the Sugi-Ita Salmon. His was partially prepared at the table, with the server cooking fish against the sides of the bowl, which had been heated to 350 degrees. He broke and egg and mixed it into the nest of noodles and vegetables, and as he stirred it in the heated bowl, it cooked.

My salmon had been wrapped in cedar planks, which added a subtle smoky taste. The fish was succulent and is the best salmon I've had since the entree at our wedding reception a year ago. My dish was also served with an organic egg, which I don't usually like when they're served in a liquid. But in this case, it was done to perfection.

Even though we knew we had wedding cake to eat later, we split a dessert: coffee gelée, which is served on a tray with two lit birthday candles. As the server delivered it, he wished us happy anniversary. The Gryphon had apparently told them it was our anniversary when he made the reservations. The coffee gelée was a treat: chunks of coffee-flavored gelatin in a chocolatey liquid, topped with coconut and fresh whipped cream.

The restaurant experience reminded me of our honeymoon, when we ate at fantastic Disney World restaurants, each of them carefully planned, from the silverware to the menu, to evoke a feeling. Morimoto was simply magic. Or maybe it was the company.

On the way back to the parking garage, we accepted an offer to take a carriage ride. In all my years living in Philly, I'd never gone on one, and neither had The Gryphon. The driver took us down the alley by the Bourse, down Fourth Street to Walnut, back up Seventh Street and then down Chestnut to his corner. Along the way he told us some history. Surprisingly, I learned a little, such as the fact that Carpenters' Hall was a secret meeting place for the revolution. They wore carpenters' uniforms, because if their activities had been known, they would have been in mortal danger.

For me, the most enjoyable part of the ride was having The Gryphon's arm around me and glancing over to see his calm, happy smile. In his sweet, patient way, he's helping me to make peace with my history and enjoy a delectable present.