This is my entry for Week Three of The Real LJ Idol competition, where the topic is "A Moment of Bliss." I'll post an update about voting later in the week. If you haven't already, you might want to join

therealljidol, since some voting will be restricted to community members. 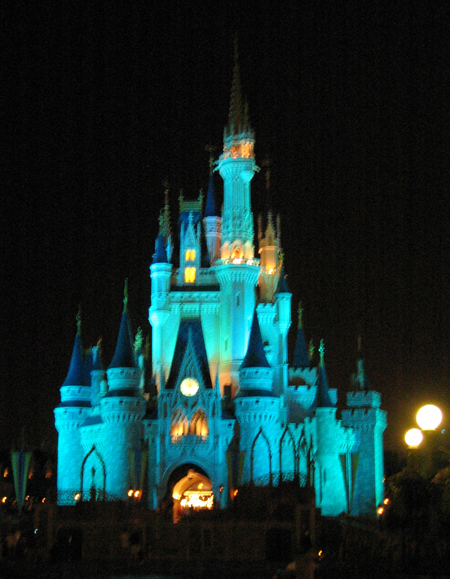 As a stream of lit shapes — flowers, fruit, animals, princesses — glided gracefully by us, tears sprung into my eyes. I was crying. At age 37. At the Happiest Place on Earth.

The nighttime parade of lights in the Magic Kingdom marked the fourth day of my honeymoon with The Gryphon in Orlando. We had selected that destination because of the wealth of wonders to behold, from the Magic Kingdom to the Kennedy Space Center. Since we'd had a Space Age theme at our wedding, we'd also wanted to make a pilgrimage to Epcot's famous geodesic dome.

No matter your age, there's something magic about Disney, from the friendly staff to the efficient planning. Like the real world, but cleaner.

We had been wearing our "Just Married" pins everywhere, given to us when we checked into Disney's Port Orleans resort. Because of this, people did extra things for us, such as a lunch counter cashier at MGM-Disney, who folded a paper napkin into a rose. Park employees (or cast members, as they're called) and attendees wished us congratulations everywhere we went. In one restaurant, we were treated to a complimentary glass of champagne, and in another, the chef wrote "congratulations" in chocolate on our dessert plate. I felt like Cinderella. My Fairy Godmother had sprinkled me with magic dust, and suddenly, I was the belle of the ball.

We'd really seen the difference during the day we spent at the Universal Studios theme park. There, the staff seemed bored, snapping gum and joking with each other rather than paying attention to customers. The lines were long, unless you were willing to pay extra for a special pass. After a day of being treated as just another income stream, the welcoming smiles at Disney seemed magic, indeed.

The contrast was as striking as the contrast between my first husband, The Seeker, a schizophrenic hippie who left me to heed the call of the road; and my second husband, The Gryphon, as kindhearted and wise as the storytelling character in Alice in Wonderland, one of my favorite childhood books.

To extend that analogy, marriage to The Seeker was like standing in line in the hot sun with loud drunkards, all for the promise of brief bouts of happiness. Marriage to The Gryphon, in our year together so far, has been as filled with wonder as the Peter Pan ride; yet, as smooth as a trip on the monorail. Eat your heart out, Minnie.

I'll never forget a conversation we had when we were first dating. We had yet to declare our love for each other, but we were talking about romance in a general way. I told him that I simply didn't believe in love anymore; I'd had too many bad experiences. He gave me a look of earnestness and said, "But you've just got to believe." My inner theme music swelled.

So here we were on our honeymoon, and I was standing next to the sweetest, most supportive guy I've ever met: thoughtful, funny, open-minded, intelligent; as close to Prince Charming as I could ever hope to find (if Prince Charming watched anime and played role-playing games). Yet inside, I still felt, sometimes, like the ash-covered girl in rags. Did I really deserve all this buoyant joy? Was it just a dream that would vanish at the stroke of midnight?

The Gryphon looked down and saw me crying. He hugged me close.

"It's all so beautiful," I told him. Inside, I reminded myself: Believe. 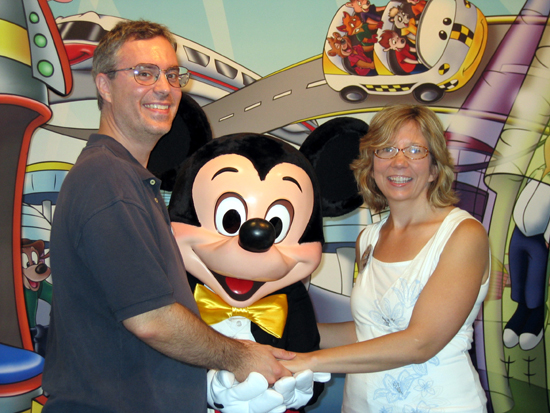 Moral:
Magic is all around if you could but perceive.