It's Friday and time for some found items. In honor of the recent negative turn of the presidential election, I'm going to share some equally negative exchanges, found while walking my dog.

The first is a rather simple note. On the front it reads, "J. is gay." The back says, "So is his friend." Classic schoolyard taunt, and about as sophisticated as the recent barbs tossed by the McCain campaign at Obama. Just substitute "radical" for "gay." 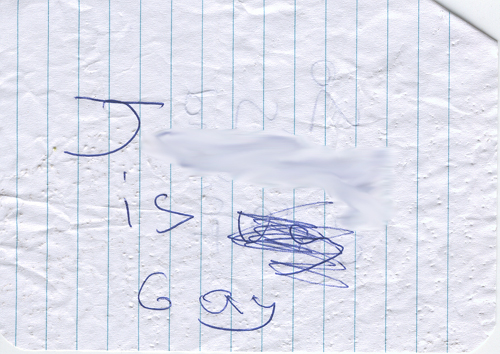 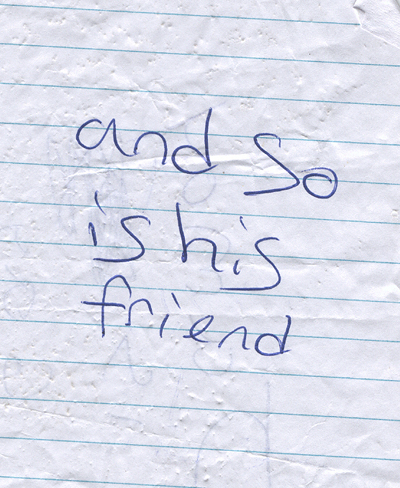 The next note was found in the street and had apparently been placed on someone's windshield. It reads, "Do YOU really think it's fair to park me in like this?" Fair? Since when does a presidential campaign have to be fair? That's like expecting government watchdog agencies to, like, protect the consumer. Sheyah! 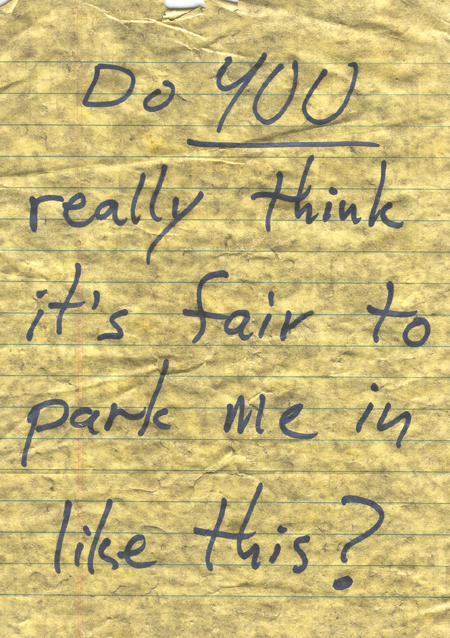 Next is a similar note, which uses even more logic in its appeal to the unknown truck driver. Interestingly, I found it on the ground quite far from the address listed at the bottom of the note, so the truck driver apparently drove away with it and read it later. It says, "You could, at the least, park this truck across the street - or in your lot where there are no homes - this truck is very large & it blocks the view - Also, you are taking up spaces for the residents on this side of the street. Thank you! Residents of (ADDRESS DELETED)!" 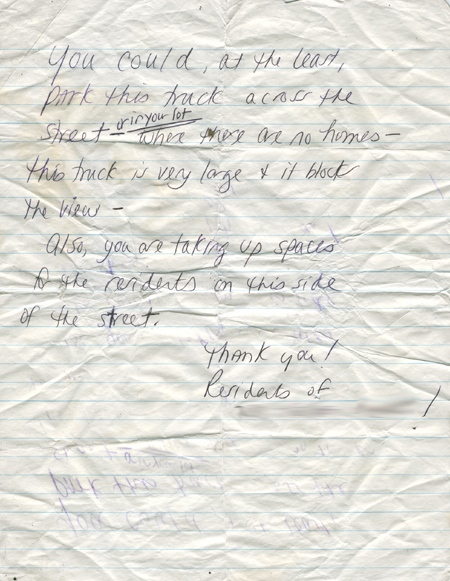 The final find is an e-mail exchange between managers at a retail store. The printed-out emails had been folded together and dropped on the sidewalk.

The first communication, awash with poor punctuation and capitalization, comes from an assistant manager, sent to the other store managers: "I realize we are all very busy, however i am so sick and tired of the schedules being messed up. This is ridiculous, when i close i have to come in and beg people to come in or get ahold of someone to come inn, the staffing is wrong everyday, i cannot close the store like this, i need to know who i have and who is supposed to be here. There are certain associates who do whatever they want, come in when they want they make their own schedule, they do no call no shows and are not held accountable. As managers we all need to realize we are all managers if someone needs to be held accountable then it is all of our jobs to do so, so please don't be offended if we hold associates accountable for wrong doings."

I imagine this is the sort of communication floating around Capitol Hill right now regarding the economic crisis, although hopefully with better grammar and spelling.

The response from one of the managers is much longer and accuses the assistant manager of doing little to solve the problem. It reminded me a little bit of the presidential debates, with one side on the attack and the other offering possible solutions. While this one is also filled with errors, many of them seem to be simple oversights to a lack of proofreading, common to email.

It reads: "This the second or third email you have sent about scheduling. My question to you is what have you done to be a part of the solution of this problem. It easy to take 30 mins to write an email and complain about what everyone else is not doing, but what are you doing YOU to help. Have you gone to other managers to help with their schedules, have you coached anyone for being late and or not following their schedule. I personally have a list with people I need to coach and the ones I have already coached in my drawer, so if you really wanted to help all you had to do was ask. If you have not noticed we are missing four members of management we are all taking on extra responsibilities. E. has taken on running hardlines and consummables, J. is running the night shift alone, and I have taken on running the front end and fixing the issues up there, homelines, electronics, wireless and photo, 1st and second shift in-stock, Claims, directs and DSD, invoicing and personnel, as well as the maintenance crew and ordering the store supplies. And all you have is apparel. I am not complaining about all the areas I have, in fact I don't mind having all that, it keeps me busy. So can I ask you what you are doing to help other than sending us unnecessary emails to read. Please do not be offended by what I am saying, but quite frankly we are all tired of reading the same emails over and over again. It is easy to point the finger that at other people, but there are times when you have just deal with it and work with what you have instead of complaining. There are nights when I have closed with just three people in you area, including the phone person. Do you want me to send out an email every time there is not coverage in your area? How many times have I closed shoes with out and associated, should I send you an email every time there isn't a closer in shoes? Here is a suggestion, try given K. from Shoes a closing or two on the nights that V. is off, that might fix the scheduling issues for shoes. While you are at it, why don't you coach K. for her 7 unapproved absences. There isn't a coaching in the system for attendance yet. When you finish hers, you can coach M. because she is at 6 with no coaching either. There are a few others with attendance problems without coaching but I am not going to mention them because the point I am trying to make is that your area is not perfect and you also have people with attendance problems that haven't been dealt with. Why are we coding our attendance tracking incorrectly? There is a certain MS in apparel that call out one day and it was coded as a business needs absence. How is it an business need for an associate to call out one day because they were sick? As you can see we all have issues in different areas of the store, but the question if again what are you doing to help the total store, not just apparel." 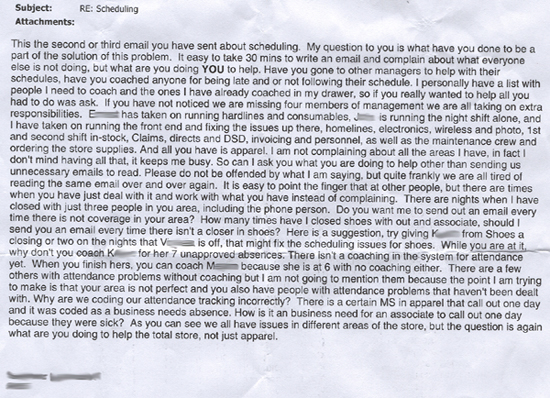 The exchange reminded me a little bit of this exchange between Barack Obama and John McCain on ethics reform. In other words, "What are you doing to help the total store, not just apparel"?

Moral:
Politics is all about the drama.