We knew we were in the right place for Faericon when we saw, behind the registration table, a purple and green faerie with large purple wings. 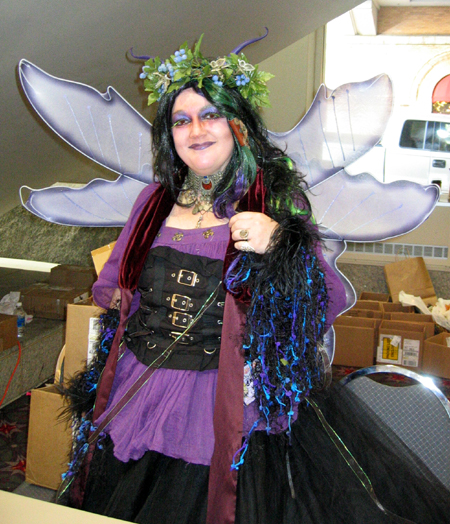 My husband, The Gryphon, and I had entered the Pennsylvania Convention Center in Center City Philadelphia on the second level, which was hosting a conference for workers who deal with retired persons. We saw signs throughout the hallways, announcing Saturday Night Live alum Dana Carvey would be performing Monday night. The Gryphon and I joked we should try to register for that convention so we could come back for the show. Our convention, it turns out, was downstairs.

We had scored tickets to Faericon from our friend, The Anthology Editor, who has helped put together two collections of short stories about faeries. Since we'd never attended Faericon before, we didn't know what to expect, but we'd had a free weekend and thought it would be fun to attend a convention, for once, where we weren't helping to run it.

Since I was getting over a cold, I came prepared, bringing handkerchiefs, cough drops, Sudafed and Ibuprofen (although my aches and pains had subsided, so I didn't have to take any painkillers).

Right inside the entrance, we ran into The Filmmaker, who was chatting with a friend I'll call TitaniumJunky (since that's her online handle), along with The Seamstress, and a woman I didn't recognize who was wearing a Venture Brothers T-shirt featuring the character Dr. Girlfriend.

TitaniumJunky and The Seamstress were wearing brilliant costumes. They were faerie hunters, wearing camouflage and carrying a giant net and large red pins (just in case), Primarily, though, they were interested in tagging faeries with some ingenious magnetic tags which would stay on the wings. TitaniumJunky was taking down information for all the faeries they tagged, for the purpose of tracking their movements. The tags became quite popular, and many faeries were spotted wearing them. If you look carefully, you can see a white tag with the number 105 on this faerie's wing. 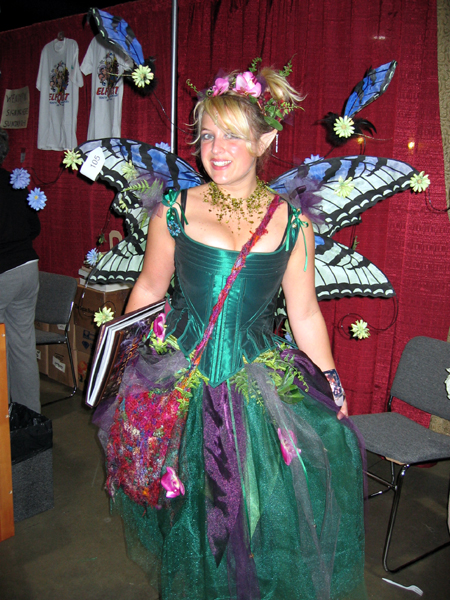 Our friends gave us some bad news: two of the keynote speakers, Brian and Wendy Froud, couldn't attend because of a death in the family. We had been looking forward to hearing from them, because of their work with Jim Henson on The Dark Crystal and Labyrinth, as well as Brian's wonderfully funny Lady Cottington's Pressed Fairy Book. Later, I signed a book for Brian, for those who wanted to send him their good wishes.

The convention took place in one of the larger halls in the convention center, and most of the room was taken up with an assortment of vendor booths, plus two stages on opposite sides of the room for panels, musical performances and other events. The booths sold everything from books to artwork to costuming elements. Honestly, if I'd wanted to, I could have spent hundreds of dollars there.

Before we browsed the booths, though, we walked with TitaniumJunky and The Seamstress to the Philcon table, where we greeted The Browncoat, who was wearing a black top with a laced up front that looked somewhat Goth. She was busy handing out flyers about Philcon but took a couple minutes to talk to us. 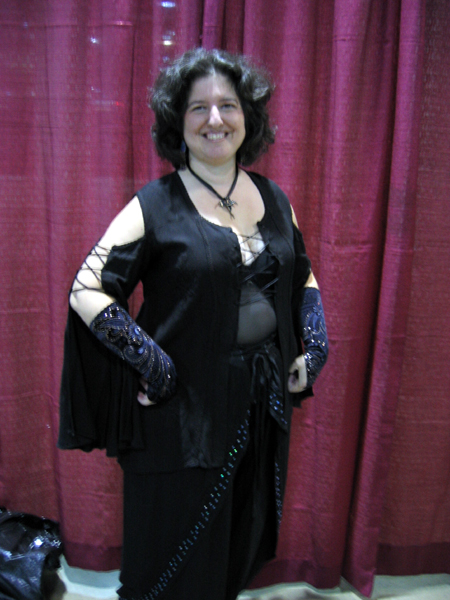 TitaniumJunky and The Seamstress showed us the cage where they had been keeping faeries. They also had created faerie traps, which were rat traps with little skeletons stuck to them. A bit macabre, but funny.

Next, we stopped by The Anthology Editor's table. She was dressed as a faerie but was having trouble with her wings, which prohibited her movement between the merchandise and her cash register. She agreed to don them again for a photo, though. 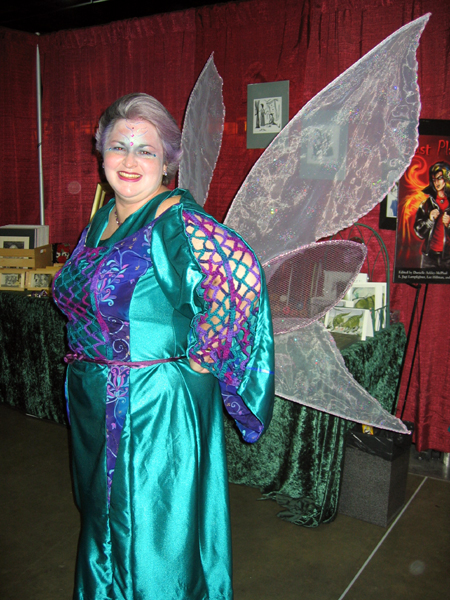 The Gryphon and I took a look around at the different booths. I loved a lot of the items, including a lot of terrific belly dancing merchandise. Since I'm not currently taking a class, though, I restrained myself. I did purchase a great necklace of multicolored stones from one vendor, as well as, of course, some books from The Anthology Editor.

I was also lucky enough to meet an artist whose work I love, Helena Nelson-Reed. She had done a calendar featuring goddesses which I'd bought in a New Age store about seven or eight years ago and had loved so much that I used the different pictures as decor in my apartment afterwards. So I bought both a new calendar and a print, which I will frame and hang in my office.

She told me a little about her artistic method, of how much she enjoys incorporating symbology into her paintings. While she tries not to overwhelm people with explanations of her works, she often includes explanations of the symbols with her prints, so as to deepen appreciation of their intricacies. I purchased a print of the Lady of the Wildwood, which comes with a sheet explaining all the different symbolic elements. It's a very intricate piece, incorporating, and it's always spoken to me.

If I'd been certain I'd wear it anywhere else but on Halloween, I would have been interested in some of the fanciful clothing. I did browse some racks of imported clothing, but I didn't find anything that really jumped out at me.

Once we'd seen the entire room, we returned to the Philcon table, where we spoke to DJ Rock, who wished us happy anniversary. He, of course, had been the DJ at our wedding just over a year ago. 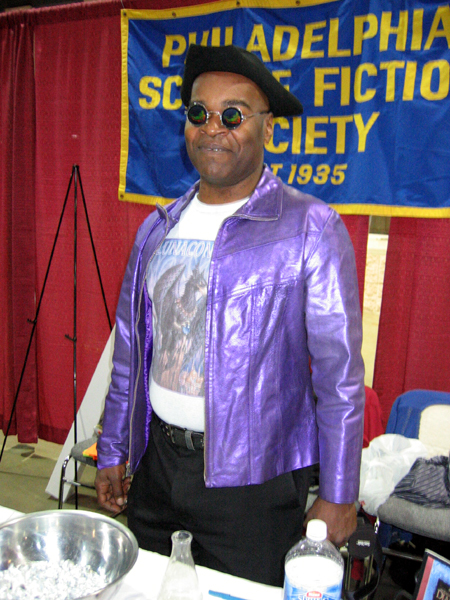 Speaking of anniversaries, I learned it was the anniversary that day of The Anthology Editor and her husband, who observed it by working really hard! Hopefully, they'll get a change to celebrate later.

We made our way then to the Faerie Fashion Show, which I thought was going to be just a costume contest. Really, it was a showcase for the designers and vendors who were selling their wares at Faeriecon. Some of the creations were very impressive, but my camera battery was dying, and I was on my last battery backup. Plus, I'd been having problems with my camera all day, with it refusing to play back pics, so that I couldn't even see what I was getting. I got just a few photos that are good enough to share. 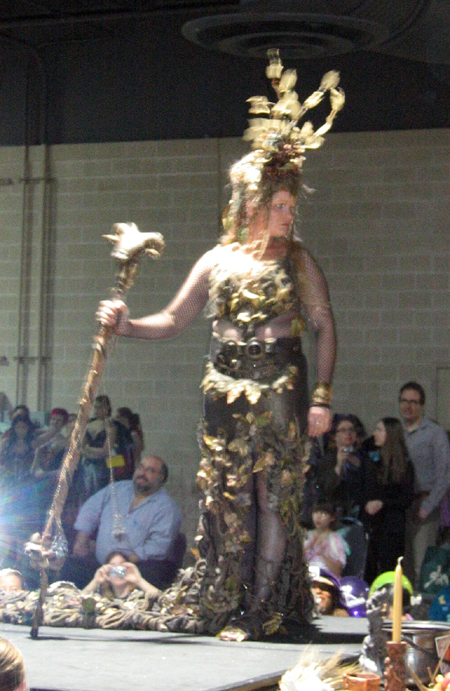 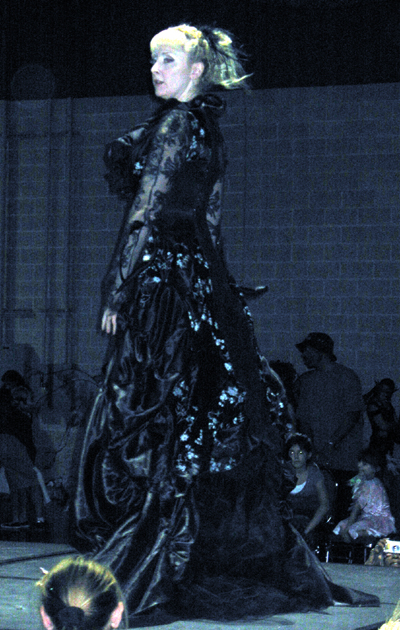 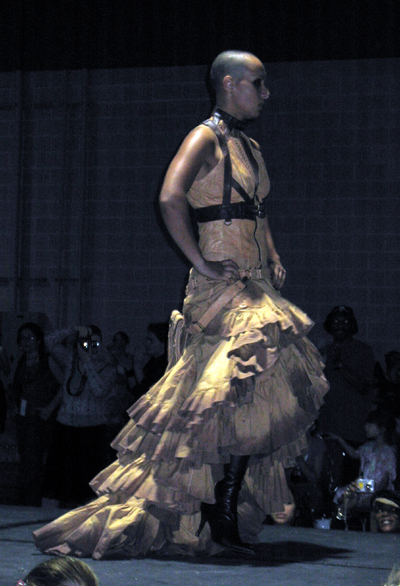 At the end, I did get a video of the final promenade of all the costumes. As you can see, some of the outfits were so sophisticated they could be called Faerie Couture.

Some of the models had clearly been chosen because the person was somebody's friend or because they fit the outfit. These models seemed awkward, hesitant. Others glided down the runway and even took enough time at the end of the runway for photographers to get good photos. And a few of them seemed professional enough that I wondered if they'd modeled before.

For the remainder of the time the convention was open, we mainly chatted with friends, although we did sit in on one panel, called "The Gifts of the Faerie Women." This consisted of several women discussing what gifts the faeries had bestowed upon them and others. One panelist said that her creativity and writing ability was a gift from the faeries. The panel wasn't exactly what I expected: I thought they'd take a mythological or scholarly approach. It was interesting, although when I started to have trouble controlling my cough, we got up.

The convention closed at 6, although there would be a dress ball later, ticketed separately, which The Gryphon and I weren't attending. We got together with The Browncoat to grab dinner after she closed down the Philcon table. She suggested The Spaghetti Warehouse, and we drove there in her car.

Just like it sounds, the restaurant is housed in a large building, a moderately-priced family Italian restaurant with vintage signs and memorabilia on the walls. In the middle of the floor was an old trolly car, and I was delighted when they seated us inside it. I ordered a tilapia dish that came with shrimp, grilled vegetables, and pasta in garlic butter sauce. The spaghetti was tasty but could have done with less butter (it was swimming in it). The tilapia had a nice crust on it and was flaky and delicious.

Afterwards, the three of us split a piece of chocolate cake. I'm glad that we were splitting it, because I wouldn't have been able to finish it on my own.

As I was going to the ladies' room, I saw someone coming in from the other direction, a thin, blonde woman who looked very put together, I thought. Then I realized I was looking at a wall-sized mirror, and I had to laugh. Ah, the magic of faerie.