Sometimes, I find something.while walking the dog that tells an entire story. This one reads like a Law & Order episode, albeit with worse grammar and spelling.

At the top is written, "10 months," which might be the amount of time since the crime occurred. Following are notes an interested party wrote before meeting with the investigating police officer.

Did u find out about D.

Did u questioned R.

Did she Idenify a photo yet

What about T. cell phone. it's should help

Any Tips come in.

give out government checks. Did u ever question g. about T. having
problems with anyone. get her computer, cell phone. she do lots of texting, checks

Why was one cell left at the scence

messages, numbers, names, but it was left.

the one yall took no leads. suspicious

Do S. and T. go together

Is he in jail

Someone knew where he lived that shouldn't known. 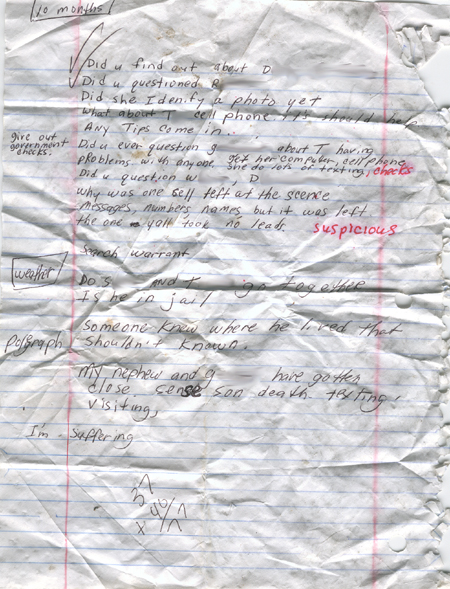 I was particularly struck by the last line, which brings home the impact of this unsolved crime. If this were a Law & Order episode, this scene with the victim would fade to black, and after the commercial break, Eliot Stabler would be roughing up some thugs.

Moral:
We need more police who can solve a crime in 60 minutes (with commercials).