This is my entry for Week Five of The Real LJ Idol competition, where the topic is "Open Topic," meaning we can write about anything we like. I'll post an update about voting later in the week. If you haven't already, you may want to join

therealljidol, since some voting will be restricted to community members. Thanks so much to everyone who has voted for me so far! 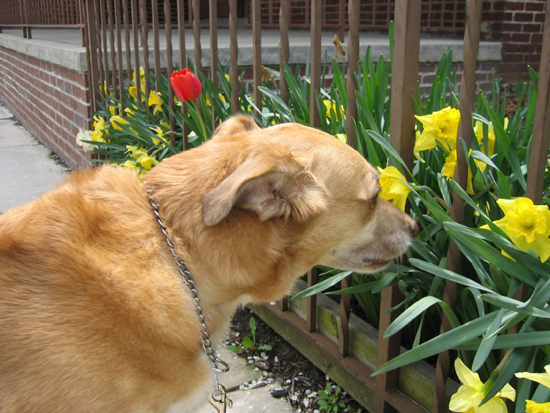 Before I met my dog, Una, I'd always been a cat person. Cats, to me, were graceful and contemplative, while dogs were goofy and clumsy. But when my brother's intelligent, sweet-natured dog, Pulsar, had puppies, I agreed to adopt one. And thus began my reeducation.

I traveled across the country to Colorado to meet her, this blonde, fluffy handful of affection. Over my visit, I made an effort to bond with her, and by the end of the week, she was following me around, whining when I shut a door between us. As Una would soon teach me, dogs are connoisseurs of existence; they are artists and poets of life.

How else to explain the rampant joy Una experiences from sniffing a pile of leaves? Like someone who appreciates fine wines, she snorfles the scent into her nose, sorts out the complex bouquet of earth, woodiness and just a hint of mildew, along with the vinegar smells of other dogs. Always the artist, she adds her own contribution: a few drops of Eau d'Una.

When I left her alone in our apartment for the first time, I returned to find the aftermath of Hurricane Una: shredded tissues, demolished audio cassettes, and the piece de resistance, a chewed-up hair dryer, still plugged into the wall, shooting sparks. I should have recognized this scene for what it was, an abstract art piece. Far from being deliberately destructive, Una had engaged in a sensory orgy, first sniffing, then chewing all the strange items she found around her. As she put them in her mouth, she contemplated the big issues: What is this? Why is it here? Is it food?

Those youthful days of artistic exploration have given way to a more sedate contemplation of the world that surrounds her. These days, Una engages in the quiet meditation of sensory encounters as we walk around our suburban Philadelphia neighborhood. Her nose's refined pallet can suss out the citrus nuances of marigolds or rejoice in the ripe richness of a garbage can.

I have Una to thank for helping me to discover some of the small details of our neighborhood, such as:

Wouldn't it be better if we, like dogs, appreciated the beauty around us, in all its imperfect glory? To a dog, there are no bad hair days. There are no garish lawn displays. There is simply a world of wonder. And it smells amazing.

ETA: If you enjoyed this, read the sequel, Secret Agent Cat.