While my dog, Una, is a poet at heart, our cat, Luke, is an international cat of mystery.

When we adopted the orphan white and ginger cat with food allergies, we had no idea we were bringing home a feline James Bond. Whether prowling the kitchen, looking for ninjas disguised as mice, or lounging on the back of a chair, as if lying on the beaches of Southern France, Luke is calm, cool and collected.

I would add that he is pretty, but as my husband, The Gryphon, reminds me, boy cats are not pretty; they are fierce. Luke is, indeed, fierce in both senses of the word. 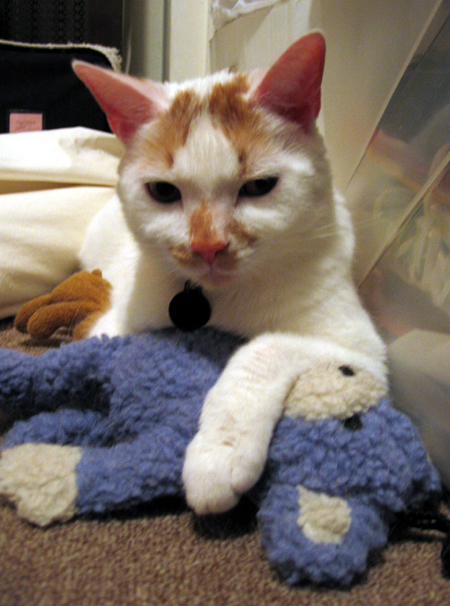 To prove this point, you need only consider the mouse situation. We live on a block of row houses in suburban Philadelphia, meaning it is virtually impossible to exile all mice, barring a neighborhood agreement to perform an extermination and seal up all possible entrances. We spotted the first mouse when we'd barely unpacked our stuff, and they had become a continual nuisance, zipping around the corners and frightening the dog (She's a lover, not a fighter).

Then our fearless secret agent arrived and put them in their place. He caught one mouse, letting him live so that he could tell the others a new sheriff was in town. Soon, the mouse ninjas moved their base of operations elsewhere, fearing the sinuous white spook who now roamed our rooms.

Luke has one confirmed kill, which happened while we were celebrating New Year's Eve at a friend's place. Ironically, we were joking at the party about how he'd caught several mice but allowed them to live. We came home to find a dead mouse with its butt chewed off. Luke assured us he had it coming.

While he works, Luke is serious, but he is equally serious about playtime. Being a cat, he does not ski or sail, but he does chase laser pointers. He makes his demands clear, tapping me on the leg with his paw. If he wants to be petted, he puts his front paws up as if to say, "Pick me up now." If he wants to play, he makes a "bloop" noise, runs away a couple steps and looks back, as if to say, "Playtime now." I keep a cat toy in my office so I can take play breaks. Otherwise, Luke continues to run through the same routine, again and again, until I get the point.

The Gryphon says Luke's got me trained. I prefer to think of it as keeping our mouse enforcer happy.

Since Luke takes his work and his play so seriously, The Gryphon and I share an in-joke that Luke asks for specialized equipment to aid in his duties.

"Luke wants a flamethrower," The Gryphon will say.

"So he can exterminate squirrel ninjas from the window sill."

The next time, I might say, "Luke wants an armored saddle and a battle lance."

"So he can ride Una into battle. Oh, and he also wants riding lessons."

Of course, the answer is always no. I'm also fairly certain if we presented these devices to Luke, he would regard them with casual disinterest and then continue licking his paw, making it clear he has no need for such things. After all, didn't we see the butt-less mouse?

While Luke is generally cool as a cucumber, he does have his weakness. He hides from any guests, perhaps believing they are counter-agents, sent to abduct him. The only person he trusts is the pet sitter who feeds him while we're away. I don't know, though, if he realizes we know about her. Perhaps he thinks she's a covert agent, summoned by a secret transmitter in his mind.

We forgive Luke's quirks because, after all, what international cat of mystery does not have his weaknesses? Plus, our house is now free of mouse ninjas, a definite perk. Now, if you'll excuse me, I need to get Luke a cat food martini, shaken not stirred.

Moral:
Ninjas can disguise themselves as anything.