This weekend on Saturday, my husband, The Gryphon, and I had to choose between attending the annual Halloween party at the home of our friends, The Book Lover and The Martial Artist, or to sit in on a long, dry Otakon budget meeting. This might sound like a no-brainer, but The Gryphon and I will both be holding important positions this year (The Gryphon will help run Industry Relations and I'm heading Press Relations). Therefore, we decided to do both. 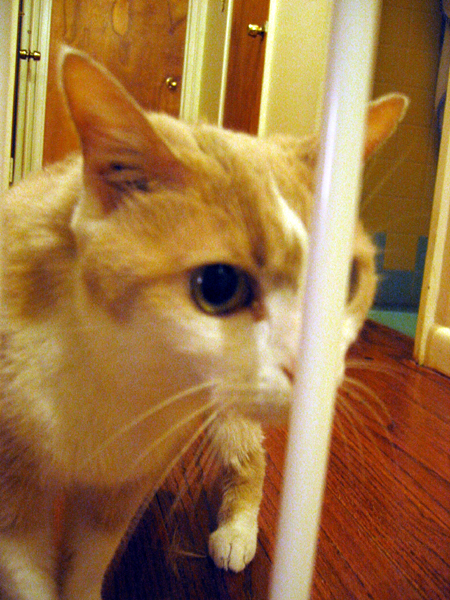 I'm here, but I want to be there

The Gryphon is also serving on the board of directors as a member-at-large, the meeting for which started at 10:30 a.m. Despite our best efforts, we arrived a few minutes late. The meeting was in the new Hilton in the Inner Harbor, and both the space and the staff service was good. I was happy to spot numerous outlets, which made it easy to plug in The Gryphon's laptop.

After the board meeting, there was a short break, so I walked across the street to grab lunch. I picked up a chicken burrito at California Tortilla for The Gryphon and gave a friend money to buy me a six-inch turkey sub at Subway, next door. We chatted happily as we all waited for our food selections and then returned to the meeting. The Hugger told me that sometime soon she'll be sharing pics from her Disney World vacation, and we also talked about Halloween costumes and such.

We ate our lunches as the budget meeting began. One advantage of the meeting being on the weekend before Halloween: it was poorly attended, meaning there was less squabbling over specific line items. Sometimes, however, someone who had submitted a budget for a specific department had to be called to explain things.

At least we got a chance to talk to our shared supervisor, The Godfather, who will run Guest Relations again. He gave us some guidance of what we need to be doing next. We stayed until he finished delivering his remarks about the part of the budget that pertained to us, and then we packed up our bags to go.

Of course, we didn't actually get to leave the building until about 4:30, because we got into conversations with people in the hallway. Finally, though, we were headed back to Philly. We'd packed sandwiches, carrots, granola bars, applesauce, and sugar free pudding for dinner, and we made plans to stop at the first rest area to eat them. On the way, the rain accelerated from a drizzle to a full-blown squall, with walls of water pouring down so that we had to drop below the speed limit, praying that we avoided an accident.

As we ate our sandwiches at the first rest area, we hoped the rain would ease up. At first, it seemed like it had, but perhaps the storm had just skipped ahead, because we soon met up with it. This slowed us down immeasurably, in part due to the group think of other drivers. Everyone had dropped below the speed limit, and when the rain tapered off, a lot of water still lay on the road, so everyone continued to drive slowly.

Every time it seemed as if the skies had cleared and the roads drained, I'd hit a patch of water that gave us a couple seconds of silent terror, as my tires stopped gripping the road and I held the wheel steady, hoping to regain traction soon.

Mapquest estimated the drive would take us two and a half hours, to which we'd mentally added half an hour, knowing we would be making stops. The trip took more like four hours. When we arrived, the rain was still pouring down, but I brought my Halloween costume inside, in a bag, planning to change if everyone was still in costume.

By the time we arrived, most of the people who had worn costumes had already removed them. Only the vestiges remained, like the dark hair and fake mustache of The Photographer's Gomez Adams costume. His wife, The Cousin, had already changed out of her Morticia Adams costume. 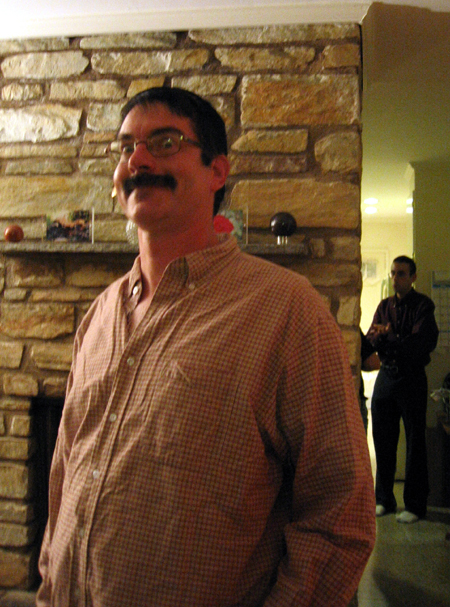 Everyone greeted us warmly, and we told them about how our ride up had been made of fail. By the time we arrived, the guests consisted of Pimp Daddy (who opened the door for us), The Genealogist, The Dormouse, The White Rabbit, The March Hare, The Cheshire Cat and The Paper, the ex-husband of my College Roommate, The Cousin and The Photographer and their two daughters, The Punster, The Warrior Princess, The Court Wizard, The Devil's Advocate, and of course, our hosts, The Martial Artist and The Book Lover.

While he wasn't wearing it when I arrived, The March Hare donned his mad scientist costume for me to take a pic. 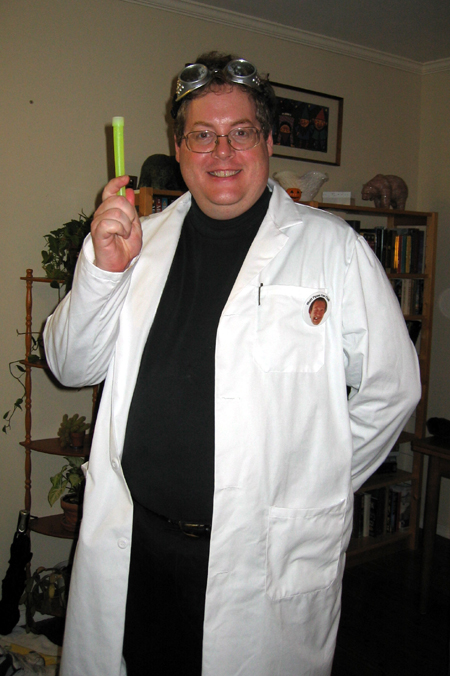 Shortly after arriving, I had a very surprising and pleasant encounter with the household cat. The only other time I'd seen her was when she was in a pet carrier during the move into this house. I don't know if she's getting braver or it was simply good timing.

She was lying on a cardboard box in the bathroom when I entered, closing the door behind me without realizing she was there. Instead of spooking and trying to escape, she regarded me quietly. I talked nicely to her, and soon enough she was allowing me to pet her. She even followed me out into the hallway, then, where she peered with curiosity down the stairs in the direction of all the noise but opted to stay in her safety zone. I even managed to capture a few pictures of her. 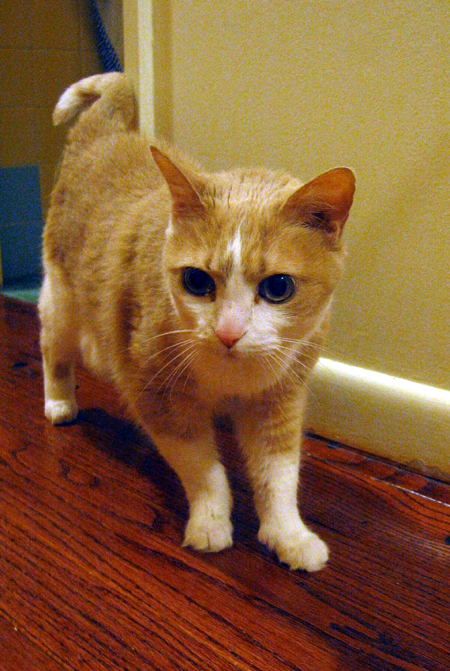 I made my way to the kitchen and poured myself some wine, talking with a number of people. Then I went downstairs to the family room where they were watching, I believe, a Russian horror film. I said hello to our hostess, The Book Lover, who was still in costume, as a wench. She'd made part of the costume but had actually bought the corset years ago at Hot Topic. 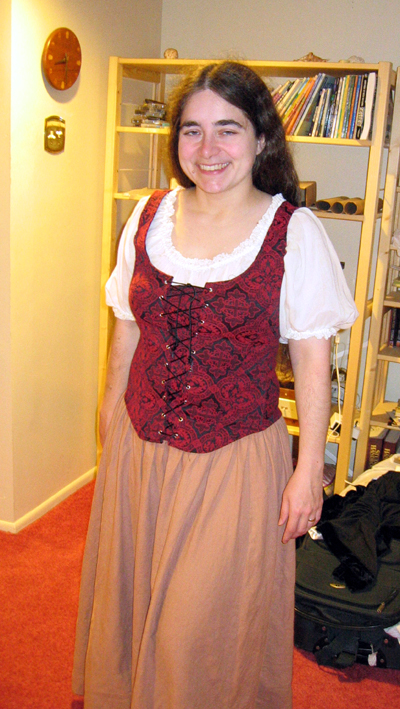 The Cousin's eldest daughter asked, "Hot Topic was a store back then?"

"Yes," I told her. "Things existed before you heard of them."

She smiled. The eldest daughter is brilliant teenager with a wry, self-deprecating sense of humor. I love to joke around with her and also with their youngest daughter, who is bouncy and silly. In fact, I told The Cousin once that I hope, if I have daughters, I can do as good of a job raising them.

The Book Lover and I got into an intellectually exciting conversation that ranged from the current political climate in the U.S. to linguistics, child-rearing and diversity. I can't remember the last time I got to talk to her for such a long time. We both moved upstairs, then, to mingle.

For our food contribution, we'd brought dried fruit, which we knew would be safe sitting in our car all day. I sampled some of the homemade baked goods and managed to restrain myself from dipping too much into the Halloween pumpkin filled with candy. I only took two caramels, the kind with the powdered sugar inside, which I love. I suppose I could always buy a bag of caramels, but then they'd be sitting around the house, tempting me. 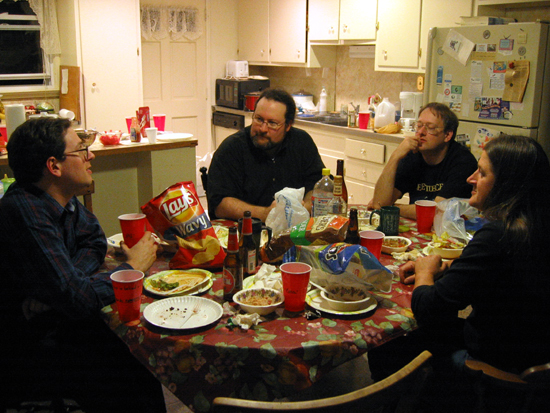 The Punster, The Cheshire Cat, The White Rabbit and the Warrior Princess

At the end of the evening, I got into a fun conversation with some fellow alumni of the Penn State Monty Python Society. It started with The Dormouse talking about looking through old college pics, and I asked him if he had any of himself participating in the weekly showing of The Rocky Horror Picture Show. He claimed he didn't, so I pressed him for the names of people who might have pictures, especially as Frank N Furter.

Mainly, I was just messing with him, but when someone asked me why I wanted them, I surprised myself with the answer: "I never got to see him perform, because I was dating a jerk at the time who didn't want me to go anywhere he didn't approve." This was true, and I realized with a shock that I'd missed out on a lot of activities with my friends back then, simply because of this jerk, Leechboy. Fortunately, he's long gone from my life now, and my friends are still part of it. Everything is as it should be.

We carried the conversation into the living room. I was claiming every chair just before someone sat in it: "I claim that rocker! Oh!" The only person to whom this gave pause was The Court Wizard, who said, "Now I feel guilty about sitting down." I told him not to worry, because I'd claimed all the chairs. I ended up perched on a stool, which no one wanted, but I claimed it first anyway.

The conversation, between The March Hare, The Cheshire Cat, The Court Wizard, The Dormouse and I (and passively, The Paper, who had a sore throat and so chose to only listen), became a nostalgic rant about how we'd missed all the good parties back in college. We'd all heard stories from our friends about the debauchery that used to go on at Penn State Science Fiction Society (PSSFS) parties, and yet few of us had attended such events.

"I've never been to a party where someone got naked," I lamented. Then added, "That's not an invitation."

It was a gloriously silly group endeavor, with us feeding off each other's comments, adopting outrageous accents, and behaving much the same way we used to in our Penn State Monty Python Society days.

The Gryphon tapped me on the shoulder, then, to let me know he was tired and wanted to head home. Perhaps I heaved a little too large of a sigh, but I told him we could head out. Thus, we unintentionally began the exodus, since it was after 11 p.m., and a small child was attempting to sleep upstairs (we'd apparently missed him serenading the party with his toy guitar earlier).

We'd been delayed by rain and official business, but the party was worth it. Even if there was no debauchery. 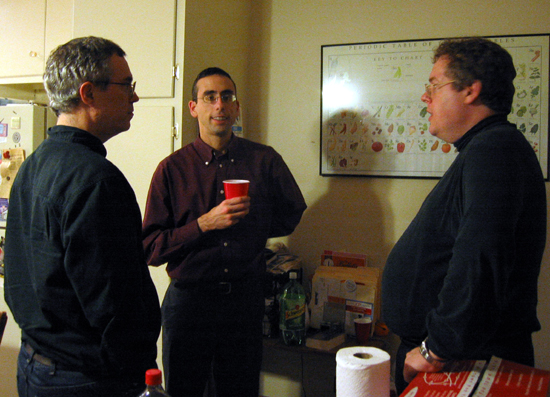 The Gryphon, The Court Wizard and The March Hare in conversation.
Note the distinct lack of debauchery.

Moral:
Things existed before you heard of them.