See Me, Hear Me

When we were in high school, my brother owned a lot of albums by The Who [SITE HAS MUSIC]. He let me listen to them, which I did frequently. I loved how their music blended pure rock with both silliness and a poet's sensibility.

So when I learned they were coming to Philly, I suggested that my husband, The Gryphon, and I go. The concert was Sunday at the Wachovia Center, in the same complex as a World Series game between the Phillies and the Rays.

photo by the Associated Press

In yet another nearby stadium, an Eagles game had been held in the afternoon, so we decided to avoid driving. First, we took the high speed train to Center City to grab some dinner. We ate at one of our favorite restaurants, Passage to India, which offers an Indian buffet. It's quick, easy and has a good selection.

We sat next to two young women who seemed to be old friends. One of them had a large overnight bag. When one of their phones went off, I checked mine. She thought it was funny that I had a similar ring tone, because she said people tell her that hers sounds like Christmas music. Later in the meal, my phone really did ring. It was my sister, to make arrangements for Thanksgiving. My brother and his family are visiting from Vermont, so we have to be creative about sleeping arrangements.

When we finished dinner, we walked down to Capogiro for some gelato. I chose a peach brandy flavor, which the guy behind the counter suggested pairing with hazelnut. He was right; it was terrific.

We made it to the Broad Street El with time to spare, intending to ride it to the end of the line, Pattison Station, a short walk from the Sports Complex. As you might imagine, we were joined by a multitude of Phillies fans, all of them in good spirits. Sprinkled amongst them, you could spot The Who fans. They were either wearing Who T-shirts or looked like they were dressed for a night out, rather than being bundled up to sit in a stadium and cheer on their team.

The first train was so crowded that we opted to wait, and the second train even had empty seats. I had a good time people watching. Some people wore classic Phillies garb, with the maroon and pale blue of days gone by. Most of the train was a sea of red and white. You could pick out two types of conversations: sports and music.

Everyone was really well behaved until we got to the end of the line. Then, on the platform, people started doing cheers. I clapped along, smiling with all the Phils fans. At ground level, a SEPTA employee was handing out free pennants. A couple Who fans took them anyway, including me (I later lost it). As a bunch of Who fans waited to cross the street to head for the Wachovia Center, a gray-haired man waved his pennant and said, "Too bad they didn't have any Pete Townshend pennants."

Some of the concert goers were also wearing Phillies gear, supporting their team from a distance. Throughout the night, people shouted updates to anyone who would listen, keeping track either on the TVs at the concession stands or through text-messaging friends.

Our seats were in the nosebleed section, yet we actually had a pretty good angle, since we were off to the side. We each nursed a drink and waited for the opening act.

They were a punk band from Canada called Inward Eye [SITE HAS MUSIC]. They've got a pared down sound, with just a guitarist/vocalist, bassist and drummer. I thought the bassist looked a little like Bill from Bill and Ted's Excellent Adventure, at least from our perspective. This was funny, because The Gryphon had just been telling me they're going to do a remake of that cinema classic. Whoa.

The crowd was hesitant at first, but Inward Eye won them over. They demonstrated impressive musicianship for a bunch of young punks, even launching into harmony for some of their songs. I had a little trouble making out the lyrics, but that's not unusual with punk. By the end of the set, they'd probably earned some new fans.

Then there was the usual wait for the stage to be converted, and the anticipation built. Then The Gryphon tapped my shoulder and pointed. From our angle, we could see the hallway leading up to the stage, and we saw a couple very familiar profiles walking out. Pete Townshend sat down on an amp to tie his shoes. Both he and Roger looked very relaxed. I guess after a while this is just second nature.

As they strolled onto the stage, Pete Townshend gave the crowd a big-armed wave, and everyone erupted with cheers. They started off the night with a pared-down version of "Can't Explain," following that with "The Seeker." Then they sequed into "Fragments" from their newest album, Endless Wire, which reflects on their career in music.

Despite the fact that it was a stadium performance, at many times it felt much more intimate. The Who have always been all about the music, so they didn't have the huge screens to the side of the stage, projecting images of their faces from a closed-circuit camera. Instead, they projected loops of images behind them, which matched each of the songs they performed. Both Pete and Roger Daltrey took turns talking between the songs. With the newer songs, Roger often explained a little about what it was about. With the older songs, Pete often took the initiative, cracking some jokes and then hinting at what the song was, making people laugh and cheer as they guessed what was coming.

Throughout the night, they interspersed some of their lesser-known songs with their big hits, mixing in the new songs. Among other songs, they offered up "Sister Disco," "Behind Blue Eyes," "Getting in Tune," "Won't Get Fooled Again," "The Song is Over," "My Generation," and a high-octane version of "Baba O'Riley" which had the entire stadium screaming along. "Teenage wasteland. Just a teenage wasteland," they all sang, and suddenly the stadium was filled with teenagers. Looking around me, I could see a number of people singing along, lifted by the music, pumping fists in the air or swaying to the beat.

I loved the fact that Roger gave us some insights into the songs he was playing. Like, when he sang "A Real Good Looking Boy," he explained it was based on his experience seeing Elvis on TV for the first time and how it inspired him to see himself as a rock star. I thought the song really spoke to the down-to-earth attitude of the band. In it, Roger is elated by the music and sees himself as a "real good-looking boy," but his mom shoots down his dreams, telling him he's not as attractive of Elvis. Yet, he eventually finds love and learns to accept himself for who he is.

Throughout the show, both Roger and Pete pulled out their performance tricks. Pete did endless windmills with the guitar, to the delight of fans. Roger delighted in whipping his microphone around by the chord, catching it in his hand with a little hop. The Gryphon found this amusing and said that was Roger's geekiness coming out. I said, "Yes, but that's why we love him."

For an encore, Pete announced that, "We're going to do something from an opera now. You'll know what I mean if you remember who we are." They performed a medley of songs from Tommy, including "Pinball Wizard," "Do You Think It's Alright?", "I'm Free" and "See Me Feel Me/Listening to You." This last part, they seemed to be addressing to the fans: "Listening to you I get the music / Gazing at you I get the heat. / Following you I climb the mountain. / I get excitement at your feet!"

The medley was met with enthusiasm, with many fans jumping to their feet. There's nothing quite like being in a stadium filled with thousands of people, everyone singing at the top of their lungs, "That deaf, dumb and blind kid sure plays a mean pinball."

At the very end, the touring band left the stage, leaving just Pete and Roger. They stood in a spotlight in the center, arms around each other while the crowd cheered. Then Pete picked up his guitar and began to play. Roger sang, softly and earnestly, a song from Endless Wire, "Tea & Theatre." It's a beautiful reflection on their musical career together and a tribute to the band members who have passed on, drummer Keith Moon and bassist John Entwistle.

Here's Roger and Pete performing the song in Washington, D.C., in 2007.

As the hushed stadium erupted with applause, they took their last bows, Roger thanking us for joining "the tea party." I couldn't help smiling, thinking of The Rutles.

By the time we left, the Phils were up by several runs, and the Phillies chants resumed. We rode home in a wave of good feeling, as The Who fans alternately chatted about the concert and cheered about the World Series game, which was still going. We kept hearing updates all the way home, from the Broad Street El to the Market-Frankford line and then a cab back from 30th Street Station.

Outside 30th Street Station, I saw the Cira Center was lit up with the Phillies logo. It seemed like the whole city was united in elation. 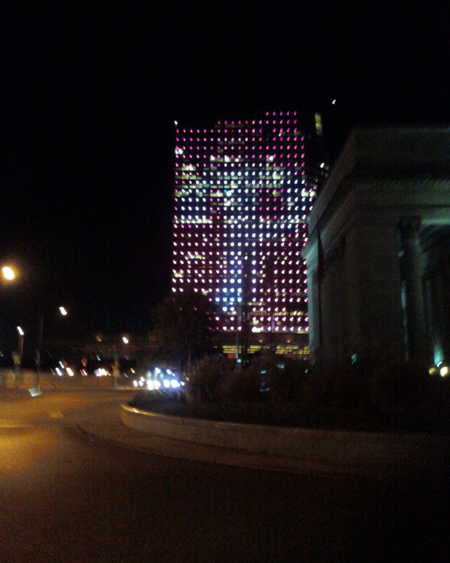