In honor of Halloween, here are some found items that relate to the holiday. I picked them up while walking my dog, Una.

First, a rather obvious one: a bat. It resembles the Batman insignia, is about two inches wide, and is printed on a flimsy cardboard. No doubt it was part of the packaging for some toy related to the franchise. Or maybe it was a portion of some very large bat confetti. 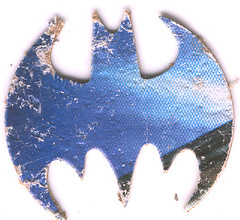 Next is a drawing of a very stylized skeleton with a bubble coming out of his mouth, saying, "Boo!" He looks almost animatronic, with a large, extended breast plate and two sets of snake-like arms. Perhaps it's the skeleton of an alien. Boo. 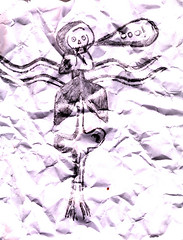 The next found item shows evidence of a scary obsession. It's apparently a paper handed out in school that says at the top, "Healthy Children: See how many words you can make out of the phrase 'healthy children.' The words must be more than 3 letters long....Have Fun."

Instead, someone has scrawled the same name repeatedly: "Markee, Markee, Mark eee," followed by the word "football," which is written on top of lines as if it was the answer to a game of Hangman. Yet, oddly, although the word has been completed, a completed figure (complete with eyes) is swinging from a gallows above. Also, there is a distinct lack of evidence that anyone was trying out letters and failing (one normally writes the incorrect letters somewhere, to keep track). Was this "Markee"-obsessed person playing Hangman by his or herself? Creepy. 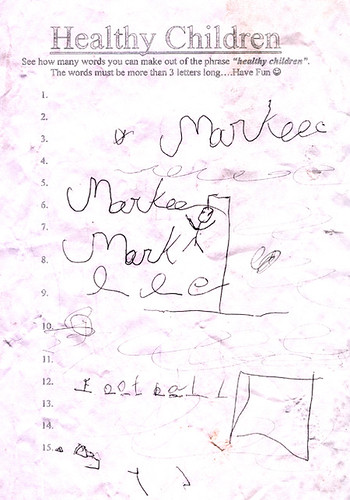 On the back is a drawing of three individuals, presumably football players. Two are faceless and bear the numbers "88" and "19." A third is the only one with eyes and has no number. Plus, this one has been crossed off. Could this be Markee? Healthy children my left foot. 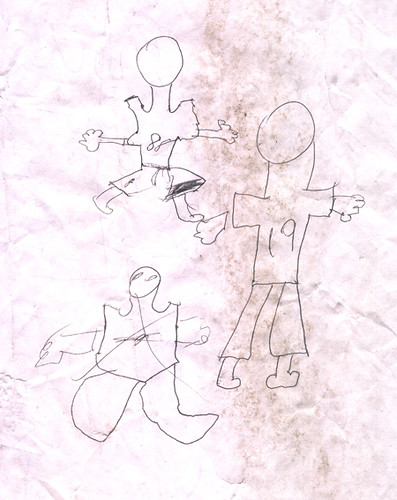 Next we witness the horrid heartache of young love. First, we find a piece of notebook paper where someone has carefully written block letters in orange and brown marker: "D+D = H." ("H" meaning hearts, perhaps?) The letters are surrounded by two-colored hearts. But when I found it, the creation had been ripped in three pieces. Why? 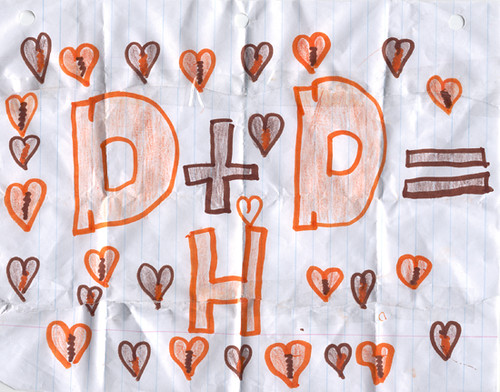 The answer comes on another sheet of notebook paper, found with the first and also ripped into thirds. In alternating orange and brown letters, it reads, "If you didn't like me then why did you give me a ring!!!!" I'm sure we're all haunted by such memories.

The next item is another class exercise, where the students were apparently supposed to write about things that were bad. I'm mainly including this one because of one particular line. The spelling is pretty scary, too. It reads: "I have fights too (ph) toys. I did not see my there (ph). I have bad bay. (ph) I hav a Bat Blog. My siser is casing on DUCI (ph)." 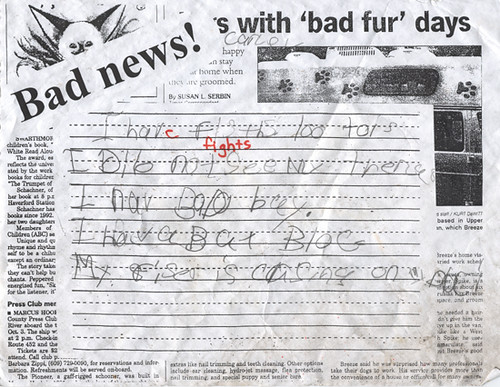 On the back is a drawing that seems rather innocuous at first. Wait a minute. Are those two blissed-old people standing next to a burning building? Don't forget to give this kid candy on Halloween. 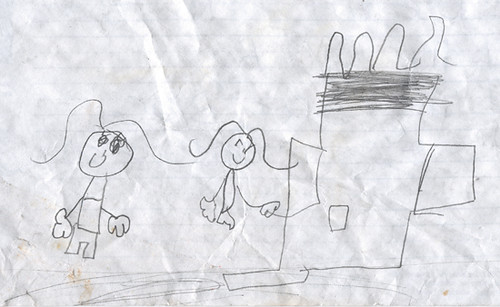 The final find is a handout that seems to have been part of a class assignment, perhaps for high school. It is titled "Big Eater's Wife" and is subtitled "A Pequot Legend." It tells a rather rambling and, I believe, misogynistic, tale about how a ravaging male is finally defeated by a resourceful woman, who in the tale is called an "evil ghost woman." In this tale, no means yes, violence against women is OK, and fighting back is "evil." (If those subjects are triggers for you, do not read any further.)

Big Eater ate and ate. He never stopped eating. He had his wigwam and two canoes on an island close to the mainland shore. Big Eater was powerful, but sometimes an evil ghost woman can defeat the most powerful man. One day Big Eater was looking across the water, and there on the opposite shore he saw a beautiful young woman digging clams. How could he know that she was a ghost-witch?

He hailed her across the water: "Beautiful girl, come live with me. Be my wife!" "No," she said. "Yes - No. Yes. No. Yes, yes, yes! Well, all right." Big Eater got in one of his two canoes and paddled over. The woman was even more beautiful close up. "All right, pretty one, step into the canoe." Yes, but first I must get my things." Soon the girl came back with a mortar and pestle and some eggs. She put them in the canoe, and Big Eater paddled her over. They ate. The beautiful woman said: "Oh my, what great heaps of food you can eat!" "Yes, I'm powerful that way." They went to bed. "Oh my, how often you can do it!" "Yes, I'm powerful that way." "Indeed this is so!" So they lived happily for a long time. But after a while this girl got tired of Big Eater. She thought, "He's fat, he's not young. I want a change; I want to have a younger slim man loving me. I'll leave."

So when Big Eater went out fishing in one of his canoes, the girl made a doll, large as a grown woman. She placed the doll in her bed, took her mortar, pestle, and eggs, put them in Big Eater's second canoe, and paddled off. Big Eater came home early from fishing. Thinking it was his wife he was climbing in with, he got into bed. He touched the doll, and the doll began to scream and shriek. "Wife," he said, "stop this noise or I'm going to beat you." Then he saw that it was a doll lying in bed with him. Big Eater jumped up and looked around. The mortar and pestle and eggs were gone. He ran down to the shore, got into the remaining canoe, and paddled furiously after his wife. Soon he saw her, also paddling hard.

But he was stronger than she and pulled closer and closer. He drew up behind her canoe until both almost touched. "Now I'll catch her," he thought. Then the woman threw her mortar out of the canoe over the stern. At once all the water around him turned into mortars, and Big Eater was stuck. He couldn't paddle until at last he lifted his canoe and carried it over the mortars. By the time he gained clear water again, his wife was a long way off.

Again he paddled furiously. Again he gained on her. Again he almost caught her. Then she threw her pestle over the stern, and at once the water turned into pestles. Again Big Eater was stuck, trying to paddle through this sea of pestles but unable to. He had to carry his canoe over them, and when he hit open water again, his wife was far distant. Again Big Eater drove through the water with all his strength.

Again he gained on her; again he almost caught her. Then from the stern of her canoe the woman threw the eggs out. At once the water turned into eggs, and once more Big Eater was stuck. The eggs were worse than the mortar and pestle, because Big Eater couldn't carry his canoe over them. Then he hit the eggs, smashing them one by one and cleaving a path through the gooey mess. He hit clear water, and his wife's canoe was only a dot on the horizon. Again he paddled mightily.

Slowly he gained on her again. It took a long time, but finally he was almost even with her. "This time I'll catch you!" he shouted. "You have nothing left to throw out." But his wife just laughed. She pulled out a long hair from her head, and at once it was transformed into a lance. She stood up and hurled this magic lance at Big Eater. It hit him square in the chest, piercing him through and through. Big Eater screamed loudly and fell down dead. That's what can happen to a man if he marries a ghost-witch. 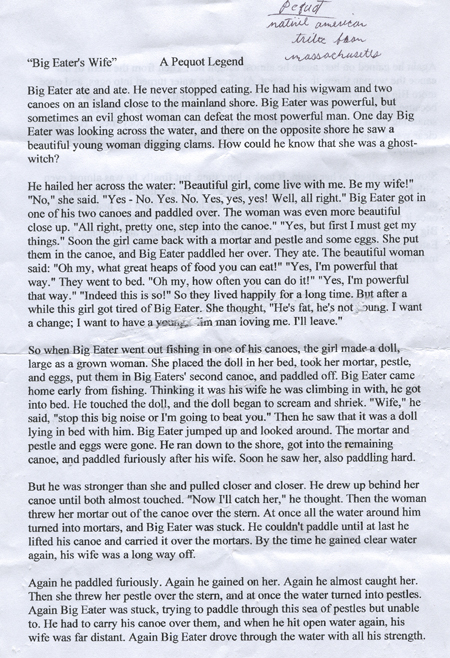 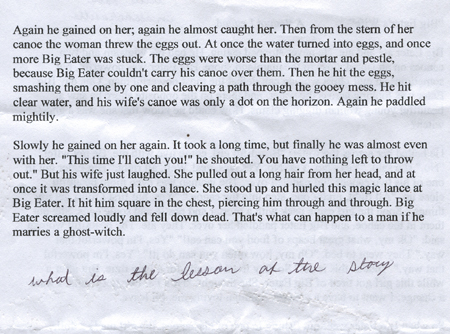 At the bottom, someone has written, "What is the lesson of the story?" I'd suggest the lesson is that sometimes society's definition of a monster and a hero are sadly twisted.

Moral:
Human behavior is often scarier than ghosts and goblins.