I must confess, I usually plan my Halloween costume months in advance, but this time I simply didn't have the opportunity. So a couple weeks before the event, I went to the Salvation Army, on an unseasonably stuffy day, and browsed the racks until I found something that sparked an idea. The process was sort of like this: "Hmm, with the right accessories, this dress could look Mod." 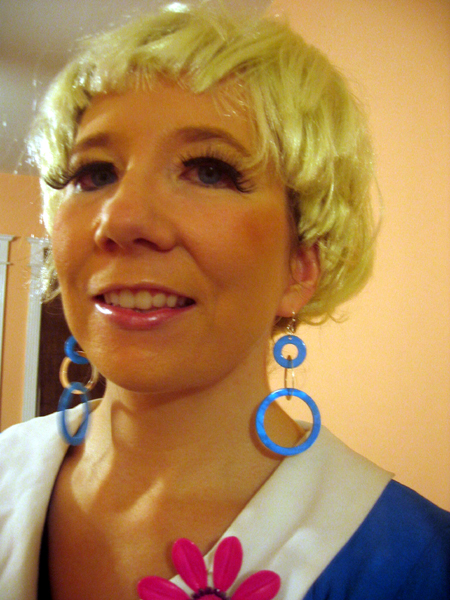 So I ordered a wig online (a Mod wig, natch), acquired a few accessories I knew I could reuse (I've been wanting a nice pair of Mary Janes), pulled out a vintage flower pin I'd snagged on an impulse at a yard sale years ago, and ta-dahhhh! Alyce, the Mod Chick!

I'd considered coming up with more of a back story, maybe carrying around a Campbell's soup can and claiming that I was one of the regulars at Andy Warhol's The Factory. But really, who wants to carry around a soup can all night?

Once I got it home, in proper lighting, I realized the dress was fairly sheer. Since I didn't have any slips that were short enough, I had to use safety pins to get one of my slips to the proper length. It was white, which means it was still a little visible, but believe me, it was better than it might have been! Here's a full-length view of the ensemble, taken in our bedroom before we attended a party Saturday at the home of Dr. DJ and The Giggler.

As we arrived, we were greeted on the front stoop by TitaniumJunky, dressed again in her Faerie Hunter costume, in tandem with The Seamstress. When she saw me, her eyes got big and she said, "I know who you are! You're Audrey from Little Shop of Horrors."

"No, but that would be a great idea," I told her, and we launched into a few lines of "Suddenly Seymour." Of course, then I'd have been wearing '50s clothes and talking in a high, squeaky voice all night. I would probably find that more amusing than my fellow party guests!

This was the first big party that Dr. DJ and his wife, The Giggler, had held at their suburban Philadelphia home, and they had quite the spread. Food was available in every room, with a larger table of goodies in certain rooms on both the first and second floors. As we made our way upstairs to deposit our Marinated Sweet Potatoes and Broccoli (which was quite popular: over half of the large container got eaten), we encountered friends in costume. Let me introduce you to a few.

Here's The Anthology Editor's Husband, dressed as G.I. Joe. This model has super Kung Fu action grip, trademark scar and even his own G.I. Joe! 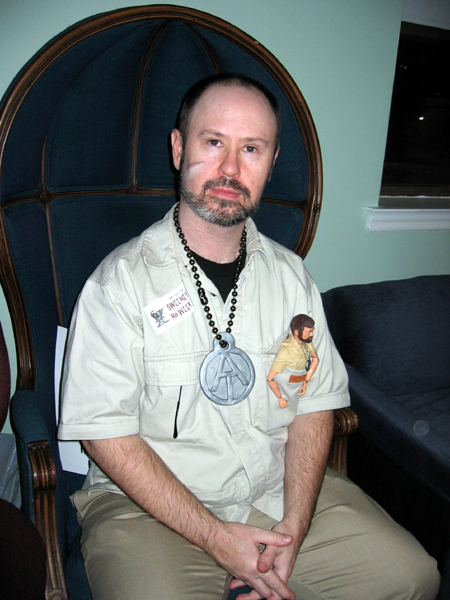 Warning: Engage your anti-pun gear before reading this next description. This is The Browncoat as the Saint of Token Jews. The costume was inspired by an experience she had earlier this year. She was at a party, and another woman, remarking on their shared heritage, said, "You're no longer the token Jew at this party." So throughout the evening, as the Saint of Token Jews, she'd come up to people, held open a little velvet purse containing gold coins and offered them "a token of my affection."

She also explained to everyone that she had refused the drab white gowns being offered in heaven: "It's got to be purple silk, dahling." Oh, and one more fun detail: She made her eye-catching Star of David bling by affixing two glittery triangles to a large gold chain that said, "Disco." Rather fabulous, if you ask me. 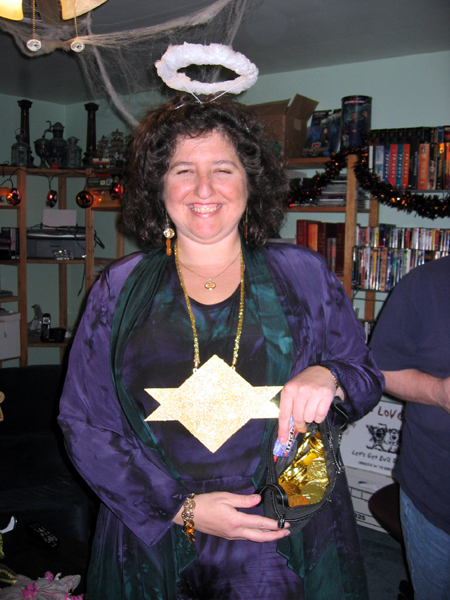 When I asked The Filmmaker if I could get a photo of him in his pirate costume, he asked me, "Sword in or out?" Of course, this was grounds for The Gryphon to jump in and say, "Please don't draw your sword at my wife." But it makes for such a cool picture! 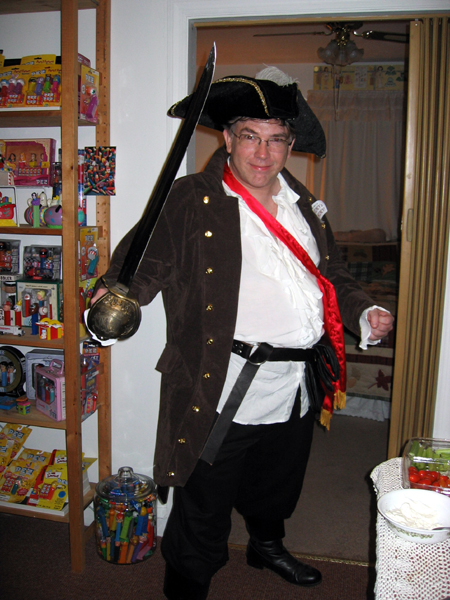 And hands down, the scariest costume at the party: your 401(k). 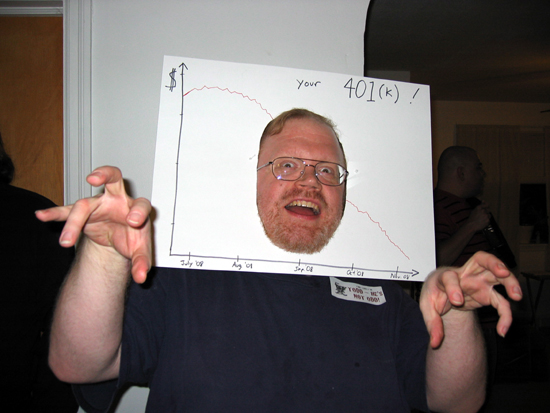 Our host, Dr. DJ, was dressed as a vampire in a wonderful brocade coat, with ruffled shirt and theater-quality teeth. His wife, The Giggler, dressed as a Red State Voter, in a plaid shirt, jeans and black T-shirt. She carried a flag, and wore a big cross necklace. My photo of her isn't that great, though, so I'll just show you Dr. DJ. 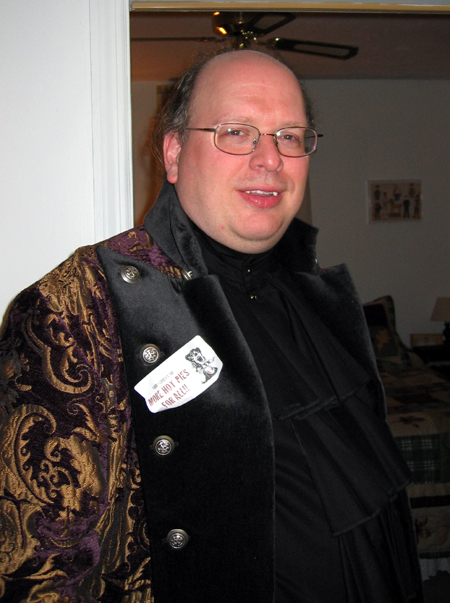 Not to be outdone, The Horror Film Buff and The Goth Grrl came in matching outfits as — what else? — goth chicks. If he doesn't object, I may share a pic or two later in the week. (Trust me, they looked great.)

Other costumed guests included a Tropical Depression (he wore Hawaiian shirt and shorts, and had a bottle marked "Prozac" around his neck), a Renaissance woman, Sweeney Todd (this was The Actor, of course; complete with a bloody razor), Doctor Benway from Naked Lunch, Megan from The Family Guy, and Princess Leia. DJ Rock went glam, with a purple tinsel wig (shiny), blue LED strands, his black letter coat, and some holographic glasses.Also attending, though not in costume, were The Green Man and his fiancee, The Linguist.

The Gryphon didn't wear a costume this year, but he did get attacked by a monster. Fortunately, he managed to fight it off. 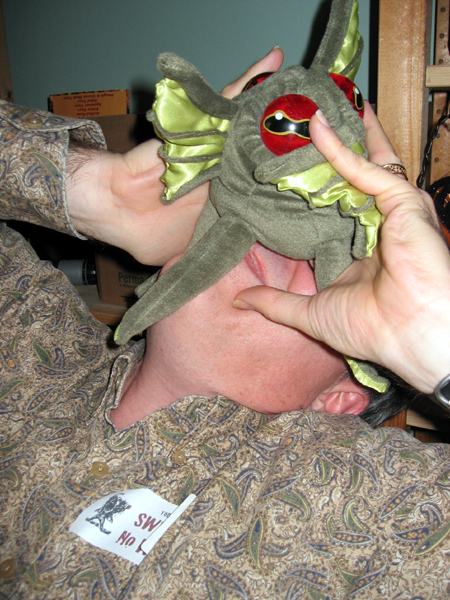 Here's proof that he still has a face. See? 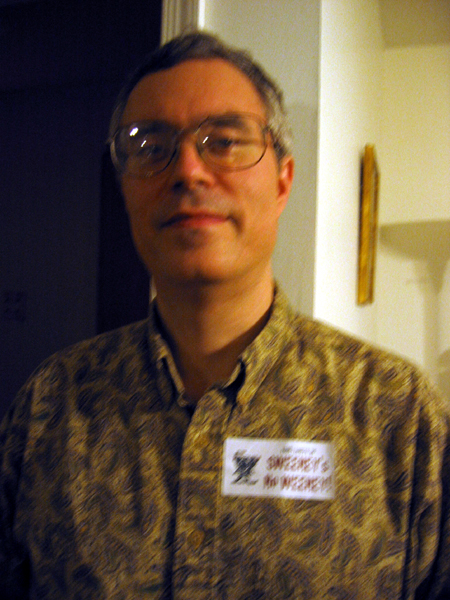 In case you're wondering about the sticker on his shirt, it was an election sticker for Sweeney Todd's write-in campaign, with his running mate, Mrs. Lovett. It reads: "Sweeney - Lovett: Sweeney's no Weeney!" (Misspelling intentional, fellow English geeks.) 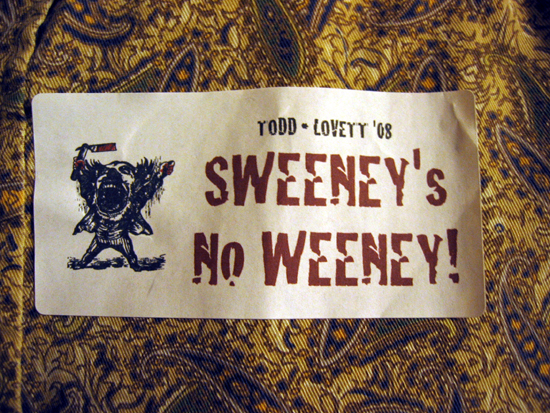 I sampled some of the delicious (and potent) punch provided by TitaniumJunky and made my rounds of the rooms, taking pics (as if that's not obvious) and engaging in conversation. I met a woman who works at a Renaissance Faire but was not in costume (which I suppose, is sort of a costume for her). We met in the laundry room where the drinks were kept and had a great discussion about men who dress up as women for Halloween. We agreed it's their way of showing their feminine side. Those who are more secure about their feminine sides actually try to look pretty; while those who aren't as secure, deliberately make themselves look bad — polyester muumuus and unshaved legs, with overstuffed fake boobs and ratty wigs.

The two of us went looking for sodas together, and that's where I spotted Sweeney Todd's razor. I tried to get The Actor to pose in his complete costume for me, but then The Horror Film Buff snagged the razor and began chopping off heads. I never did get back to the Sweeney Todd photo. (Sorry!)

One friend in costume (as Megan from Family Guy) looked so different I had trouble telling who she was. She had the same experience with me. We were staring at each other, like, "Who is that?" It didn't help that I'd just put in eye drops and couldn't see that well. Then simultaneously, we recognized each other, and squealed, much to the dismay of The Horror Film Buff, who was nearby at the time. 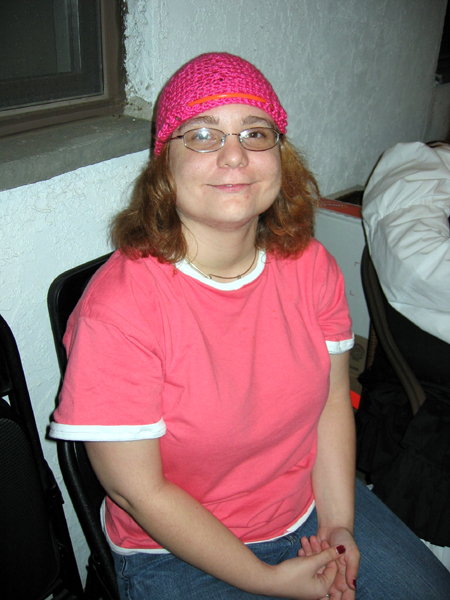 I moved upstairs then, where The Gryphon was hanging out with some people. Our host and hostess asked if we'd mind if they got a session of Rock Band going, and we told them to go ahead. Before we knew it, the whole room was rocking. They have a good selection of songs: lots of rock and New Wave songs that I actually know, unlike when we played before with someone who had mostly metal and alternative.

I took the mic as vocalist for several songs and got big laughs for my improvising during a Psychedelic Furs song. In the part where he was talking, I just started saying things like, "I've got great hair and you love me because I'm all British and stuff." Everyone laughed and applauded. There was no way to top that, so I handed off the mic.

Still, I stuck around to play bass on a couple of tunes (on the easy level, baby). The Filmmaker recorded one song in its entirety on video, with DJ Rock on vocals. If he posts it anywhere later, I'll share the link. We brought down the house, and I'm told we even looked cool, too.

Then, since The Green Man had brought a real guitar, I joined him in a side room with a couple people to page through his big blue fake book and have a little sing-a-long. He had a nice range of classics, including some of my favorites, such as "Space Oddity" by David Bowie. He even had "Secret Agent Man." 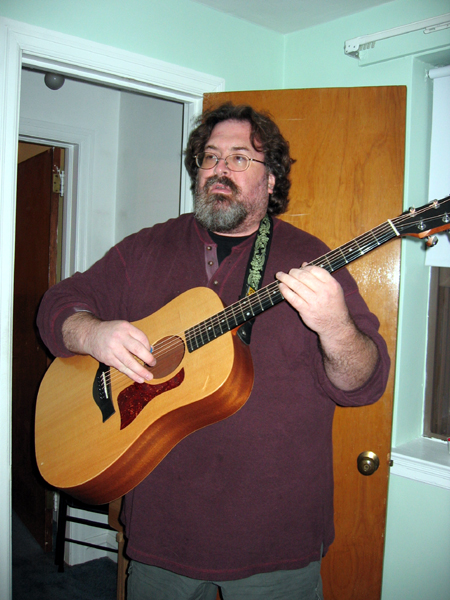 The room wasn't ideal, though, because we were right next to the room where they were playing Rock Band, and it was hard to hear. I went downstairs, made some inquiries, and found out no one minded if we took over the living room. This was a better place, because the chairs were more comfortable, too. We had several people singing along, including the Renaissance Woman, Dr. Benway, and a woman in a costume from a Neil Gaiman novel.

The Giggler's mother, who was sitting in the corner, told me at one point that I have a nice voice. I just smiled and told her, "I make up for a lack of talent by being loud." Truly, The Linguist is a much better vocalist, but she was busy socializing with other people on the back porch and didn't join us. It's a shame: I'd love to hear her sing in person sometime; I've only ever seen her perform on videotape.

I was having such a great time I completely lost track of time, but at about 12:30, The Gryphon found me and we said our good-byes. We might have stayed longer, but we had about 45 minutes of driving to do and a very patient doggie and kitty waiting at home. No doubt, they were sitting up on the couch, fretting, their hair in rollers, awaiting our return.