I made it to the gym this week for the first time in about a month. I've been walking the dog and doing aerobic exercise (mainly playing DDR) at home, but I haven't been doing any weight lifting in that time. I had many good reasons. 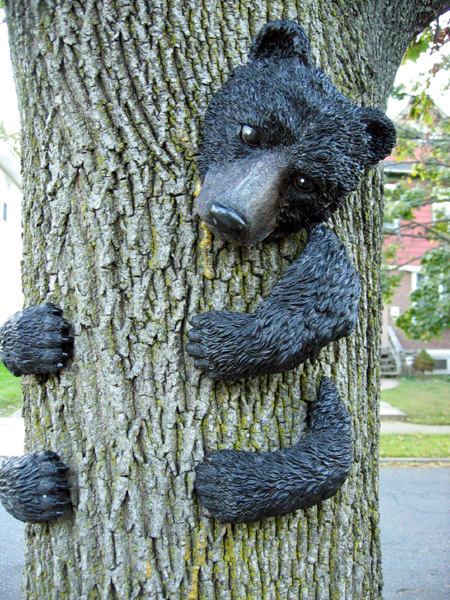 A tree ornament of a bear, photographed recently

First, I got sick, and my cold held on for a week and a half. Not only did I lack the energy to lift but was afraid I'd spread the sickness to others.

Then, in the final days of the election season, I had a lot of extra work and was staying up late and sleeping in. Last week, I had some unrelated scheduling difficulties, as well.

When I do my lifting, I often see my former belly-dancing instructor in the gym. I would still be taking her class if my schedule didn't conflict, but sadly, it does. She takes an aerobics class and then finds a mat in the fitness center and does stretching exercises.

When I saw her, she greeted me and asked me how I'd been. I ran through my saga and then told her I was going to go use the machines in the other room. After I'd done a few reps, it occurred to me I hadn't asked her how she was doing, so I walked past her mat and asked her what was new.

She said, "Nothing much." Then she told me something that really shocked me. Apparently, she'd hadn't been to the gym in three weeks either, but for a vastly different reason. She'd fallen off a horse!

She told me that she used to ride all the time and only recently started up again with lessons. During her lesson, she fell off the horse and, fortunately, suffered nothing but muscle injuries, although she says visions of Christopher Reeves flew through her head in the moments afterwards.

When it first happened, she couldn't teach her belly-dancing classes. In fact, she could barely move, even to dial a phone. For the past few weeks, she'd been working to regain her usual mobility. I was flabbergasted. Here I'd been complaining about things like having a cold, and in the meantime, she'd been fighting a much bigger problem.

But she seemed optimistic and said her flexibility was returning. I suggested she speak to a friend of hers. This belly dancer had survived a traumatic car crash several years ago and had managed to rehabilitate herself to the point where she's teaching and performing again. If you didn't know she'd had such an accident, you would never guess.

As I returned to my workout, I felt a renewed appreciation for how easy it was simply to walk and to pull down a metal bar. The muscle burn felt good. This experience will make me think twice when I want to complain about my own ups and downs in life.