Wednesday a week ago, we drove to Central Pennsylvania to celebrate Thanksgiving with my family. It promised to be a big get-together, because my brother's family was coming from Vermont and my sister and her husband from Virginia, as well as family friend The Pastor and her two sons.

The Pastor's Oldest Son stayed at our place the night before, since he'd flown into Philly from Colorado, where he works for a company that develops flight simulators. He told us a story once about how he was looking through some graphics for said company while on a flight, attracting suspicious looks. 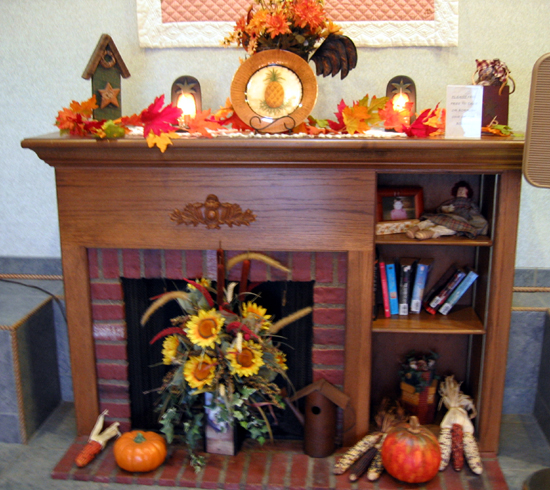 Thanksgiving display in the Comfort Inn

The Gryphon had to work a half day on Wednesday, so I used the time to pack and make final arrangements, such as leaving money for the cat sitter and scooping the litter.

On the way to pick up The Gryphon, I realized I'd forgotten to pack the lap desk for his laptop. This was a problem, because I would be working from my Dad's place and had been counting on doing most of it from The Gryphon's laptop. This way I wouldn't have to work in my sister's former office, downstairs, where she and her husband planned to sleep. In fact, we'd reminded her husband to bring his wireless router for that purpose.

So when I called The Gryphon from the parking lot to tell him we had arrived, he agreed that we should stop at IKEA and get another one. While we waited, some groundskeepers were engaged in a mysteriously complex procedure involving fallen leaves. One of them used a handheld leaf blower to corral them into a pile. Then another one drove up on a large riding lawnmower and ran over the leaves, which only blew them back on the sidewalk. He ran back over the remaining leaves, apparently in an attempt to render them so small as to be nonexistent. Instead, they ended up with a still-visible pile of shredded leaves. I suggested they had developed this system in order to make sure they could take the maximum time possible and thus claim they'd worked a full eight hours.

This scene greatly amused The Pastor's Oldest Son and I, but it upset Una, who kept barking at them every time they passed the car. I had to pull into another spot, so she'd stop.

At IKEA, the plan was for me to use the restroom and then proceed to the checkout area, while the guys would grab the lap desk. This seemed a good plan, but it took longer than expected to find the lap desk, which was only available in the showroom. Sometimes I think IKEA does this just so you're forced to wander through the store, with hopes that you'll pick up some other impulse items along the way.

While I waited, I bought us all water bottles and did some people watching. A little boy was throwing a temper tantrum, and when his stepfather pleaded with him to stop, he said, "You're not my father" and then called him a fat pig. Never too early for a little holiday spirit.

Finally, they emerged, and we got back on the road. Una was relieved, because she probably thought she was going to be attacked by men with leaf blowers at any time.

Our trip was uneventful, with a couple stops at rest areas along the way. At one, I grabbed a hamburger for Una, who hadn't eaten much that morning. While it got chillier as we drove, we didn't run into any weather or traffic difficulties.

The first thing we did upon arriving was check in at the pet-friendly Comfort Inn where The Gryphon and I were staying. He took care of it while the rest of us waited in the car, Una with her ears up, looking for leaf blowers. Then we took a couple of our bags to the room and stopped again at the front desk to pick up a wireless booster, which the hotel staff assured us would make it possible to work from there, should I need to.

Then we drove to my Mom's place, where The Pastor was helping Mom get ready for the Thanksgiving feast. Mom had agreed to take Una during the day, since my young nephew and niece would be staying at Dad's place. We weren't sure how they'd deal with a strange dog, especially since my nephew was recently attacked by a dog that wondered into his back yard.

We spoke to Mom for a short while and arranged to pick up Una at 10, then headed for Dad's. He was out picking up some pizzas he'd ordered for dinner, but in the meantime my brother and his family had arrived. My sister and her husband were still in transit.

As we walked upstairs, I could hear familiar voices. When I entered the living room, my brother and his wife exclaimed, "It's Aunt Alyce!" My little nephew, now 3 1/2, ran up to us and gave us hugs and kisses. I was so happy he did this because it has been more than a year since I saw him at our wedding. He'd been extremely shy that day, probably due to the strange situation, and he had hid from me when I tried to hug him in my fancy wedding dress.

Then my niece ran up to do likewise. The last time I saw her, she was crawling around on the floor, gurgling happy baby noises, having just turned 1. Now she's 2, with elfin-looking ears poking out from beneath her long, chestnut hair.

While my nephew can now engage in simple conversation, rather than simply laughing at my silliness, as he used to do, my niece was more interested that night in communicating a particular communiqué. That is, her desire to find my Dad's cat, Mia, who was wisely hiding. You could be talking to my niece about anything, from dinner to her dolly, and it seemed as if she was listening. Then, she would look at you, with wide eyes, and utter, with a reverence one reserves for the sacred, her one undying quest: "Kitty."

My Dad joined us soon with a variety of pizzas, which hit the spot. More importantly, it was easy, casual and would make terrific leftovers for late-arriving guests. We took slices and chatted, catching up.

Afterwards, my Brother's Wife, The Gryphon and I stopped at the drug store and then at a local bar where we picked up two six-packs of Yuengling lager.

Since my sister and her husband hadn't arrived at the time I had to start my evening work, I did my first assignment from my sister's former office. She had converted a storage room into an office, with desk and couch, which she had used while working as a certified massage therapist about 10 years ago. Since then, my Dad has installed his own personal computer on the desk. The couch, which is a fold-out couch, is convenient for sleeping when my sister and her husband visit, since it's away from the allergy-producing — dare I say it? or will I profane the sacred name? — kitty.

For that first hour or so, I felt a bit left out, as always. My Dad's apartment is on the second floor of the building, with the first floor consisting of his medical practice and the basement and back portion of the first floor as rented apartments. I can always hear people walking up and down the stairs to go out to their cars, catch snippets of laughter when they open the door. But I always feel lonely and isolated. I was looking forward to working upstairs where, even wearing noise-cancelling headphones, I'd feel more included.

My sister and her husband arrived while I finished my first assignment. During a short break, we got the wireless router connected so I could finish upstairs.

My brother and his wife put the kids to bed at their normal time and socialized for a few more hours before turning in. I worked on a couch and was distressed to learn the main news of the day: the terror attacks in Mumbai, India. Not only were people in terrible danger, but I feared, selfishly, that the breaking news would alter the holiday schedules of the cable news channels which I transcribe for a living. That first night, however, it didn't affect my usual schedule, though I did have to work later than normal.

It always takes longer when I'm working from someone else's computer, and the additional distractions of being in a room full of people also slowed me down. We didn't head back to the hotel until about 2:30 a.m.

When we arrived, there was a hush over the hotel. This was the first time Una would see our room, which in retrospect might have been a mistake. Still, I don't know how much it might have helped to introduce her to the space earlier. She was nervous, as she always is, with new situations. As we entered a side door using our key, she sniffed everything, turning her head side to side to hear all the noises.

In our hotel room, she seemed both curious and a bit panicked, wondering around the hotel room, doing a security check as we got ready for bed. 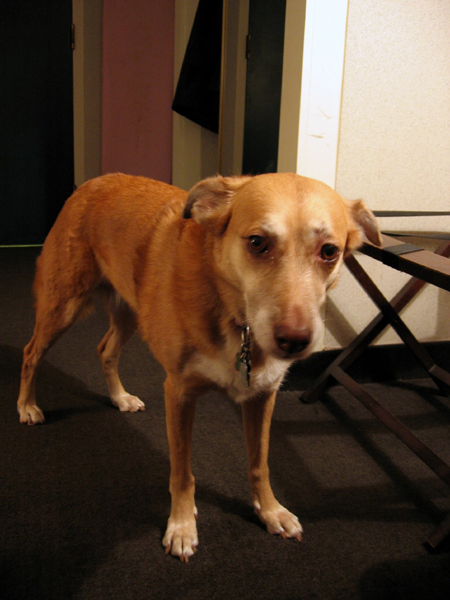 We had learned from taking Una to a hotel before that she probably would react to every noise in the hallway. The best way to prevent this was to turn on the radio to drown out some of the sounds. I scanned the dial for a station that would play mellow music with few jarring commercials. The local Muzak station was playing orchestral music with loud timpanis and crashing cymbals. Plus, their announcer had a voice I found less than soothing. After trying out other possibilities, I settled on the local Christian station, playing wall-to-wall soft rock (Christian rock, of course). Instead of DJ exposures and loud commercials, it primarily played Bible passages.

To make her even less likely to bark, we allowed Una to lie between us so that she felt secure. We drifted off to the strains of Christian pop. Una was good throughout most of the night but barked once or twice in the early morning as people began moving in the hallways. Una might have ignored them, but according to her logic, this was our new home and even though we'd chosen to stay in only one room of it, they were intruders. And for all she knew, they might have leaf blowers.