Last Friday, my husband, The Gryphon, and I woke up and, once more, took turns going to the continental breakfast at our hotel. We had discovered the only creamer for the coffee consisted of cartons of skim milk, so we agreed to share one, with one person bringing half back for the other.

The same little boy I'd seen at breakfast the day before was running around the room, shooting at things with an imaginary gun while his guardians ate quietly. I wondered if he was like that all day yesterday at Thanksgiving or whether he was releasing pent-up energy after having to behave at Grandma's house. 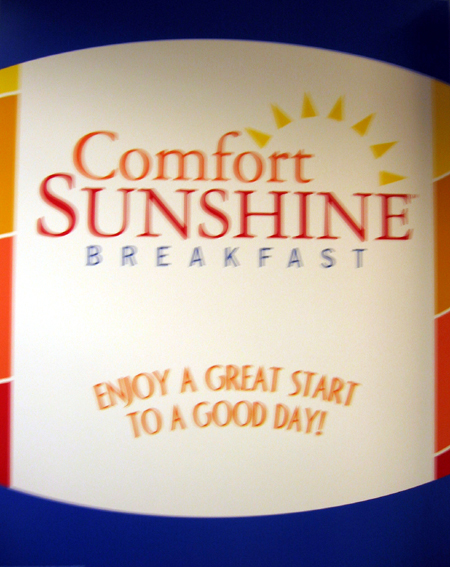 When we were ready, we drove to Mom's place to drop off our doggie, Una. While we were there, we talked about dinner plans. Just in case there wasn't enough left over from Thanksgiving, she gave us some pre-baked frozen casseroles to take for later. Mom has two full-sized freezers, and she likes to buy food in bulk, at a discount, then prepare it and freeze it, which saves on both money and time.

Before I started my afternoon assignment, I walked with my sister and my brother's wife to the local drug store to pick up a couple things. They were having ridiculous sales, probably in honor of Black Friday. My sister and my brother's wife took advantage of the sales. The only thing I wanted was a massage pad you could put on a chair, but it was still $90 plus tax even on sale. I couldn't justify buying it on the spur of the moment.

My sister had spoken to everyone last week about the possibility of taking a group shot on Saturday, since we were all in town. We agreed that after I completed my afternoon assignment, we would scout locations with my mom and my brother's wife. When I finished my assignment, though, the children were still taking their afternoon naps, so my sister, Mom and I went, taking sample pictures to share with my brother's wife later.

First, we stopped at the nearby state park, which had been my sister's first choice. Walking through the park, we found a couple picnic tables next to the soccer field, which we thought could be good for the large group. I took pictures of my sister at each site, with space around her to give an idea of how you might frame it with the entire group. 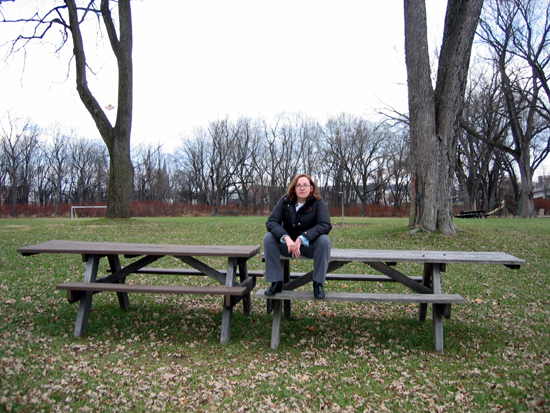 Nearby, we stopped at a gravel road in a grove of trees. We liked this site, which we felt would work if we brought a couple chairs from my Dad's office. That way we could easily have two or more rows. My sister got a little silly with this pose. 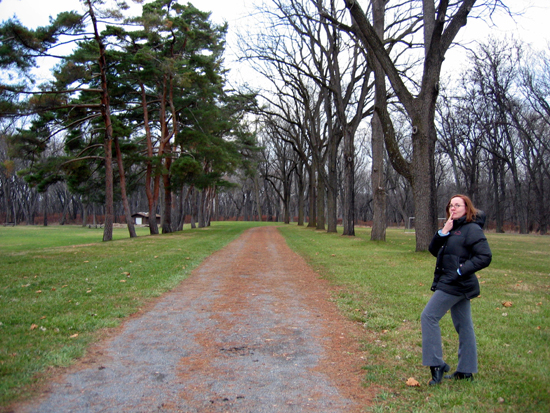 We looked around for other possible locations, but some of the places we remembered were gone. They'd long since torn down the wooden playground we used to frequent as children, which had fallen victim to multiple floods. Also, a circular, multilevel concrete area once intended as a garden but which hadn't been maintained in decades, has also been removed. I believe they did this to discourage skateboarders, who loved it.

Towards the river, we found a fallen tree limb that might have made for an interesting shot for a small group. Unfortunately, it was right in front of a severe slope, so you couldn't have had more than one row of people. Plus, it might be a bad place to bring the kids. 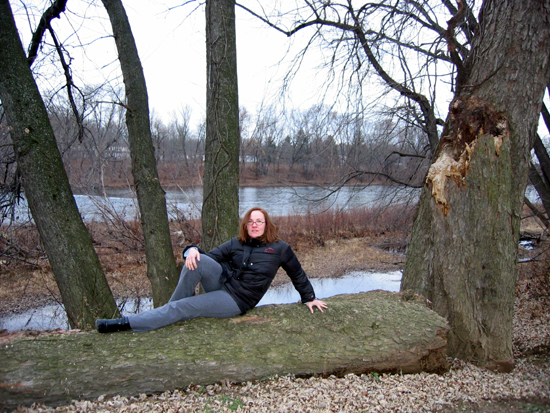 We liked another grove of trees nearby, but in the background you could see the concrete bridge that spans the river. We decided this was therefore not the best location, even though we loved the trees and the bed of fallen leaves. 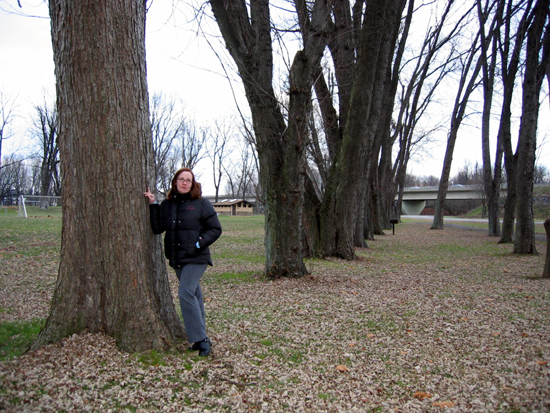 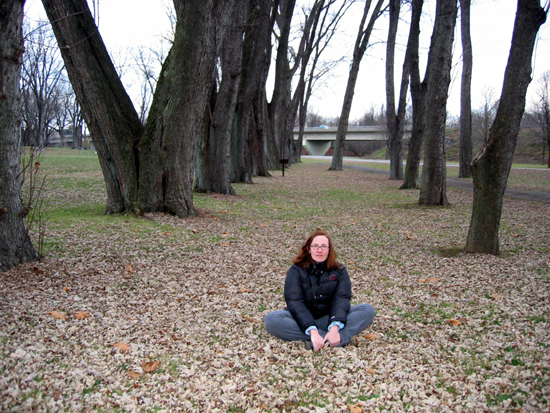 Mom had to go to a hair appointment, but my sister and I wanted to check out a couple more sites before we lost all the light. We drove to another small park in a neighboring town where, about a decade ago, I'd had engagement pics taken with The Seeker, my first husband. It had been a long time, and I couldn't remember exactly where we'd taken the shots, except that there were multiple possibilities.

As we discovered, that particular park was better suited for shots of one or two people. We didn't find much that would lend itself to pictures of a group. We found a very nice stone wall, covered in moss, but we found trouble imagining a baker's dozen of people in front of it. 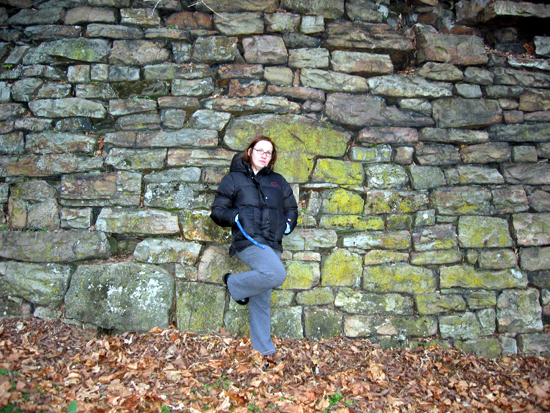 We also discovered a stone ruin, once a functional building. Where various blocks were missing, you could have seated numerous people. The problem, we realized, was that the background was unremarkable, consisting mainly of houses. 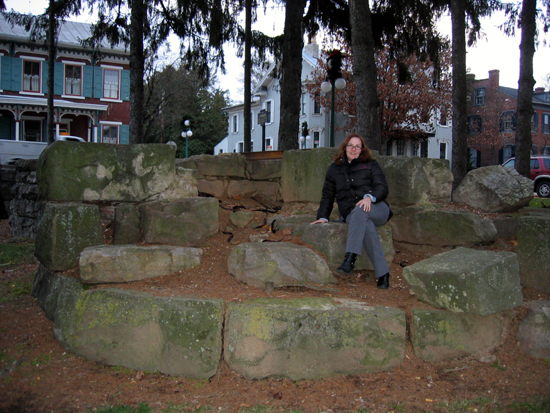 Finally, we stopped at another small park in the same town to scope out an area where they'd added brick bleachers for concerts and events. But after getting out of the car to look, we didn't even take a picture. We realized that, aside from the fact that you could seat people in rows, the location wasn't interesting.

As dinnertime neared, a cadre of people heated up the leftovers and dethawed and baked the casserole. Meantime, I played with my niece and nephew. My niece had brought three dolls: a regular-sized baby doll, a miniature baby doll, and a Barbie-sized Snow White. She was quite willing to play with me, handing me the Snow White doll and allowing me to make her talk and move around. But when her brother wanted to join us, taking the third unclaimed doll, she began to cry.

I suggested that we all take a doll and play together, convincing her it would be fun. She seemed content with this idea at first, and the three of us played together nicely. My nephew cradled the largest baby in his arms, making it cry until the Snow White doll comforted her (a difficult task, since the baby was five times her size), then gave her a "bottle," which was a piece of plastic from the spinning toy, which had been disassembled.

Then my niece's miniature baby doll cried, and Snow White gave her a bottle, too. My niece bored of this, though, and traded the Snow White doll with me for the miniature baby doll. Her Snow White had a different idea of how to take care of babies: throw them on the floor and laugh. This is why you should never let a 2-year-old babysit.

Everything was pleasant for about 10 or 15 minutes, until my niece remembered that her brother was playing with her toy. She started crying, trying to grab the baby doll from him, while he resisted. Everybody turned to look. If you had seen nothing but that moment, you might have assumed that my nephew swiped the baby doll from my happily occupied niece, making her cry. I told my nephew to let her have it. "She doesn't understand," I told him. "Sometimes you just have to be nice to your little sister." He let her take it back.

Immediately, I explained to my brother and his wife that my nephew was not to blame, that we'd all been playing very nicely until she demanded her toy back. I'm told the kids have this sort of disagreement all the time, which is to be expected at their ages. Hopefully, as they grow older, they'll have an easier time understanding such concepts as sharing. After all, for about 10 to 15 minutes, they had done a very good job.

When I was little, I loved my brother in a sort of patronizing, older sister way. When he was 4 and I was 6, I remember walking through a parking lot together. I announced to him that I wasn't going to call him "cute" anymore now that we had a younger sibling arriving.

As slightly older children, we sometimes played together with gender-neutral toys like Legos, blocks and Fisher-Price people. But even in those days, our worlds were largely separate: his of bugs and Matchbox cars, mine of Barbie dolls and books. It wasn't until our cognitive skills developed that we found we shared many interests, such as music and humor, and we became very good friends in our teenage years, continuing to today.

Dinner was delicious, if a bit of a reprise. We each were careful to go easy on serving sizes the first-time through, and we all got plenty.

After the kids went to bed, my father's cat, Mia, who had been hiding from the children, made her presence known. Normally, she's a very affectionate cat and enjoys having her belly and her ears rubbed. It must have driven her crazy, hearing all those people but being afraid to show herself.

She rushed up to us, mewing, as if to say, "Pet me now before they wake up!" We took turns petting her, but nothing was enough. She kept mewing and demanding attention. "More! More! I've got to store up before I go into hiding again!"

I wished I could have just relaxed and petted Mia, but I had work to do. Even though I finished earlier than the previous two nights, I still was the last one awake in Dad's living room.

Moral:
Cats can only go so long without being petted.