Before I write about this past weekend, I'd like to finish writing about our Thanksgiving vacation. On our last full day there, Saturday, I didn't have to do any work and could hang out with my family the last day. 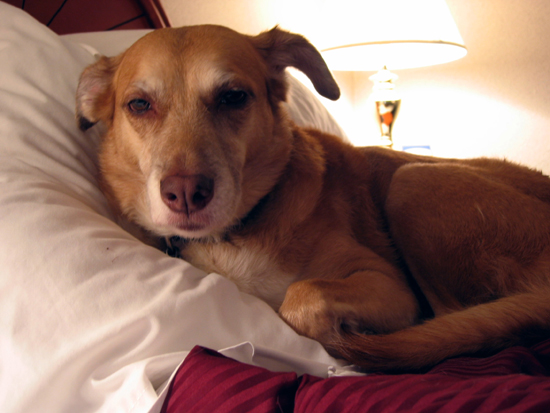 Una relaxes in the Comfort Inn

My husband, The Gryphon and I got up and had a complimentary continental breakfast, then called my sister to tell her we'd be at Dad's by about noon if she, her husband and my brother's family wanted to go to lunch with us.

The Gryphon and I had a couple errands to run. First, we stopped at a pet store I used to frequent when I lived in the area. Una needed something to soothe an itchy belly. She was having some sort of allergic reaction. Whether it was from something she encountered at Mom's place during the day or whether it was from something in the hotel, it was impossible to tell, but we needed something to treat it. We'd left behind the hydrocortisone spray we usually only need to use during the high-allergen season of early fall, so I went inside seeking some spray.

They didn't have any but even better, they had an anti-itch cream. I immediately knew this would address one of the problems with the spray. Since Una associates spray bottles with punishment, it was often difficult to get her to submit to having her belly sprayed with hydrocortisone. The cream, I knew, would be easier to administer.

Our next stop was at the local wine and spirits shop so that The Gryphon could pick up some wine for a wine sauce he planned to make that evening, plus a couple extra for people to drink. While he was inside, I smoothed some of the anti-itch cream on Una's belly. She licked my hand gently, as if to say, "Thanks!" Then, since we happened to be sitting in front of another pet store, I pointed to the puppies in the window, which she watched with rapt interest until The Gryphon returned.

By the time we'd dropped Una off at my Mom's place and driven to my Dad's apartment, it was nearly noon. My sister was busy drawing with my niece, who is definitely a little artist. 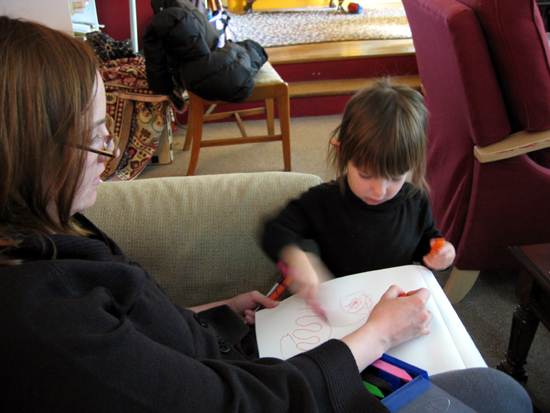 We found out there was a slight change in plans. My brother and his family decided not to join us for lunch in order to wait for a friend of theirs who was expected to visit. She also lives in Central Pennsylvania, about two hours away, and they rarely see her now that they live in Vermont.

My sister and her husband, The Gryphon and I, and the Pastor's Eldest Son drove to a coffee shop that's the favorite place for The Gryphon and I to visit for lunch. It was nice to get out of the house for a little bit. It can be difficult sometimes to take such excursions when there are so many people involved. The five of us ate our soup and sandwiches and enjoyed our coffee drinks, then headed back to Dad's place.

The plan had been to gather everyone for a group photo when my Dad finished his afternoon rounds, but he surprised us all by finishing them an hour early. Since my niece and nephew were napping and my the friend of my brother and his wife had arrived, my sister and I agreed to give it a little time.

While we waited, their friend popped a tape into the VCR. She'd recorded the Stephen Colbert Christmas Special. Everyone loved it, and I was glad to see it again, since the last time I'd seen it, I'd had to divide my attention.

As the special ended, my sister and I mobilized our husbands and Dad to get ready for the photo. My brother asked me when we were going to do it, and I told him we were just waiting for the kids to get up. I guess he didn't realize that's what we were waiting for, thinking that we were waiting for Mom to arrive. We'd arranged, though, to call Mom when we were ready so she could meet us at the state park. With that confusion settled, my brother and his wife got my niece and nephew ready, and we all drove to the state park for the group photo.

I'm really glad my sister and I scouted locations the day before, because we knew exactly where to head. We took a couple chairs from my Dad's office, and I brought along my tripod, to which my brother's wife attached her professional-quality camera. Everyone was in good spirits as we got ready for the shoot. 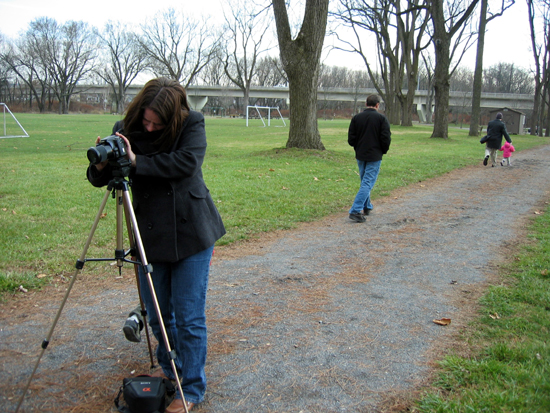 My niece and nephew loved being surrounded by all the green space and did a little supervised exploration until we were ready. My sister and my brother's wife had arranged for everyone to wear black, so that we would look more unified. Right before the picture, those of us who were wearing jackets that were another color tossed them to the side, out of frame, and my brother's wife took several photos, using the timer.

The kids were extremely well behaved, which I credit in part to their sweet natures and in part because they're used to such photos. Since their mom is a photographer, they've taken photos before with a camera on a timer, and they know to look at the camera instead of at everyone around them.

My brother's wife will be adjusting them in PhotoShop before sharing them.

Since The Gryphon and I had volunteered to cook dinner, we drove to the grocery store while nearly everyone else headed for the swing sets in the state park. We knew we had a lot of people joining us, so we made pasta, which we knew we could make go far by adding sauteed vegetables and chicken. The Gryphon also got makings for a white wine sauce. We'd already spoken to my brother, and he said that since the kids were picky about what they ate, not to worry about making something for them. He'd provide their food.

While we were in the grocery store, I called to confirm this, because if he needed us to pick up something for the kids, I wanted to know. He told me that his family had decided to go to Taco Bell with their friend. I knew that's where they'd wanted to go for lunch that aftrernoon, and I also figured they wanted to spend some time alone with their friend, so I told him cheerily that would be fine. My brother promised to try a little of our food later.

We still bought just as much as we'd been planning, figuring that people could eat the leftovers for lunch. the total bill came to just north of $60, but when you consider that we'd enjoyed free breakfasts throughout our trip, with lunches and dinners provided by our family, that only seemed fair.

Back at Dad's, we got into cooking mode. I was the prep cook while The Gryphon called the shots and prepared the chicken. I was quite happy to chop up vegetables to his specifications or whatever else he needed. The Gryphon loves to cook, and his enthusiasm is contagious.

We also heated up some frozen beef vegetable soup Mom had given us, as well as some squash soup (since I don't eat red meat). There was a little confusion: there were two containers, but we only heated up one, which wasn't enough. We dethawed the second bowl, though, while people served themselves pasta.

Everyone moved into the living room to watch WALL-E, which they'd rented, so that they could get through it before the kids had to go to bed. The kids really loved the movie. My niece kept saying, "Poor WALL-E." My brother laughed and said he'd be sure to be hearing that phrase for weeks to come. 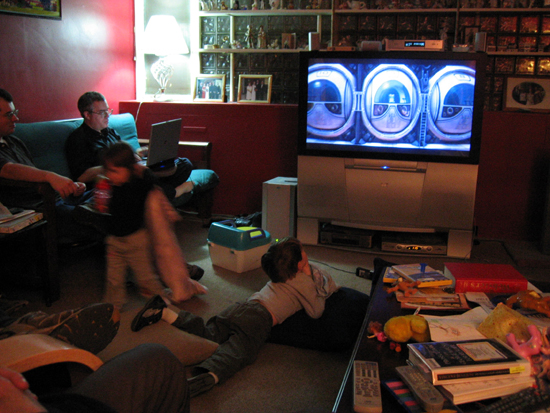 After the kids went to bed, instead of watching the second movie, Tropic Thunder, right away, we spent some time talking. We did, after all, have a guest. When we were growing up, it was understood that you turned the TV off when guests visited. This used to bother me when my parent's friends would drop in unannounced, if we were in the middle of one of my favorite shows.

But I hadn't seen this friend for ages, so I would rather speak to her than tune into another movie right then. After she left for home, my brother and his wife turned in while the rest of us watched Tropic Thunder. We turned the sound way down but put on the subtitles so we wouldn't miss any dialogue. The great thing about this was picking up on some of the terrific lines said by Robert Downey Jr's character, which I'd missed the first time around.

We said most of our good-byes that night, because we knew we wouldn't stop by Dad's the next day. On Sunday, we stopped by Mom's, where we met up with The Pastor's Eldest Son, who was getting a ride with us back to Philly, in order to catch his flight.

The return trip was uneventful, considering that we woke up to a dusting of snow. Fortunately for those of us driving south, namely my sister and I, the snow turned into rain. While it was persistent and did impede visibility, it wasn't heavy enough to result in hydroplaning or other problems.

Back in Philly, we dropped Una at home and grabbed an early dinner before dropping The Pastor's Eldest Son at the airport. First, we tried Nifty Fifties, a cool retro diner, but the line was incredibly long so we opted for Charlie Brown's steakhouse instead. There, we were seated within about five minutes.

The dinner conversation revolved mainly around computers, since it's an interest the Pastor's Eldest Son shares with The Gryphon. I tried to keep up, though most of it was above my pay grade. Then, we headed for the airport. The only frustrating part was all the congestion of cars dropping off people at the various terminals. We got The Pastor's Eldest Son to his plane in plenty of time, then returned home to our itchy doggie and lonesome kitty.

Moral:
It's a good idea to make sure that all members of the party are aware of the plans.