Where the Lights are Bright

In part one of the New York adventures of My College Roommate, The World Traveler and me, I talked about our exploration of Central Park. As we left the park, we headed for the high-end shops on Fifth Avenue, which were decorated for the holiday season in extravagant fashion. 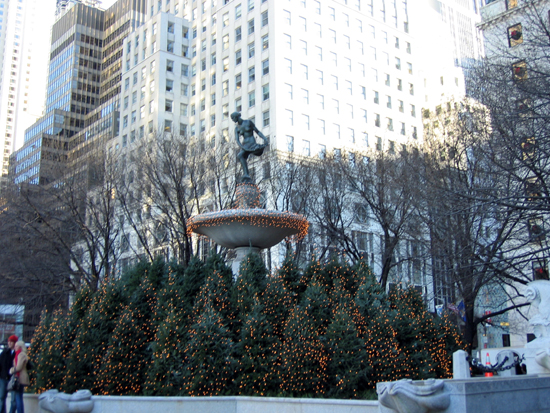 Our first priority, though, was to find a restroom, thanks to the three cups of coffee and a mimosa I'd had for brunch. The World Traveler, a New York resident, suggested we try the first store, Bergdorf's.

As we walked towards it, we passed the famous Plaza Hotel, where Heloise of the children's books lived. Across from it, a fountain had been converted into a Christmas tree display, which I stopped to photograph.

Bergdorf's was decorated everywhere with tasteful white decorations, frosted as if the interior was a winter wonderland which happened to be crammed with designer handbags and jewelry. We immediately found ourselves amongst well-dressed shoppers and equally well-dressed staff. The World Traveler asked for directions to the restrooms, and we learned they were downstairs in the perfume department.

As we rode down on the escalators, I felt like an intruder in an exclusive land, sure to be tossed out at any second. Walking past the perfume counter was like running the gauntlet, not making any eye contact. When I violated this principle, immediately the salesperson asked me if she could help me. No help please. Nothing to see here.

Inside the spacious bathroom, lined with mirrors and soft lighting, I relaxed. I was hit with a funny realization which I then checked with The World Traveler. "So, do you think this is bigger than your apartment?"

She thought about it. "Actually, I think it might be."

Then we were dashing back through the perfume level, which was making me dizzy. Or perhaps it was New York itself. The last time I visited, I suffered from a headache the whole time, and only one of those mornings could have been blamed on drinking.

The World Traveler told us that her plan was to take us to see the fancy shop windows on Fifth Avenue. The first ones we saw, of course, were Bergdorf's. Just like inside, the display windows were an exquisite winter wonderland, although several of them also represented the other seasons, also in white. 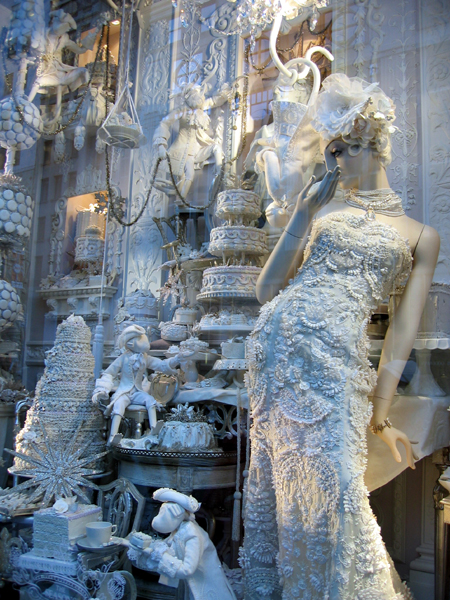 "Let me throw up to make more room for cake." (on Photobucket) 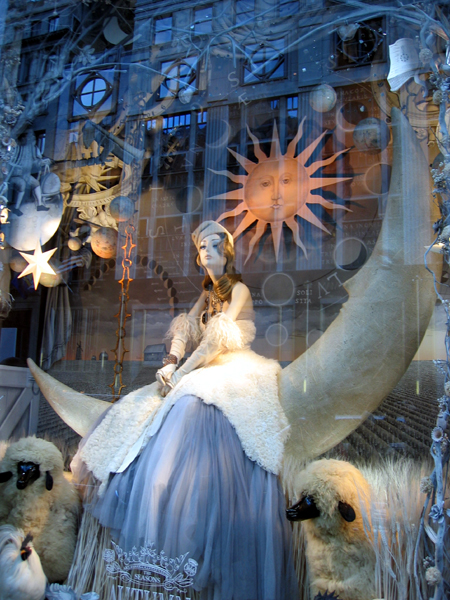 "Being a Moon Princess is soooo boring." (on Photobucket) 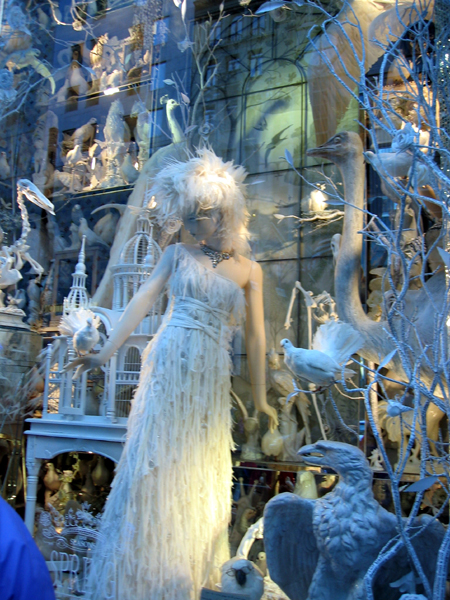 "My hair is a birds' nest, darling." (on Photobucket)

We came across some other interesting decorations, such as the Louis Vuitton store, which was sporting a clear false front, decorated with its colorful characteristic symbols. It looked almost like a giant handbag. 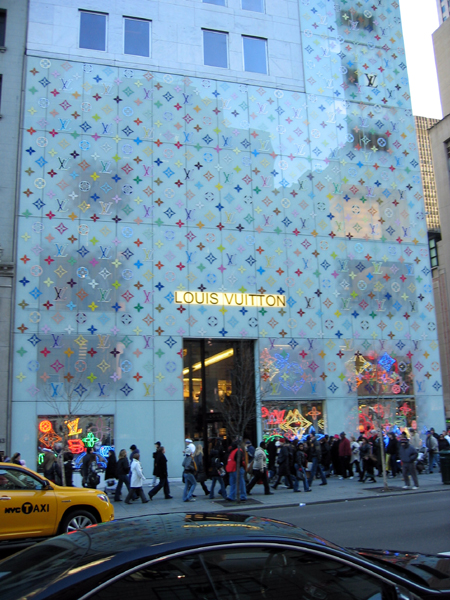 Then we spotted a very familiar building: Trump Tower. When I told The World Traveler that my husband, The Gryphon, and I have been watching The Apprentice for several seasons now, she suggested that we go inside and see if they were still selling the gelato that some previous contestants had developed as one of their challenges. 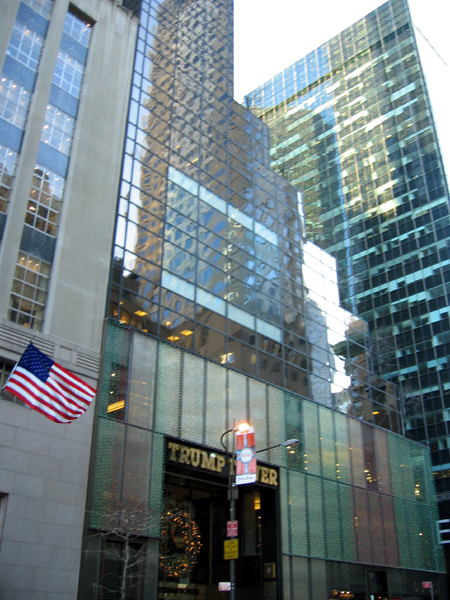 So we went inside and found the food court downstairs. As we were waiting in line for what we thought was gelato, My College Roommate pointed out they were only selling ice cream. After a brief look around, we decided they were no longer selling the gelato, so we didn't get any ice cream. After all, I'd only be curious to try the gelato but wasn't really hungry.

We grabbed a couple bottles of Trump Ice, which is The Donald's brand of water. Mostly, I bought it because I was thirsty, but the label amused me, so I kept it. The food court also sold hot dogs and other quick foods, so that the many tourists who visit can say they ate at Trump Tower. Or perhaps New Yorkers stop there occasionally for a quick bite while shopping. Who knows?

The interior was not quite as large as it looked on television, but it was very Donald Trump: lined with rosy granite walls and floors and polished brass. A three-story water feature on the back wall served as a back drop to a large Christmas tree. 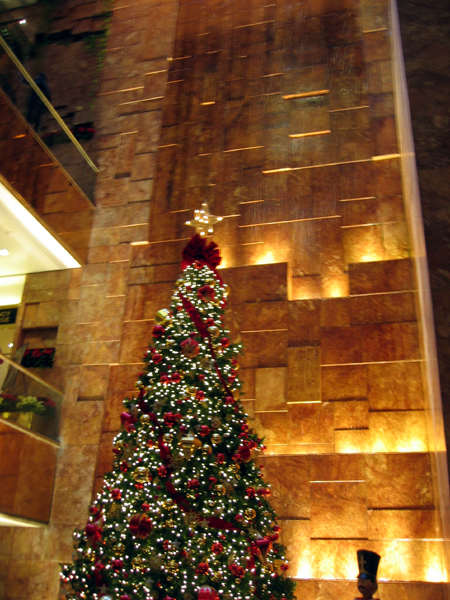 As we continued our tour, nearing some of the better-known department stores, the sidewalks became more and more crowded to the point where we could barely move. I found it difficult to take a normal stride. Just as I was about to put my foot down, inevitably someone would stop dead in front of me, and I'd have to awkwardly slam my foot down an inch further back. This made for a very uncomfortable, hesitant gait. There didn't seem to be many signs of relief.

When we passed the famous Sak's department store, we couldn't get close enough to view the windows. In fact, there was a line to get closer. We decided to view them from a distance instead. They involved a lot of moving parts, along with a fanciful story aimed at children. Turns out there are a number of videos of the windows posted by enterprising people on YouTube, though (here, here, and here).

We did step inside St. Patrick's Cathedral, though, which is perhaps the best-known church in New York City. My exterior shot wasn't terribly good, because of all the people. Inside, the cathedral was decorated for Christmas. People filled the pews, some of them praying, but most of the people wandering through appeared to be tourists like us. The nave was spectacular, with huge vaulted ceilings and stained-glass windows. After a couple tries, I got a decent shot, holding it above my head. 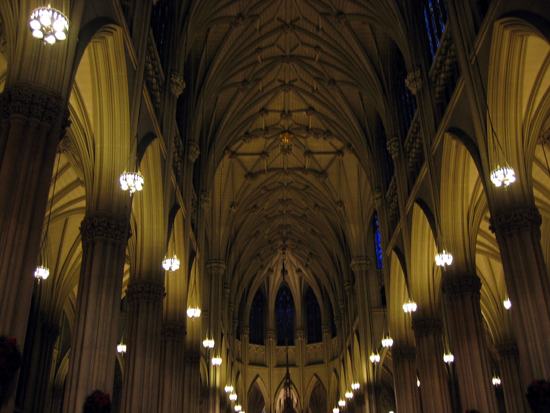 I had an easier time photographing the altar, by standing right behind a velvet rope. You can see a few Christmas wreaths on the columns. 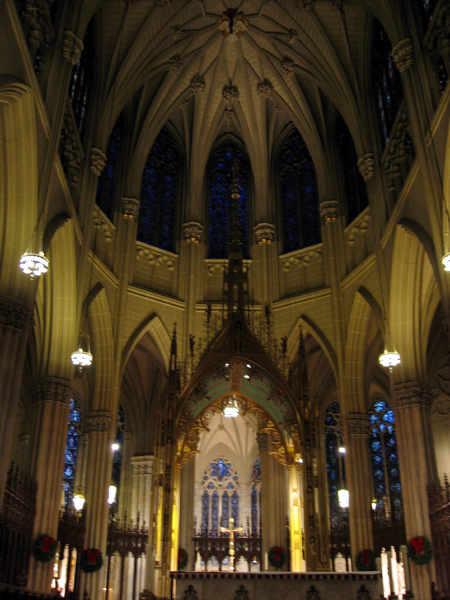 Next to the altar was a nativity scene, and a line of people was waiting to see it. Many of them, it seemed, wanted to say a prayer in front of the creche. The three of us, two Protestants and a Jew, were fine with viewing it from a distance.

Because the windows at Sak's were so crowded, we decided against Macy's, which was likely to be just as bad. Fortunately, though, I discovered a video on YouTube of the Macy's windows that lets me see what we missed.

We made our way towards Rockefeller Center to view the gigantic tree and the famous ice rink. 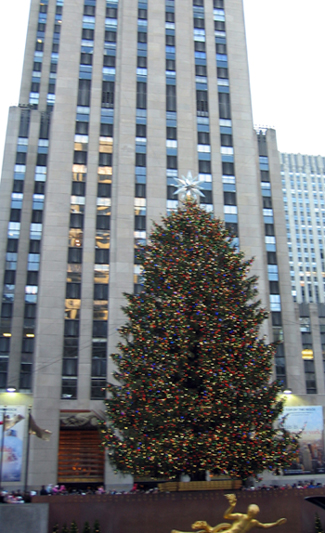 This again, was very crowded, partly because of bad timing. We didn't know it, but we were arriving just in the middle of a Christmas concert, featuring hundreds of brass musicians on the ice. At first, I thought we were listening to canned music, and I assumed the people gathered around the rink were watching ice skaters. But when I realized it was live music, I understood why there were so many people. Also, it explained some of the bad notes. While we were there, I got a good shot of the flags surrounding the rink. 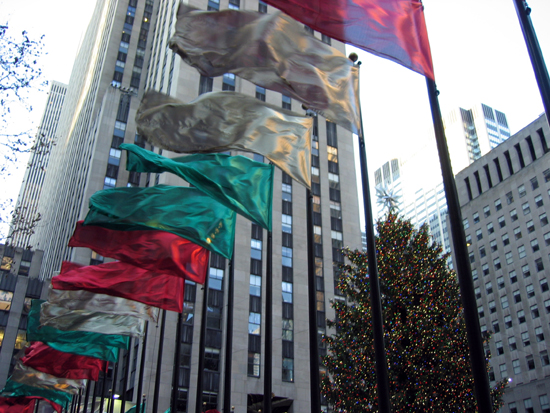 Although it's an enormous tree, the sheer size of the building behind it makes it appear smaller. Also, I think most of the time, you see shots from the level of the rink, which adds about 20 feet to the height.

As we made our way towards the tree, hoping for a better view of the musicians, I saw Santa Claus. Well, actually, this was a gentleman who happens to look a lot like Santa. In full knowledge of this, he wore a Santa hat and a sweatshirt that resembled Santa's coat. When I saw him, I couldn't help myself. "Oh, hi!" I said brightly. He smiled, as did his gray-haired wife. I'm sure he gets that all the time, plus requests for his picture. Or perhaps offers of cookies and milk.

The crowds surrounded all sides of the rink, which we found frustrating, but I did manage to get a good shot of My College Roommate and The World Traveler in front of the tree before we left. 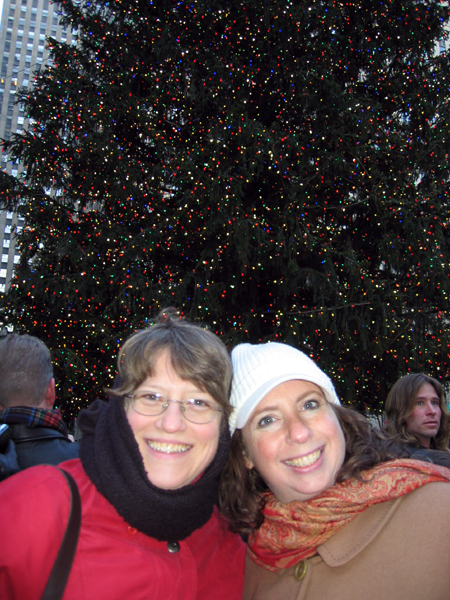 By this point, we were tired of the crowds, and that's an understatement. My lightheadedness had returned, perhaps from being in the crowd of people, smelling all the body lotions and scents. Plus, I hadn't had enough water to drink, so as we walked, I tried to finish off the bottle of Trump Ice.

The World Traveler suggested we head for Bryant Park, which every year hosts what it calls Holiday Shops for boutiques, artistans, designers and food merchants to sell their wares from little heated booths. We walked by many interesting booths, everything from homemade soaps and candles, to Christmas ornaments, to clothing and handbags, to jewelry, to more unusual artwork.

I stopped at a pet supplies booth and bought holiday dog cookies to distribute to the Wilson family dogs at Christmas. No cat treats, however, since our kitty, Luke, has food allergies.

Then we needed to find a restroom again, so The World Traveler suggested the nearby New York Public Library, which had also been on her list of things to show us. We walked around to the front and immediately were greeted with the famous steps flanked by lion statues, seen in so many movies. 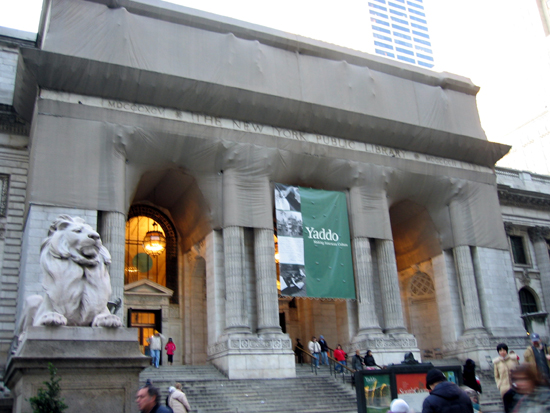 As we entered, My College Roommate asked, "Wasn't there a scene in the library in Breakfast at Tiffany's?"

"Yes," I answered. "And don't tell her any more. It's an important scene."

The World Traveler said, "I'm really going to have to get that movie now."

After finding the restrooms, we checked out the library, starting on the third floor and making our way down. One of the large reading rooms looked very familiar. The ceiling is also extraordinary, painted to look like clouds at sunrise. 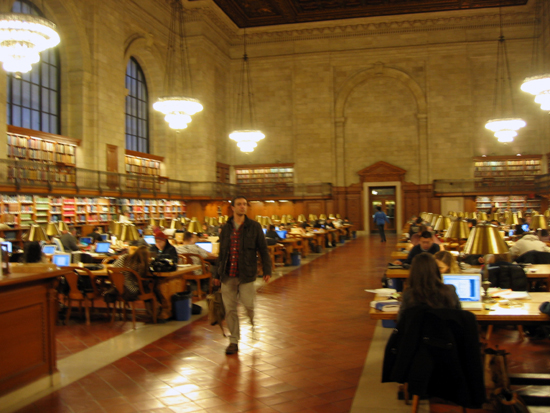 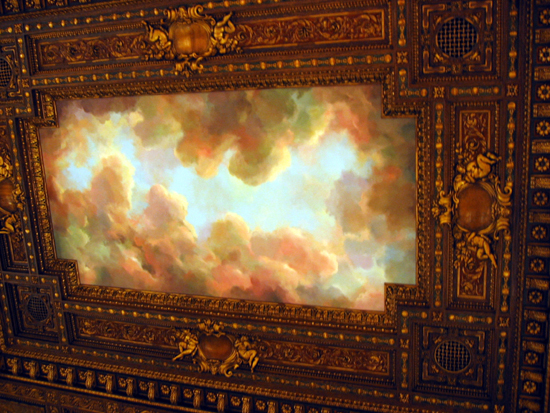 We also discovered a very interesting item, in its own display case. It was a handwritten version of The Tales of Beadle of the Bard, one of only seven that J.K. Rowling made. Since you couldn't page through it, next to it, a video showed a person flipping the pages and reading it. 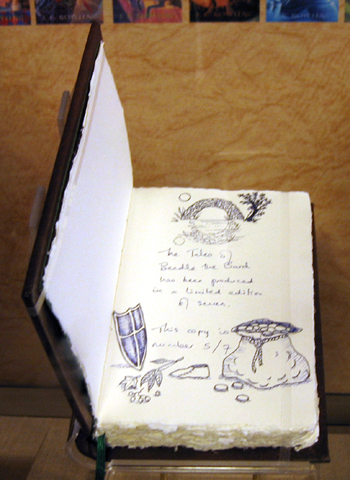 We then returned to Bryant Park to view the rest of the wares. As tempting as it was, I didn't buy anything else, for three reasons. First of all, I'd promised The Gryphon not to go overboard on my spending, so most of what I spent was on food, transportation and the theater ticket. Secondly, I didn't think I'd be able to carry too much extra stuff home with me. Third, I didn't need to look for Christmas gifts. The Gryphon and I have agreed that this year, all of our Christmas gifts will support various charitable causes. In fact, last night I was up until the wee hours, ordering gifts from the gift shops of various charities.

Among the shops were one we found particularly interesting. This artist, Metal Park, makes statues and figurines from used motorcycle parts. We especially liked his Star Wars collection. They were also fairly well priced when you consider the amount of work that goes into them. 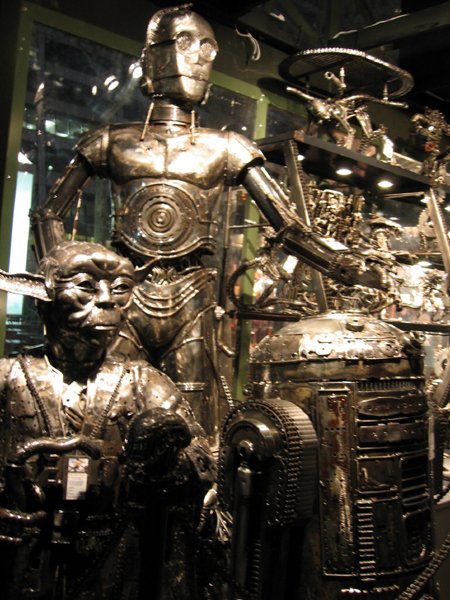 By the time we finished with all the booths, we agreed it was time for dinner. We actually had enough time to do what The World Traveler had wanted, to take the subway to the West Village to eat at a place run by a British expat called Tea and Sympathy. She promised us some good English cuisine, which seemed perfect right before seeing Spamalot.

(Next time: Tea and Sympathy, Spamalot, and Big Daddy's Diner)

When everybody crowds in to try and see something, no one gets to see it.