On our final day in New York, we meant to get up early and go to Chinatown, but even though my internal alarm went off at 8:30, I kept hitting the invisible snooze and didn't actually wake until 9:15. I doubt the extra time would have made much difference, since My College Roommate and I had a train to catch at 2:30.

So instead, we stayed in the Upper East Side, with plans to get breakfast and then do a little shopping. 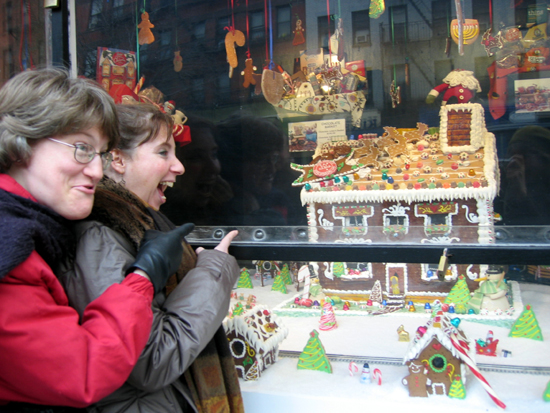 The World Traveler wanted to get dim sum, but none of the local places were open for breakfast that early on a Sunday. New York may be the city that never sleeps, but when they do sleep, they sleep in.

The next idea was to get fondue at one of the brasseries in the neighborhood, which are French cafes that double as restaurants with a relaxed setting (at least, according to Wikipedia). But again, they weren't open until something like 11, and My College Roommate was starting to get lightheaded, so we needed to eat.

After walking around a couple blocks, we finally settled on an unassuming restaurant which, from the outside, looked like it might just be a deli. Turns out they were actually a restaurant and offered a nice selection of breakfast foods. For the life of me, though, I can't remember the name of the place, just that the name was something ordinary, unremarkable, like perhaps City Market Cafe (although I've looked at their menu, and it doesn't seem quite right). Maybe, when The World Traveler reads this, she can fill me in. [ETA: She tells me that the place was Eli's. So now you know.]

I ordered the whole grain pancakes and a fruit smoothie, made from strawberries, bananas and apple cider. And, of course, coffee. I love that in New York, they ask you if you'd like cream, milk or skim milk. Since I've returned, I've been starting a lot of sentences with, "In New York, they..." My husband, The Gryphon, is hoping I'll tire of it soon.

One relaxing breakfast later, we roamed the streets, window shopping and also checking out the street vendors. My College Roommate found herself a nice shoulder bag for a reasonable price (half the price of one we'd seen in a store). She and I both bought cashmere scarfs from another street vendor. Mine has a green plaid pattern with accents of purple. When I returned home, I showed it to The Gryphon. "Guess how much?" I asked.

I threw it at him. He was right. It's incredibly soft though, and the tag says it was made in Scotland, home of my ancestors.

You can find all sorts of great deals in New York, which The World Traveler was happy to tell us about. Over the course of the weekend, almost every time we admired something she was wearing, she told us the price and where she got it. Yet another reason that The World Traveler and I are friends: we think so much alike. Very often can I take a compliment on an item of clothing without adding, "Twenty bucks from Marshall's" or "half price at DSW."

We checked out a couple children's stores, looking for possible gifts for My College Roommate's son, who is 3 1/2. The World Traveler was also looking for something to get her niece, and she really liked a pair of cute pink boots in one of the clothing stores. She needed to check with her sister first, though, to make sure it was something she needed.

In addition, we checked out a couple other places, and we admired the handiwork of one of the bakers, who had an extravagant gingerbread house in the window. 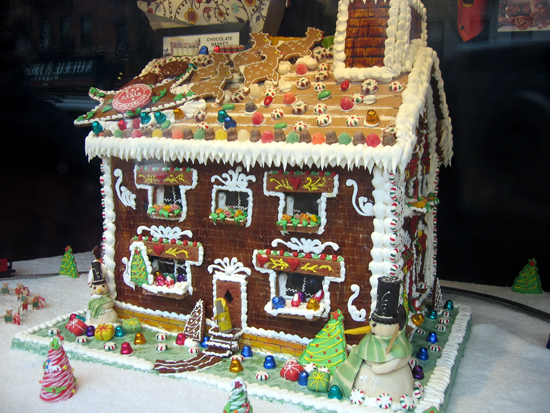 We stopped in a Barnes and Noble to do a little book browsing. I saw the calendar section and remembered that I need a 2009 planner. The World Traveler found me a really cute one, called "Pooped Puppies." It features a new picture of a sleeping (or yawning) doggie every week. Must. Have. The only issue was whether it would fit on my desk, where I normally keep it, because it was a little bigger than a standard planner. The World Traveler suggested, though, that I could always return it at my hometown Barnes and Noble if it didn't work out, so I got it.

That was the last thing I bought, although at times it was difficult to restrain myself. Next time, maybe I'll bring an extra bag to fill with purchases, like I did when My College Roommate and I took a trip to London with the Scholars Program, back in the day.

When it was time to go, we packed up our bags, said good-bye to the kitty, Ziggy, and went outside with The World Traveler, who hailed us a cab on one of the busier streets near her place. We hugged her and thanked her for the weekend.

The cabbie got us to Penn Station in record time, and we tried to find our track. Then we learned about a strange idiosyncrasy of NJ Transit. The boards told us whether certain trains were on time but not what platform. Instead, we had to stay in a waiting area until the announcement was made, at which point everyone rushed to the platform. I suppose it's a security precaution.

We had a little trouble finding two seats together, since many people were leaving from a weekend in New York. Finally, I asked a man who was about to sit by himself next to an empty seat if he would mind switching. He said that was fine. I was glad, because on this first leg of the trip, there were no racks to place my luggage. I felt better about squeezing into the seat with all my luggage next to My College Roommate than with a stranger.

At Trenton, we had a little more of a wait. The system there was a little easier to understand, with the boards giving the actual platform numbers. We chatted while we waited for the train to arrive, and helped a woman who was also going to Philly figure out which platform.

On the way back, I got a photo of the sign we'd found amusing when we first saw it, in the dark, on Friday night. This is actually a much better photo than any I would have gotten in the dark, since I would have had to turn off the flash, and it would have blurred. In case you can't read it, the sign on a bridge says, "Trenton Makes, The World Takes." I'm not sure whether they're bragging or complaining. 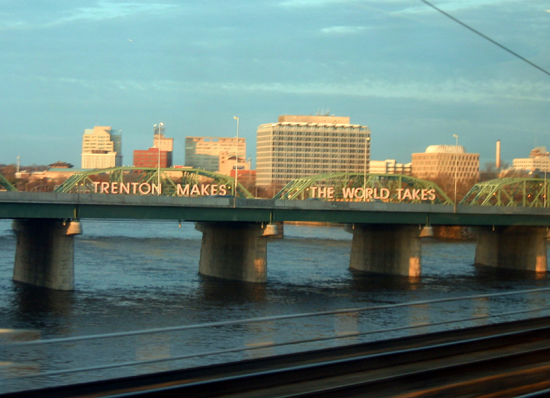 Returning to Philadelphia, it seemed quiet, relaxed, filled with trees and flowers. I understood, then, why a New York City writer, upon coming to Philadelphia for a reading several years ago, had told me Philly was "quaint" and "charming."

As exciting as the weekend was, it was good to come home to The Gryphon and our pets, Una and Luke, waiting for me in our little rowhouse that suddenly seemed spacious.

Moral:
A $5 cashmere scarf is just as soft as a pricey one.