The last weekend before Christmas had its ups and downs. The ups: Friday night, when we attended the holiday party for my husband, The Gryphon's, workplace. It was held at Maia, a restaurant and market in Villanova.

After meeting his coworkers, I can see why he loves it there. They were a group of young professionals with a sense of humor who clearly love what they're doing and have a vision for the future. 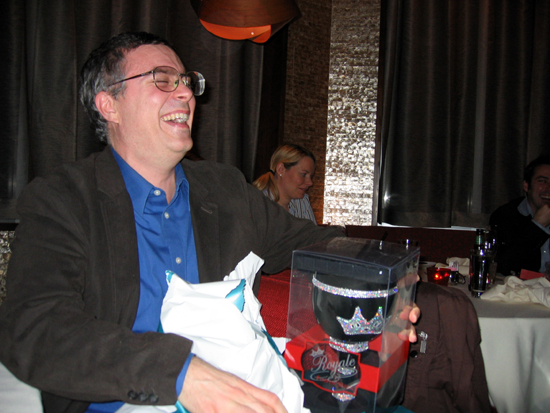 The Gryphon unwraps his pimp cup.

We had a little trouble finding the party but then found it, at the far end of a room on the second floor. Everyone was having cocktails, and the wait staff brought out small buns with pickles, meats and mustard as an appetizer.

As we chatted, his coworkers shared animal-related stories, such as when one woman went SCUBA diving and petted a nurse shark. Then we were seated for dinner with a guy who's about 10 years younger than us and whose personality and mannerisms reminded me of a Kevin Smith movie. He had such a fresh way of talking that it was fun to have a conversation with him.

For dinner, you could select from three entrees. I chose the scallops, which were fantastic. We also got a salad of microgreens, which had a few candied pecans. Yum. The scallops were served on top of some mushrooms and a little potato, with black truffle sauce. They were done to perfection. Dessert was a sampler plate of three desserts: chocolate, lemon custard and a chocolate cookie. They were little bites that added up to a terrific dessert.

The highlight of the party was the exchange of the Pollyanna gifts that the coworkers had gotten each other. Most of them were gag gifts. The Gryphon received a red Santa pimp hat and a pimp cut, encrusted with rhinestones, which everyone insisted he had to use to drink coffee at work. The hat was no doubt inspired by the fact that, on a daily basis, he wears a brown wide-brimmed hat that many people think looks like its out of the Australian outback. 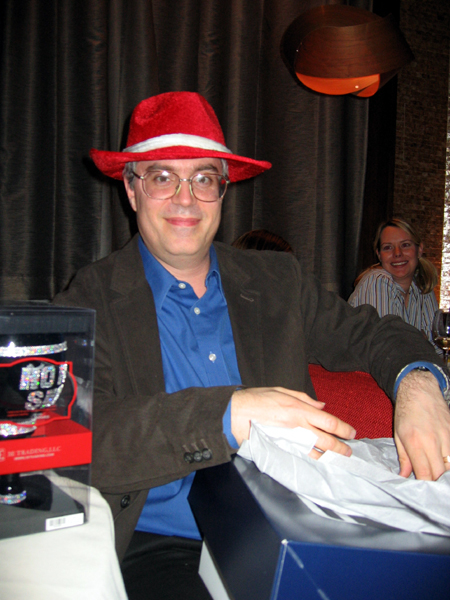 Various people tried on the hat throughout the night, which was probably one of the most popular gifts, as judged by the response. I think the hat looks better on him, though, than it does on me. 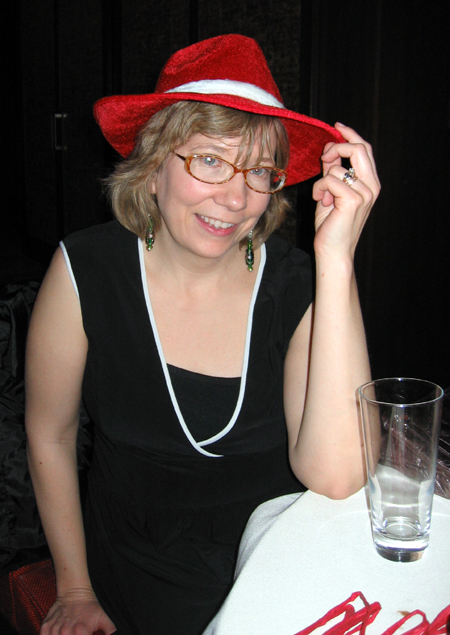 So all in all, we had a nice time, and I'm excited about him working with this group of people. If you haven't read his blog, he's accepted a permanent position there, with advancement potential.

But as I said, the weekend also had its downs. Or rather, maybe I did. The end of the year does funny things to me. I'm sure I'm not the only one, but the only thing I can think of, as we get closer to the end of December, is how little I've accomplished and how much I meant to accomplish.

I completely lost my stuff Saturday morning, after completing the Christmas cards and running them to the post office, much later than I normally send them. When I checked our mail, upon returning home, I found a letter addressed to somebody who doesn't live here and, for all I know, never has. The Gryphon suggested that I take it back to the post office, and I threw it across the room.

"That's what I think of that letter," I said, dissolving into tears.

He was, of course, completely bewildered. "What's wrong?" he asked. But in answer, all I could do was cry. I didn't want to tell him, because he's always telling me that I'm too hard on myself. But all I could think of, swirling around in my mind, was the things I had wanted to accomplish, not just this year, but in my life so far. How much I'd left undone.

Eventually, I calmed down enough to explain what I was feeling. He was sympathetic, but I don't think he really understands what it's like to be a perfectionist and to see nothing but imperfection.

Finally, I let him hug me and smooth my hair. He told me that he'd like to help me with some of the holiday preparations I've been doing by myself and promised, if I give him a list, he'll wrap all the gifts.

Then we went upstairs together so I could work on the Winter issue of Wild Violet. I never got a Fall issue out, so I'm going to do a big double issue for Winter instead. Seems like this has happened for the last several years, at least once a year, and I always feel horrible about it.

As I was dropping him at the train station Sunday evening to go to his weekly meeting of Philadelphia Area Gaming Enthusiasts (PAGE), The Gryphon told me that sometimes I focus too much on what I haven't accomplished and not on what I have. Looking back at my resolutions from last year, I realized that I've made progress towards nearly all of them. Here's what I have done this year:

On top of that are the daily accomplishments I rarely think about, such as taking care of our doggie, Una, and kitty, Luke; cleaning the house; doing laundry; cooking meals and packing a daily lunch for The Gryphon; not to mention all the unanticipated challenges.

At heart, I know The Gryphon is right. I've simply got to put things in perspective, look at what I have achieved, and keep reaching for the stars.