The day after Christmas was pretty quiet in rural Central Pennsylvania, especially since most members of my family had to work. My Dad, an osteopath, had his regular business hours. I had some work assignments, and The Gryphon had to do some programming. Both my sister and her husband also had work to do. So our afternoon on Friday was quiet, with everyone staring at laptops and buckling down. 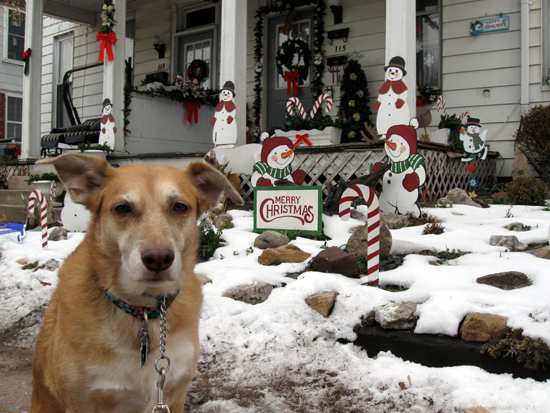 Una seems nonplused by all the snowmen
(faster-loading version)

But I took Una for a walk and used the opportunity to take some interesting photos with my new camera. I'll share some more artistic pics later this week, but today I'll focus on the lighter side of Christmas decorating in my hometown. 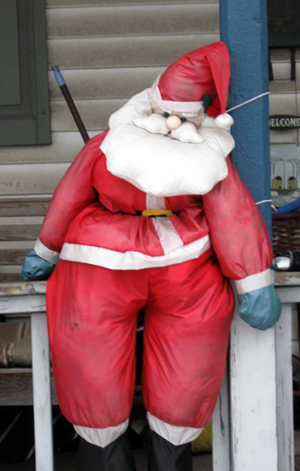 Santa seems a bit dejected that Christmas is over.
Or maybe because he's tied to this porch railing.
(faster-loading version) 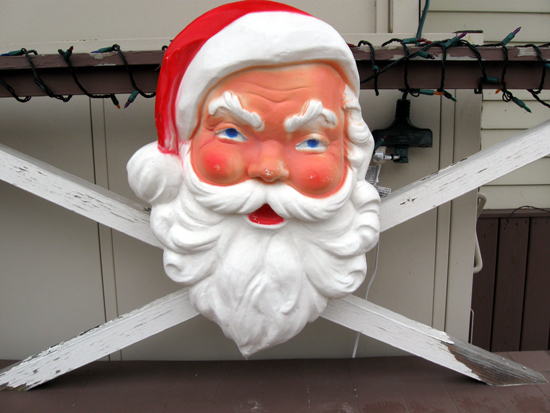 This is clearly the home of a very naughty person.
(Faster-loading version) 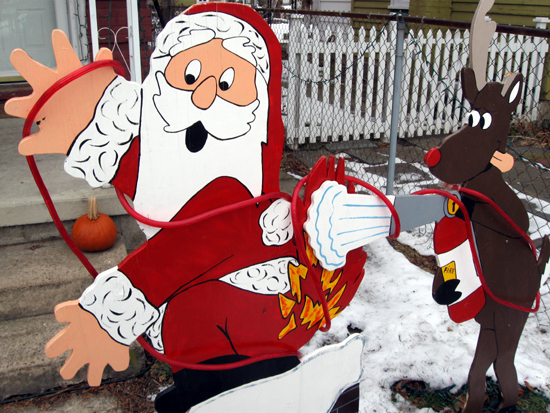 Apparently, somebody didn't realize you shouldn't
build a fire in the fireplace on Christmas Eve.
(Faster-loading version) 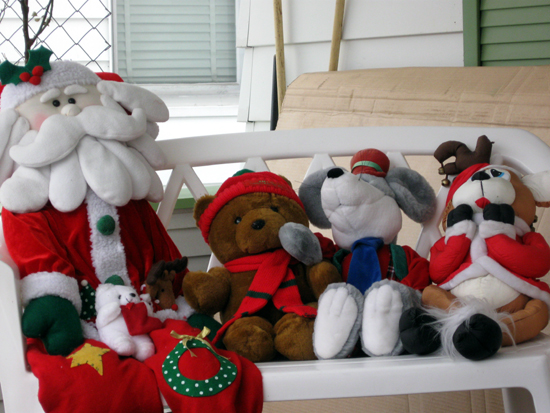 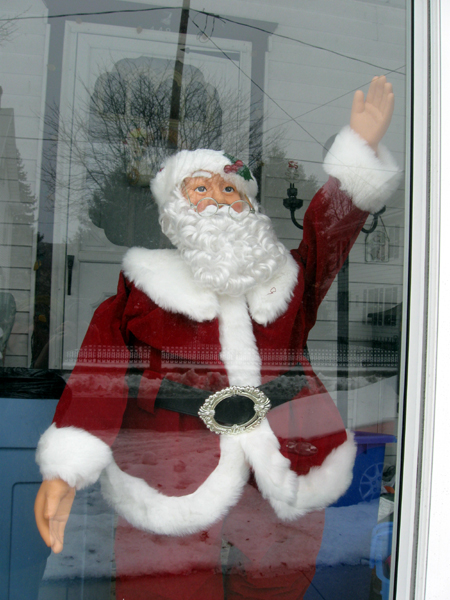 Santa, his glasses hanging off his face, tries to hail a taxi,
but there is no taxi service here.
(Faster-loading version) 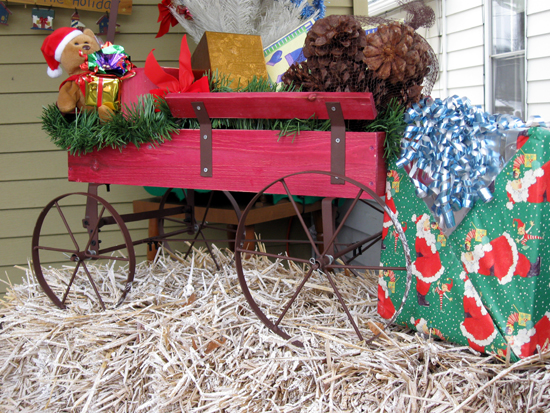 Because nothing says Christmas like a hay bale.
(Faster-loading version) 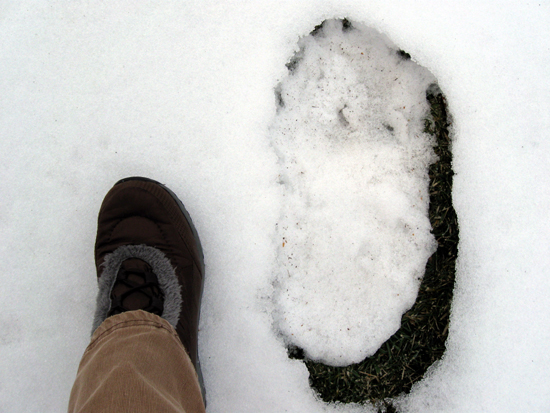 I'm not sure, but there might be a Sasquatch loose in Central Pennsylvania.
(Faster-loading version)

In addition, I ran a few errands with The Gryphon: getting an adapter from the Verizon store so that I can charge my recently purchased phone, buying a camera bag and rechargeable batteries from Staples; got some anti-itch cream for Una from the pet store; and picked up shampoo and conditioner from the drug store.

We ate lunch at a little lunch counter located in a furniture outlet, which happens to be right next to a farm. Still, we didn't expect to be greeted by a very friendly turkey, who appeared to be begging from us. The turkey was adorable, making cute little sounds. It seemed to really like The Gryphon. 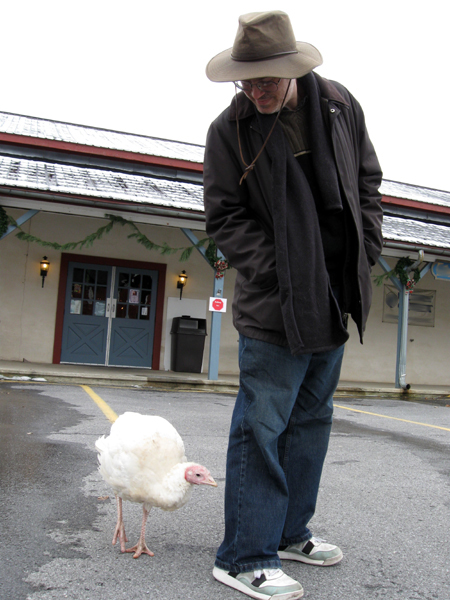 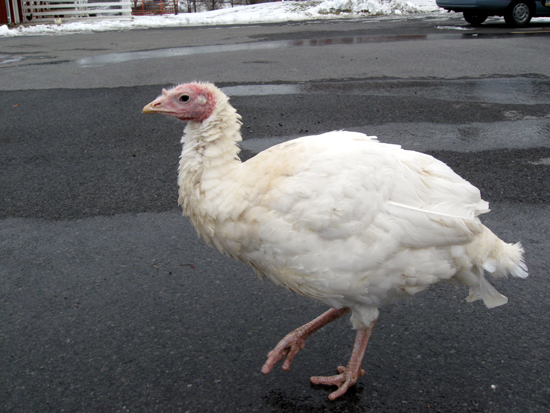 Of course, when we looked at the menu and I noticed most of the sandwiches had turkey, I ordered a vegetarian wrap instead!

For dinner, my sister's husband made a really mean chili. He made two batches: one milder for my Mom, who can't handle spicy food. We served it with miniature corn muffins, provided by Mom, and a salad I made up from the ingredients Dad had purchased earlier. My sister and her husband also contributed a bottle of red wine they'd brought.

That evening, we watched The Pursuit of Happyness, which is a Will Smith movie I'd brought with me. Everyone seemed to like it and were very interested in also watching the interview with the real Chris Gardner that came with the movie.

On Saturday, Dad was the only one who had to work. My sister, was anxious to get out of the house, so she and I took a morning walk with the dogs. I took my camera with me, because I wanted to get a photo of a shop window I'd seen the previous evening. A hair stylist, who apparently wanted to both show off her up-dos and celebrate the season, found a strange compromise, with disembodied heads floating in a sea of fake snow. 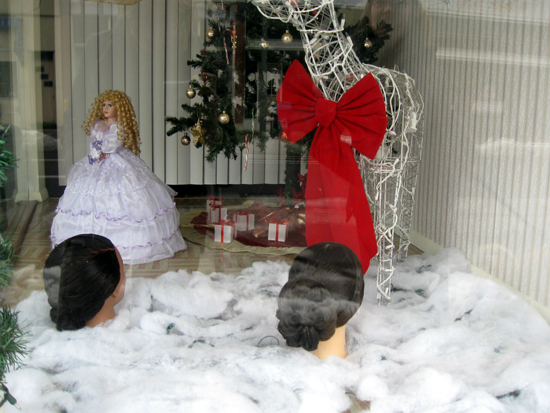 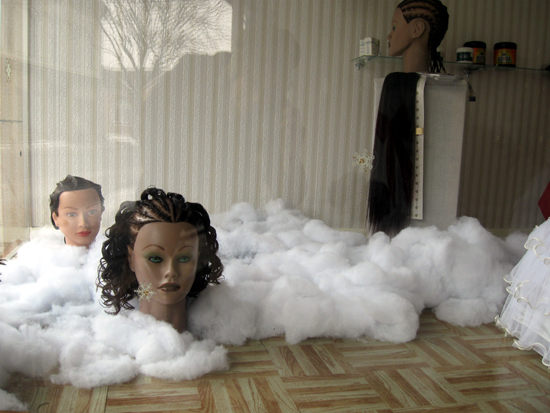 We drove, then, to my Mom's house to discuss what to do the rest of the day. She was busy that afternoon, but we called one of her favorite restaurants to make dinner reservations, a converted railroad stations. You see a number of them in Central Pennsylvania: railroad stations converted into restaurants, businesses, or municipal offices.

My sister wanted to drive to the local mall to return a shirt she'd bought for her husband for Christmas. He roots for the Washington Redskins, his hometown team, and she'd bought him a T-shirt with the old logo (which predates the Native American caricature). But the store clerk had neglected to remove the security tag, and when she tried to remove it herself, she damaged the shirt. So we called first to make sure the mall had a Champ's.

On the way, we utilized my sister's big Christmas gift from Dad: a Garmin Nuvi, or GPS navigator. If you input an address, it will give you directions to get there. We were completely entertained by the system, which became a running joke. When we were walking somewhere later, someone would say, in a computerized voice, "Turn left in ten feet." Or we'd give other, more malicious computerized commands, as if the computer had gone insane, HAL 900 style: "Go jump in the river in 50 feet."

The mall was surprisingly crowded, probably from people making exchanges or using gift cards, as well as scouting out sales. It's always interesting to go to a mall in rural Pennsylvania after shopping in, say, New York or Philadelphia. You see a lot more baseball caps. And camo.

For lunch, we had coffee and sandwiches at a little coffee shop, then returned the shirt. The manager at Champs was very helpful, and although they didn't sell Washington Redskins gear (this was Pittsburgh Steelers territory), my sister's husband exchanged the shirt for a very nice Penn State hooded sweatshirt. The manager advised my sister to call the customer service number anyway, to inform them about the mistake so that the original store could be notified and avoid making similar mistakes in the future.

While the men checked out the bookstore, my sister and I shopped for dress boots for her at Payless and then at the Burlington Coat Factory. We didn't find anything suitable, but we did find some absolutely hideous hightops. And yes, they were in the adult women's section, not the little girls' section. I can almost hear someone arguing to Clinton and Stacy of TLC's What Not to Wear: "They're dress shoes. See, they're shiny!"

This photo, by the way, is taken with my cell phone camera, the V Cast Messaging Phone by LG. It gets much better pics than my previous cell phone. 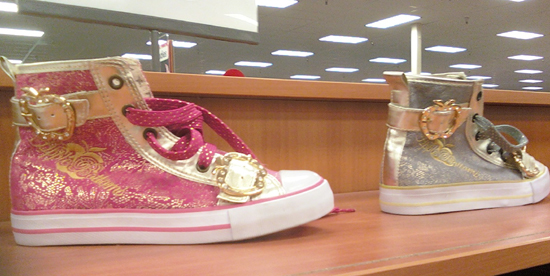 The only thing I purchased while at the mall was a new set of snow booties for Una, whose feet are really sensitive to ice and rock salt. Back at Dad's place, I tried them on. They seem like they might stay on a little better than the previous set I used. 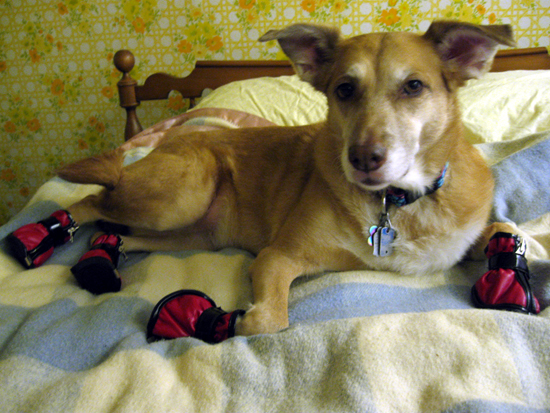 After I took a nap, Dad helped me to walk the two dogs. We returned just in time to get ready and then meet Mom for dinner at the restaurant. Mom beat us there and had already ordered herself soup when we arrived. Instead of a bread basket, the restaurant offered a little container of crackers, bread sticks and two different types of cheese spread. It was a nice idea, even though the cheese was commercially made and a bit salty.

I ordered a tuna steak, medium rare. It was overdone and fairly bland, but at least it was a fairly healthy dinner. Afterwards, we all ordered desserts to share. That part might not have been as healthy, I'll admit.

We had talked about seeing a movie, but we'd missed the 7 p.m. showings, so we played a board game instead. This was the game The Gryphon and I gave Dad for Christmas, since the company, Kvale Good Natured Games, supports environmental causes. The game is designed to increase environmental awareness and is called Bioviva.

At the beginning of the game, as we were still reading the rules, I tried a few shots using the timer on my new camera. I didn't have the settings quite right and after fiddling with it a few times, I quit. That's something I'll have to experiment with again, after reading the book. 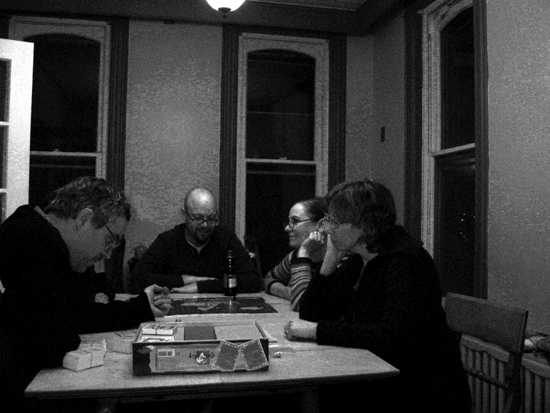 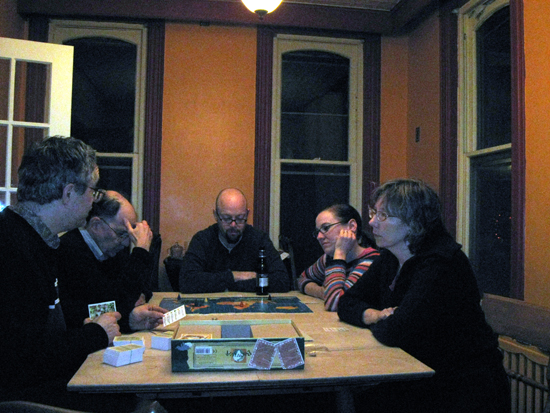 Bioviva is an environmental trivia game. Players move their markers around a map showing the different environmental regions, such as tundra and temperate forest. Their goal is to answer enough questions to earn 12 eco-points and thus win the game. Those points are acquired by landing on the squares that apply to the appropriate environmental regions which each player needs to acquire. Then, the player needs to answer a multiple-choice question correctly. Each person has a different combination of 12 eco-points to seek, based on cards drawn randomly at the beginning of the game. Each round, all players offer their answers to the same question, and then those who get it right have an opportunity to earn eco-points.

However, winning eco-points is not a guarantee, even if you answer the question correctly. Rather, it depends on drawing another card, which tells you what action to take. Sometimes, in fact, you lose eco-points. We found this aspect of the game to be very frustrating, especially when it happened multiple times in a row. We believed this was bad game design: that players could be punished for answering questions correctly.

Clearly, the action cards were an effort to extend game play and make it more exciting. But we felt the cards should be drawn at a different stage in the round, so that it's not directly connected to answering the question right. Maybe everyone could receive eco-points for receiving a correct answer, and the action card would be drawn afterwards.

Another flaw in the game design was the reliance on colors to indicate important information. The cards are double-sided, which of course, saves paper. However, the colors of the two sides are a grayish red and a grayish green, which colorblind people would find indistinguishable. It would have been better if, in addition to being a different color, the two sides were also marked with different symbols.

In the same way, the markers used to indicate eco-points collected include a number of shades of red and green, all at a similar saturation level. This again poses a problem for those who are color blind. It would have been better if each of the markers also contained letters, indicating the environmental zones.

The zones on the board were often marked with the name of the zone, but in some of the smaller sections, they were not marked. This could have been addressed by including different background patterns: say hash marks or stripes or dots, so that they would still be easily distinguished, should anyone have difficulty identifying the colors.

We did like several aspects of the game. In particular, we found the questions to be challenging and interesting. We also liked the movement around the board, which is controlled by rolling a die and then moving in one direction. But the game doesn't offer much interactivity between players, so many game aficionados would become easily bored.

We didn't realize, until The Gryphon looked it up online, that the game was developed in 1996. This would explain why the box bragged about awards received in 1998 and 2000. It certainly might be time for an update, and if they do update the game, they should consider revisiting some aspects of it.

Still, we agreed that we would play the game again, although we might institute some of our own home rules to improve the enjoyment.

Sunday was our last day. We spent a quiet morning, waking up gradually. Then my sister, her husband and I returned some items to Mom. She wasn't home, since she was helping with a few things at the church, so we stopped by to tell her good-bye. Mom hugged us all and told us how much she'd appreciated seeing us over the holidays.

Then we packed up and headed home. Much as it had on the way there, the skies opened up with rain.

Moral:
The days after Christmas are rough for Santa.